About 20 years after World War II, strange concrete sculptures began to spring up in the Yugoslavian countryside. Some looked a bit like flowers, others like fists—but they were all unique, an entrancing blend of futurist design with elements of Brutalism. In his new book Spomeniks, photographer Jonathan “Jonk” Jimenez documents his trek to see and shoot about 50 of these sculptures, covering two years of travel and about 5,000 miles across seven countries in southern Europe.

“These Spomeniks can come in the shape of an isolated sculpture, or be part of parks or memorial complexes including tombs, crypts, or ossuaries that still contain the remains of the people they commemorate,” Jonk told Smithsonian.com. “There were thousands of them, scattered across Yugoslavian territory. In the 1980s, they had a very important social role and attracted hundreds of thousands of visitors every year, in particular young pioneers for their communist and patriotic education.” 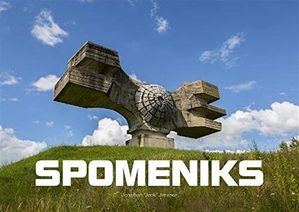 Pushing architecture to its limits, Spomeniks are what happens when brutalism, symbolism, space age aesthetics and abstraction meet.

“Spomeniks” is the Serbo-Croatian word for “monuments,” which is exactly what the sculptures are. Most of them were constructed in the 1960s and '70s by local communities, during the regime of Yugoslav dictator Josep Broz Tito, to commemorate important sites from the lengthy fight, called the National Liberation Struggle, endured decades earlier against the Nazis. Often, construction was ordered by local communist parties to honor fallen resistance fighters and civilians. In many cases, local architects designed the structures. In Spomeniks, the name, location, architect, completion year, and historical background accompany every monument photo.

“I love those that hold a strong symbolism,” Jonk said. “The monuments at Jasenovac, Podhum, Zaostrog, Gevgelija, Gligino Brdo, and Grmeć all use a similar flower in the design. This flower represents renaissance and life, and is undoubtedly the strongest symbol when you take into account [when] these monuments were built.”

Jonk suggests that in addition to these, everyone should try to see the spire-like spomenik in Kosmaj, Serbia, designed to represent the spark of liberation. His other must-sees are in Jasenovac, Croatia, and Nis, Serbia. Both are built on former massacre locations. In Nis in particular, the monument is quite evocative—shaped like three raised fists, all of which symbolize defiance and resistance. But the fists are different sizes, one each for a man, woman, and child, created to represent the families that perished during the war.

Be warned, though; not all of the monuments are easy to find, even with GPS by your side. Some are far off the beaten path, accessible only by hiking. And some, like the one in Novi Travnik, Bosnia and Herzegovina, are in an area still dotted with landmines. But others are readily available and used on a regular basis for annual ceremonies, picnics, or even just sunbathing.

No matter where they are, though, all the monuments bring with them a reminder of a very important time in history. "The Yugoslav experience of fighting against [fascism] on the basis of intercultural solidarity—and, also, of failing to maintain that memory, and of its collapse in the 1990s into resurgent fascism—has much to tell us," Owen Hatherley wrote for The Calvert Journal. "These monuments are its concrete legacy, intended to speak of what Yugoslavs had emerged from, how they wanted to be remembered, and what they hoped for."