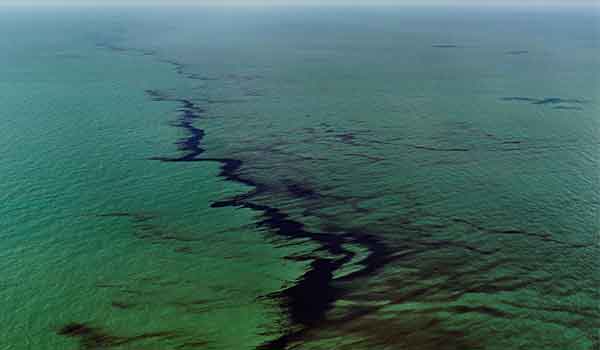 The Sad Truths Behind These Unsettling Works of Art

Talk about unsettled. Just as a new exhibition titled “Unsettled Nature” that combined art and science—and the expertise of two Smithsonian museums—was about to open at the National Museum of Natural History in March of 2020, all the museums and much of the country shut down due to the Covid-19 pandemic.

In the subsequent months when headlines were also dominated by uprisings for racial justice, a number of climate disasters occurred that underscored the seriousness of human-created climate change. As the number of hurricanes increased, the nation experienced a deadly spate of wildfires and temperatures of 130 degrees Fahrenheit were recorded in Death Valley the highest ever reliably recorded on Earth.

Scientists have been sounding the alarm for decades. And the Natural History museum has tried to stress the point as well. But, as the museum’s Scott Wing says, “somehow those messages don’t always get across.”

So the curators turned to art.

“For a science museum to have an art exhibition is a recognition that we need to learn many ways of communicating,” says Wing, a co-curator of the exhibition whose full title is “Unsettled Nature: Artists Reflect on the Age of Humans.” “Laying out observations and deductions is not necessarily the most effective way for people to confront something that is ultimately emotional.”

The show finally gets to open, 15 months after it went up, when the Museum of Natural History reopens for the first time since March 2020 on June 18. It will be the newest draw in a museum that houses the Hope Diamond and the Nation’s T-Rex and was top draw among all Smithsonian museums in the last full year of stats, with 4.2 million visitors in 2019.

So in a modest gallery not far from the Mammal Hall, a visitor may be drawn to the beautiful colors in the aerial photography of Edward Burtynsky or the iridescent green in a geologic photograph by David Maisel, only to learn some sad truths. Burtynsky’s dreamy, dark edge of green sea in the Gulf of Mexico is actually a visual record of the largest marine oil spill in history—the 2010 Deepwater Horizon disaster, and Maisel’s image depicts an open pit mine, the source of mercury emissions that are the result of gold extraction.

Both photographers are equally fascinated by the strange beauty of industrial mining sites. Maisel’s birds-eye-view of a tailings pond in the Miner Centinela Copper Mine resembles at first a sensitive abstract.

Both Wing and his co-curator, Joanna Marsh, the deputy education chair and head of interpretation and audience research at the Smithsonian American Art Museum were well aware of the work of Burtynsky and Maisel.

“That was a nice place to start,” Marsh says. “In fact we looked at their work first, having some common ground in a way to start thinking about and talking about the themes of the show.”

Burtynsky’s photograph of human-made rectangular pools in blue and green tones in the Atacama Desert, resembles super-sized color swatches. Yet there is a complexity to the shot: While it seems as though the desert has been given up to unnatural toxic pools, Wing says, “it’s going to make lithium, which makes batteries for electric cars,” a technology that would help reduce a carbon imprint.

The battle between man and nature is illustrated simply in Feral Landscape Typologies, a series of photographs by Ellie Irons, chronicling a single Brooklyn street corner where invasive plants grow on an empty lot.

“It started with this lot overgrown and then at various points cleared, and grew again.” Marsh says. “We liked the ambiguity of not knowing how to read it.”

Whether it’s an eyesore or tenacious greenery bringing life to an urban environment is left up to the viewer. “Hopefully, it encourages people to think for themselves about what they want in their environment,” Wing says.

Texas photographer Dornith Doherty documents seed banks, the “global botanical backup system” for preserving crop diversity, finding patterns and an almost abstract beauty. X-raying corn kernels (or seeds) in a lenticular photograph subtly changes the colors when viewed. “She chose that medium to comment on evolutionary change in the specimens she was photographing,” Wing says.

Famine is an X-ray of a blight-resistant potato plant in which Doherty shows the beautiful leaves of a crucial human crop, the potato, which originated in Peru, was taken to Ireland, where it fed the country until it didn’t, leading to a famine and mass migration to America among other places.

Dornith’s X-rays of the cross section of the Wollemi Pine with its repeated circles and swirls, resemble at first pop art. Then one may learn the history of the coniferous tree known initially only through fossils until a group of living trees were found in an Australian rainforest in 1994.

“It was literally like finding a dinosaur, a living dinosaur, not a fossil dinosaur,” Wing said. Still, they remain endangered, and the one stand left in the wild was nearly wiped out by the devastating Australian fires last winter.

The show encompasses more than photography, with the largest space given to Bethany Taylor’s woven tapestries of varied ecosystems, each tied to fiber drawings of animals and plants and some unexpected things, from cars to oil cans to a skeleton in a raincoat. And some threads just pile on the ground.

“These unraveled threads are a comment on the fragility of the ecosystems that she’s representing—in this case the Amazon, the Arctic and the Northeast,” Marsh says. “The idea is to prompt our thinking of the connectedness of these ecosystems.”

Providing an ominous underscoring for the entire exhibition is the solemn intonation from an old upright piano for a sound art piece, entitled Music for Elephants by the Chicago-based artist Jenny Kendler. For 10 minutes each hour, visitors hear what seem to be random notes from the scroll of an antique 1921 player piano. The score was derived from projected rates of African elephant deaths due to poaching over the next 25 years if current trends are followed. Transcribed into musical notes, the lower, longer notes indicate years with a higher number of poaching deaths until, just 25 years from now when no elephants remain. Then comes silence from piano, which like most in that era, had keys made of ivory.

If the work by Chicago-based artist Andrew S. Yang seems like a science experiment, it may be because he also has a background in biology. A witness to the deaths of migrating birds after hitting skyscraper windows, and realizing the seeds they carry are not given a chance to germinate, he has collected dead birds, which he calls “winged couriers for the future generations of plants” and removed the orphaned seeds, planting them himself in what he calls the Flying Gardens of Maybe.

Had the seeds planted for the opening in March 2020 been watered these 15 months it may have created quite a jungle. Instead, COVID disruptions meant a new set of seedlings had to be planted just before the museum’s coming reopening June 18.

“I wonder if there is a human interest story about the exhibit that closed before it opened,” Wing says. Last October he mused, “So strange that a tree fell in the forest almost seven months ago and still hasn’t made a sound.”

“Unsettled Nature: Artists Reflect on the Age of Humans” will be on display at the Smithsonian’s Museum of Natural History when it reopens June 18. Timed-entry passes will be required, beginning June 11 at 12:30 p.m. Initial museum hours will be Wednesday through Sunday, 11 a.m.-4 p.m., with the entry limited to the National Mall entrance. Visitors age 2 and older must wear face coverings and social distancing will be enforced.

About the Author: Roger Catlin is a freelance writer in Washington D.C. who writes frequently about the arts for The Washington Post and other outlets. He wrote for many years at The Hartford Courant and writes mostly about TV on his blog rogercatlin.com. Read more articles from Roger Catlin and Follow on Twitter @rcatlin