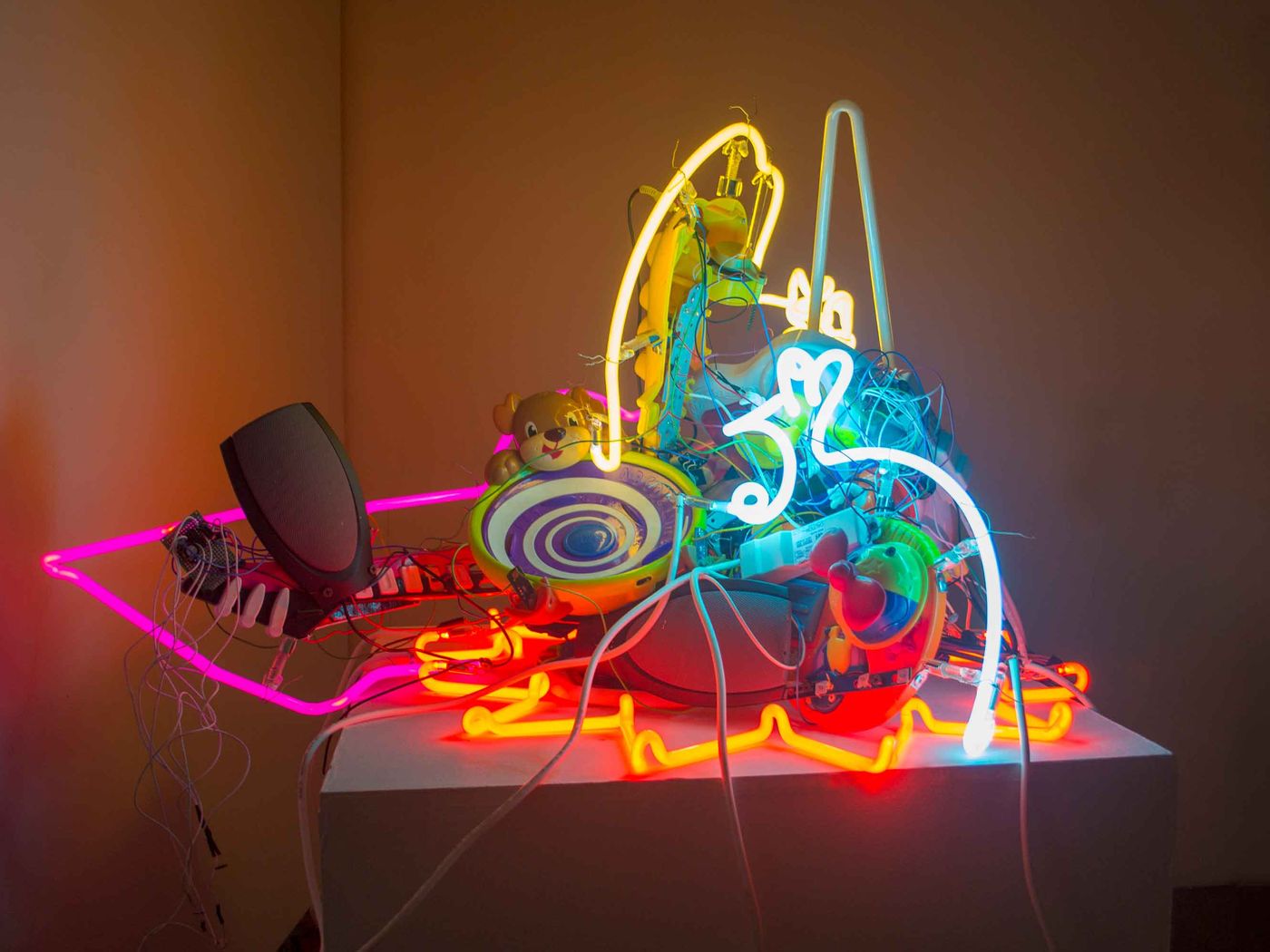 In "New Glass Now," at the Smithsonian American Art Museum's Renwick Gallery, works by 50 artists, including the hot-sculpted glass work of James Akers, (above: TThe Wild One(B), 2018) amplify the stunning advancement of the artform since the last major survey.

Glass art has its origins in ancient Egypt and Assyria. Glassblowing arose in first century Rome. The beauty and versatility of the medium still brings new innovations centuries later, as can be seen in two new exhibitions from the Smithsonian American Art Museum (SAAM).

“New Glass Now” at SAAM’s Renwick Gallery, organized by the Corning Museum of Glass in Corning, New York, celebrates the creativity of contemporary glass artists worldwide. A survey at the museum’s main building, meanwhile, “Sargent, Whistler and Venetian Glass: American Artists and the Magic of Murano,” explores the revival of the Venetian glass movement of the late 19th century and how it, in turn, influenced collecting, art and tourism.

While there are connections between both, there is history at the Renwick, which was the site of an earlier landmark contemporary glass exhibition, the 1980 “New Glass: A Worldwide Survey,” also organized by the Corning Museum. Some of the now-famous artists in the Renwick’s permanent collections, including Paula Bartron, Dominick Labino, Karla Trinkley and Dale Chihuly, whose 8-foot Seafoam and Amber Tilled Chandelier hangs in the gallery’s Octagon Room, are showcased in the display, "New Glass Then."

“New Glass Now” features the works of 50 artists, originating from more than 23 countries, and highlights previously underrepresented communities in the glass world, amplifying how advanced the artform has become in the 35 years since the last such survey.

The gallery literally buzzes with the electricity that surges in the neon of Megan Stelljes’ This Shit is Bananas with its hanging hot-sculpted fruits, and Doris Darling’s barbell-snapped “Super Strong” Lamp, as well as the child’s toy mélange of James Akers’ The Wild One (B).

The show also stuns with control and beauty. Jeff Goodman’s cool curved kiln-cast borosilicate glass of an exterior tile is one of thousands used in the architecture of a magnificent Bahá’í temple in South America; and David Derksen’s carafes and laboratory beakers are precision crafted and highly functional. Deborah Czeresko gets a whole room for her own eight-foot chandelier, one meant to look like hanging choice cuts from the butcher shop, Meat Chandelier.

Ceresko, who is a bit of a rock star in the glass world as first season winner of the Netflix glass competition “Blown Away,” brings scale and a sense of humor in her still quite intricate work. She has been working on a series that blends notions of high and low art, usually with a food theme that has included a liquor set that replaces the dragon design common to many Venetian revival pieces with an idealized worm from a tequila bottle.

She’s also working on a glass reproduction of a turkey and a chicken. But her Meat Chandelier, with its hanging links of sausage, has a more serious intent—dismantling the “toxic masculinity” and sexism found amid the smoke, fire and steel tools of the typical glassblowing “hot shop”—a dramatic setting that once attracted 19th-century Venetian audiences to the macho workplace.

“I thought: What would I make if I was a female maestro back in the day in Venice?” Czeresko mused during a Smithsonian-sponsored artists’ talk in early November. “I wanted to make a commentary about the hot shop. I also wanted to make light and make food in glass. I combined the two as an iconic vision.”

“It’s just really about empowerment,” she says, “an alternative approach of being and changing the paradigm of being in the hot shop.”

That atmosphere is also called out in the posters on display from Suzanne Peck and Karen Donnellan, Blow Harder: Alternative Lexicons for the Hotshop, in which sexually-charged terms and phrases commonly used in the studio receive a charming refresh—Jacks become Jills; strip off is replaced by Chippendale, blow partner becomes companion in fire.

While the technical mastery of many pieces is awe-inspiring, other pieces are effective for their simplicity. Tamás Ábel’s Colour Therapy is a commercial glass mirror affixed with rainbow-colored tape from which he can easily and quite innocently project the reflections of the Pride flag on well-known white edifices from the Millennium Monument in Budapest to the Washington Monument in Washington, D.C. The performance is captured in a two-minute video in the exhibition.

Viewers tend to line up to see the effects of Bohyun Yoon’s Family II, an elegant glass vase on a rotating base that makes silhouette portraits of his family—artist, wife, child and back again.

While some pieces show mastery of the form with finesse, others comment on the medium’s ever fragile state. Indeed, a warning accompanying the five vessels inflected with rocks, brick and window glass, in Maria Bang Espersen’s Things Change cautions that they may “naturally break while on display.” The show’s catalog calls the work an “achingly beautiful reading on mortality and impermanence.”

As it happens, several of the pieces in “New Glass Now” come from studios in Murano, the island in the Venetian lagoon that is the focus of the Smithsonian American Art Museum show. One, by Austrian Erwin Wurm, titled Mutter, is a wry injection-cast glass depiction of a hot water bottle wearing lace-up shoes. Another, Bonded by Monica Bonvicini, in hot worked glass with metal buckles, looks like a tangle of men’s trouser belts.

C. Matthew Szõsz’s Reservoir uses the same kind of delicate roped glass fiber that is also seen in the lattice work of a 19th-century boat-shaped vessel—based on a design by the only documented female glassblower of the Renaissance age in Murano, patterned in 1521.

The fancy vases and goblets that revived the glassblowing in 19th-century Murano on view in “Sargent, Whistler and Venetian Glass” have some echo in the contemporary show, but their forms and colors may seem necessarily fusty by comparison. At the time, though, the delicate, colorful and intricate works became quite popular and collectable, and their emergence in U.S. parlors meant they were reflected in the paintings of those days as well. Crawford Alexander Mann II, the museum’s curator of prints and drawings who organized the show, says the exhibition “reveals the impact of Italian glass on American art, literature, design theory and science education, as well as ideas at the time about gender, labor and class relations.”

“A lot of these vessels were used to decorate homes and they would show up in these paintings, to signify taste and elegance and as a way to tell a story about a person,” adds Mary Savig, curator of craft at the Renwick.

The celebrated American painter John Singer Sergeant was born in Italy and returned to the country throughout his lifetime, stopping in Murano where he was fascinated by behind-the-scenes of the glass production, and the women who’d carry long strands of glass before they were cut into beds, the sprays of the tubes attracting and reflecting their own light.

This is seen in the striking life-size 1882 oil portrait A Venetian Woman that has become the main image of the show. In it, a model pauses while holding a bundle of blue glass canes soon to be cut and polished into colorful glass beads, a major international island export at the time. Five Sargent paintings are in the exhibition, though his famed 1903 portrait of Theodore Roosevelt that hangs in the White House is the source of one of two striking glass mosaic works of American Presidents (the other is of Lincoln).

Better represented in the exhibition is James McNeill Whistler, who on more than one occasion was commissioned to visit Venice to make etchings, and (to the woe of his patrons) was attracted more to the edges of town and down seedy alleys than he was the grand canals that were the basis of so much tourism art. Ten of his etchings are part of the show.

Other artists include Robert Frederick Blum (whose Venetian Lacemakers highlighted another craft with which the region became known), William Merritt Chase, Louise Cox, Thomas Moran, Maxfield Parrish and Maurice Prendergast—the painter who dabbled for a time in making images out of glass and ceramic tiles.

Two linoleum block prints by Mabel Pugh, recently acquired by the museum, help bring attention to women artists often sidelined in the history of the period.

“Venice’s famed glass industry has long contributed to its historical richness and to its reputation for cutting-edge contemporary art, together with the Venice Biennale art fair,” says Mann. “To this day Americans are dazzled by this face-off between past and present…following the footsteps of Sargent and Whistler to enjoy its beauty and creative energy.”

“New Glass Now” continues at the Renwick Gallery of the Smithsonian American Art Museum through March 6, 2022.

“Sargent, Whistler and Venetian Glass: American Artists and the Magic of Murano” continues at the Smithsonian American Art Museum in Washington, D.C., through May 8, 2022.