Twelve Must-Sees at the Udvar-Hazy Center 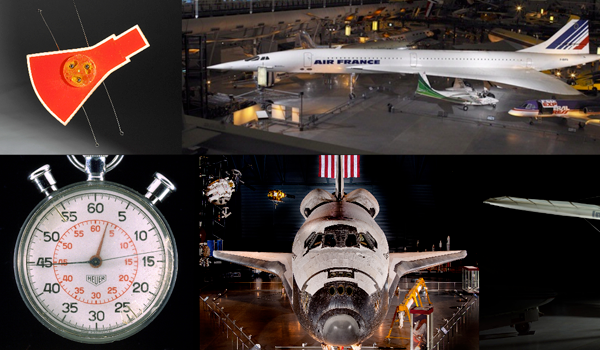 The Smithsonian Institution has announced that the Steven F. Udvar-Hazy Center will reopen May 5 following months of closure as a public health precaution due to COVID-19. Visitors must comply with health and safety precautions, including timed-entry passes, hand-sanitizing stations, mask requirements for ages two and up, and limited numbers of visitors. But the massive Udvar-Hazy indoor complex, located in Chantilly, Virginia, near Dulles International Airport, should have no problem offering plenty of space for maintaining social distancing. The 17-acre aviation and aerospace museum, which opened in 2003 as an adjunct to the popular National Air and Space Museum in Washington, D.C. houses in its huge hangars thousands of notable artifacts that could never have fit inside the much smaller museum on the National Mall.

Together, the Udvar-Hazy, along with the museum on the National Mall (currently undergoing a massive renovation) showcase the largest collection of space and aviation artifacts on Earth. Of the 6 million visitors to both last year, 1.3 million of them came out to the Virginia site.

When Hazy's doors reopen, visitors will encounter two new artifacts—the Freedom 7 capsule, marking the 60th anniversary of the first American in space, and the Blue Angels F/A 18-C. Also, some artifacts at the south end of the facility’s Boeing Aviation Hangar are draped in plastic sheeting due to a two-year roof repair project currently under way. And public tours, rides and exhibition interactives won't be available or operable. But there are still more than enough remarkable artifacts to warrant attention—not the least of which are the SR-71 and the still-controversial Enola Gay, which recently marked the 75th anniversary of its fateful mission to drop the first atomic bomb on Hiroshima, Japan.

With fewer visitors, this will be a time for a more intimate opportunity to check out some of the museum's singular and memorable items. They include the kind of colossal things that you can’t quite avoid seeing and would never expect to see indoors, from the elegant curves of the supersonic Concorde to the battered exterior of the Space Shuttle Discovery. As well as thousands of smaller, sometimes personal items crucial to key moments in space flight, from a Mission Control pocket stopwatch to a map marker from the Mercury Project. And even more surprisingly, is the carcass of one of the smallest involuntary space fliers—a spider from a Skylab experiment suggested by a high school student.

Here we present a dozen of our picks not to be missed.

Millions may have just tasted their first quarantine due to the coronavirus pandemic, but astronauts returning from the moon had to shelter in place as well, lest they spread any unknown lunar germs. Equipped with elaborate air ventilation and filtration systems, the Mobile Quarantine Facility was used by Apollo 11 astronauts Neil Armstrong, Buzz Aldrin and Michael Collins after their historic trip to the moon in July 1969. The retrofitted Airstream trailer with living and sleeping quarters and a kitchen was sealed but in motion for their first 88 hours back. First aboard the aircraft carrier USS Hornet, it was transferred to the Pearl Harbor Naval base in Hawaii and eventually the cargo hold of a C-141 aircraft taking the trio to Houston, where a more spacious quarantine facility awaited them at the Johnson Space Center. Crews from Apollo 12 and Apollo 14 also quarantined but by July 1971, following the Apollo 15 lunar landing mission, the practice had been abandoned.

It’s fitting that one of the earliest A-Series rockets from Robert H. Goddard is in the Smithsonian. It was the Smithsonian Institution that funded the man who would become known as the father of rocketry, leading to his declaration in 1920 that a liquid fueled rocket could reach the moon, a notion much ridiculed at the time. In 1935, Goddard tried to demonstrate the possibilities of such a rocket in Roswell, N.M. to a pair of big-name supporters, Charles Lindberg and Harry Guggenheim. A technical glitch prevented its launch that day but Lindbergh made sure the 15-foot rocket would be donated to the Smithsonian. It became the first liquid-fuel rocket in the collection.

Early rocketry could be surprisingly primitive, as seen in the jerry-rigged two-foot wooden sled Robert F. Goddard devised in the early 1920s to convey flasks of super-cold liquid oxygen that were much too chilly to touch. Goddard had first started experimenting with solid propellant rockets in 1915, switching to more powerful liquid propellants in 1921. The rudimentary sled, of pine, nails and twine, providing high contrast to the steely sleekness of the all the other objects in the Udvar-Hazy Center, was donated to the Smithsonian in 1959 by the scientist’s widow, Esther C. Goddard.

One of the smallest items at the Udvar-Hazy Center is the carcass of a Cross spider named Anita, who, with a companion named Arabella, became involuntary space travelers on the Skylab 3 mission in 1973. They were there as part of an experiment to test how weightlessness affected their web building. The idea came from a 17-year-old student from Lexington, Massachusetts, Judith Miles, who responded to a NASA initiative for student experiment ideas. It turns out the arachnid astronauts spun webs in space using a finer thread in response to the weightless environment. Neither Anita nor Arabella survived the nearly two months in space. But they were placed in glass bottles with their names on them. (Arabella is on loan to the U.S. Space and Rocket Center in Huntsville, Alabama.)

As the lunar module of Apollo 11 was fast approaching its historic target on July 20, 1969, it was also running low on propellant. Neil Armstrong approached Tranquility Base searching for a clear patch to land, as Charles Duke at Mission Control in Houston barked out the minutes remaining before the fuel ran out—“60 seconds, 30 Seconds,” he said in those tense final minutes. Duke based his count on a handheld Swiss-made Heuer stopwatch. When Armstrong announced “The Eagle has landed.” Mission control responded: “We copy you on the ground. You got a bunch of guys about to turn blue. We’re breathing again. Thanks.” The item was donated to the museum by the NASA in 1978.

The alien mother ship that spectacularly lands at Devil’s Mountain at the end of the 1977 film Close Encounters of the Third Kind was lit like the kind of disco ball you’d expect from a ship equipped with such a massive sound (and, as it turned out, communication) system. Without lights it looks more like a death star — a much smaller one. But the model, 63 inches round and 38 inches wide, is a surprising find in the Udvar-Hazy Center. Conceived by Steven Spielberg but made by a team led by Gregory Jein, it was built using parts from model trains and other kits. But its makers had a little fun with the parts of it that weren’t seen on camera, such that it’s affixed with the model of a Volkswagen bus, a submarine, World War II planes, and R2-D2 from “Star Wars” — one of the modelers had just come from that production. There’s also a mailbox in there and a cemetery plot.

There are not many items in the massive space and aviation collection that are as simply drawn and so brightly painted. But the six-inch, red plastic device had an important job: Showing where the capsules of the Mercury Project were at any time of their flights. It was moved across a world map indicating international tracking stations by a pair of wires. The crude map dominated the wall at Mission Control on Cape Canaveral, Florida, for all six of the manned flights from the Mercury program from 1961 to 1963. The actual Mercury capsules themselves, that gave flight to Alan Shepard, John Glenn, Gus Grissom, Gordon Cooper, Wally Schirra and Scott Carpenter, were uniformly gun barrel gray with a touch of Army green. But definitely not pink.

The impossibly cute Aurogiro may look like a character from Pixar’s Cars sequel Planes, but the idea was to build an “aerial Model T” that could take off from driveways and fly around, or, with the above rotor wings folded back, drive leisurely down the street at 25 mph. Test pilot James G. Ray did just that when he landed it in a downtown Washington D.C. park in 1936, folded back the wings and drove down Pennsylvania Avenue to the Commerce Department which commissioned the project. The precursor to the helicopter performed well, but with an estimated cost of $12,500, it was too expensive for the average suburbanite for whom it was intended. Only one was built.

Sometimes space explorers come from other walks of life. Take 34-year-old New Jersey truck driver and skydiving enthusiast Nick Piantanida, a skydiver who wanted to set a new record for highest jump, in his case from a balloon. His first attempt in 1965 was the victim of a wind shear; he landed in a city dump in St. Paul, MN. His second attempt in February 1966 set a world altitude record of 123,500 feet, but a mishap with an onboard oxygen supply forced controllers to cut the gondola loose. For Strato-Jump III, three months later, Piantanida reached 57,600 feet when disaster struck and the gondola had to be cut loose again. He may have accidentally depressurized his helmet; he never gained consciousness and died four months later in August 1966 at 34.

This French-made two-seat ultralight from 1992 lived up to its name — it only weighed about 360 pounds empty but with its 34-foot aluminum tube and sailcloth wingspan this model was used by the conservationist group Operation Migration to help guide endangered flocks of Whooping cranes and other bird species to new migratory routes from Canada to the American South. Flying about 31 mph, it also broadcast crane calls during the flights. It was also featured in the 1996 family film Fly Away Home with Jeff Daniels and Anna Paquin.

Discovery was the third Space Shuttle orbiter in space, and racked up the most miles in its 27 years, traveling almost 150 million miles from its 39 Earth-orbital missions from 1984 to 2011. It carried 184 crew members (including John Glenn who returned to space at 77 in 1998). Among its many missions was launching the Hubble Space Telescope—and a couple of its repair missions. Discovery represented the “Return to Flight” in missions following the loss of the Challenger in 1986 and Columbia disaster in 2003. In all, it clocked 365 days in space—more than any other orbiters. When it finally retired, it was flown to Virginia in April 2012 after first taking a victory lap over the Nation’s Capital. It was the first operational shuttle to be retired, followed by the Endeavour and the Atlantis a few months later.

The biggest thing by far in the Udvar-Hazy Center — and maybe in all of the Smithsonian museums — is the 202-foot-long Concorde from Air France. In its day, the supersonic airliner cut in half travel time across the Atlantic Ocean, but ultimately couldn’t maintain its first-class service because of high operating costs. A sleek, international creation by Aérospatiale of France and the British Aviation Corporation, Concorde flew at a maximum causing altitude speed of 1,354—more than twice the speed of sound. Air France agreed to donate a Concorde to the Smithsonian in 1989 and lived up to the bargain in 2003, providing the Concorde F-BVFA that had been the first Concorde to open service to Rio de Janeiro, New York and Washington D.C.