This Quirky Contraption Lifted 19th-Century Pilots Into the Air for a Short, Exhilarating Glide

The rare Lilienthal glider, one of only a few originals known to exist, is newly conserved and ready for its public debut 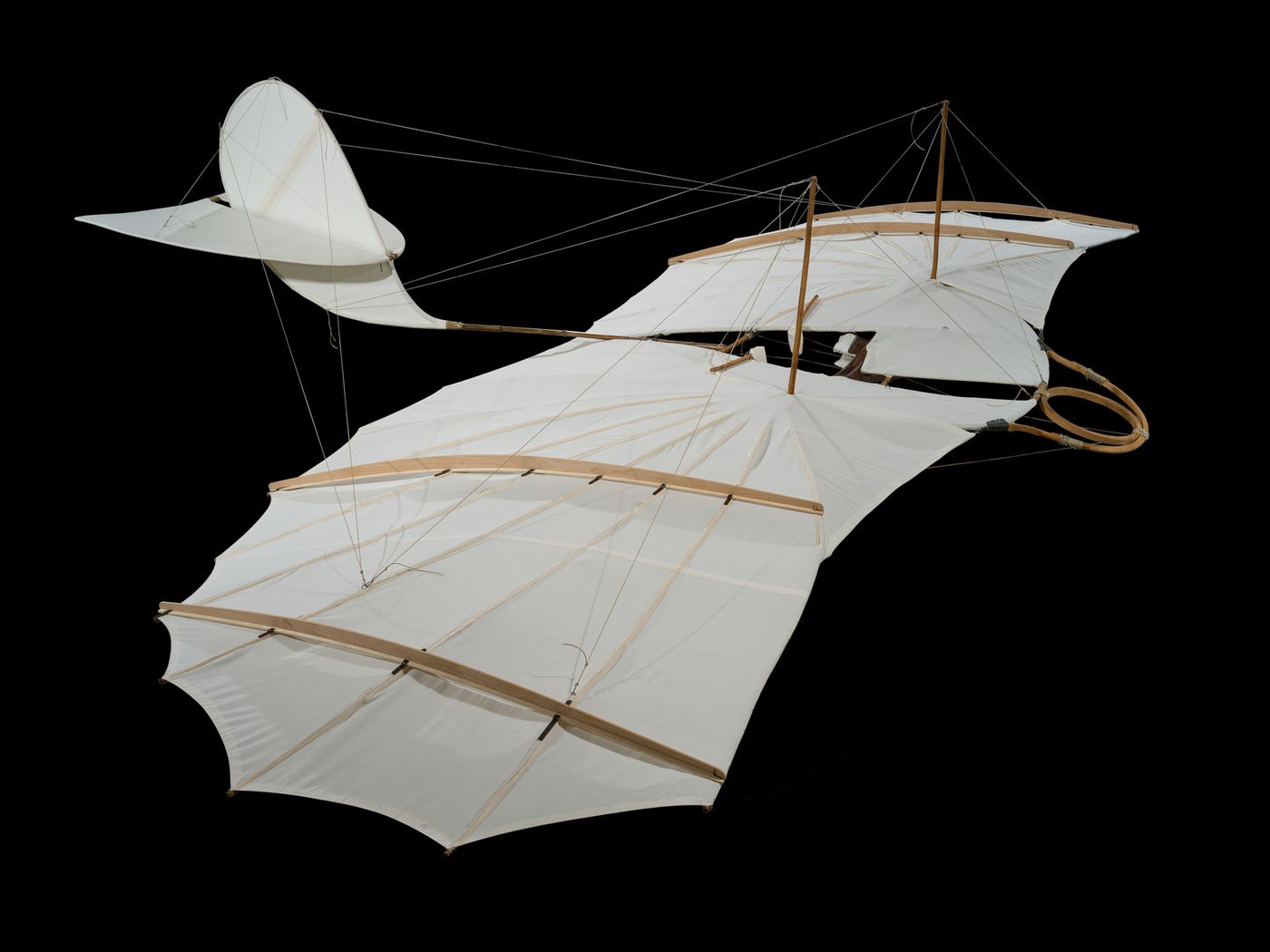 This fall, visitors to the Smithsonian’s National Air and Space Museum in Washington, D.C., can see the glider and other treasures, when the “Early Flight” exhibition opens in the museum's newly transformed west wing. NASM

In April of 1896, to drum up enthusiasm for human flight and boost circulation of his newspaper, William Randolph Hearst, the New York Journal publishing mogul, bought a glider made by the famed German aviation pioneer Otto Lilienthal.

Hearst—the only American known to own a Lilienthal glider—sponsored test flights of the birdlike vehicle, a primitive predecessor of the airplane, at a few East Coast locations, including a Staten Island estate. To pilot the glider, Hearst invited the New Jersey athlete Harry Bodine, who made most of the flights, and artist William Francis “Frank” Ver Beck, known for the comedic animal drawings he created for popular magazines.

To fly a Lilienthal glider, a pilot would grab hold of a handle bar attached to the wings and take off from the top of a hill, soaring for a short distance with feet dangling. Pilots would shift their body weight to steer the craft—a technique still used to fly hang gliders of today. In a smooth flight, the Lilienthal glider would soar for a few hundred feet and then settle to the ground. “The spectacle of a man supported on huge white wings, moving high above you at race horse speed, combined with the weird hum of the wind through the cords of the machine, produces an impression never to be forgotten,” reported one enthusiastic eyewitness of the time.

Bodine, piloting Hearst’s glider, soared for as many as 375 feet at altitudes up to 50 feet high. But unfortunately, Ver Beck’s virgin flight didn’t go well. “He came down, not very slowly or yet very gracefully,” the Journal reported on May 3, 1896. Ver Beck was not injured, but a few wooden ribs on the glider’s right wing splintered.

Hearst’s Lilienthal glider was deemed unsafe and put into storage. Cosmopolitan magazine editor John Brisben Walker purchased it and displayed the Lilienthal glider at the first event of the Aero Club of America; then, in 1906, the Smithsonian Institution acquired the glider after the inventor and Smithsonian regent Alexander Graham Bell approached a museum official about accepting it as a donation from Walker.

This fall, visitors to the Smithsonian’s National Air and Space Museum can see the recently conserved hanging glider with a mannequin pilot and other treasures, when the “Early Flight” exhibition opens with the museum's newly renovated west wing. The Air and Space Museum has been undergoing a major seven-year renovation to improve its aging building systems.

Christopher Moore, a curator in the aeronautics department, calls the Lilienthal glider—no more than five are known to exist in the world—the museum’s most important flying artifact pre-dating the Wright Brothers’ inaugural flight in 1903.

“The Lilienthal glider is one of the first things you will see as you come in,” Moore says of the eye-catching display. “It kind of jumps out at you. It’s something primitive, but there’s a man flying it. It’s right in front of you.”

Orville and Wilbur Wright, who achieved the first human-controlled sustained flight in a powered, heavier-than-air aircraft, kept a close eye on Lilienthal’s groundbreaking work across the Atlantic in Germany. To master flight in their own aviation work, the Wrights studied Lilienthal’s efforts. “Of all the men who attacked the flying problem in the 19th century,” wrote Wilbur Wright in 1912, “Otto Lilienthal was easily the most important. He was without question the greatest of the precursors, and the world owes to him a great debt.”

Born on May 23, 1848, Lilienthal was called “The Flying Man.” And today Lilienthal is known as the first successful aviator in the history of mankind. His glider, the Normal-Segelapparat, or normal sailing apparatus, is similar to hang gliders flown today, Moore says.

Lilienthal was a trained engineer, who had garnered considerable respect, Moore says. “He was seen as the guy who would solve a problem,” he says. “He was very influential; he would lecture to scientific groups. The public just thought it was a cool thing that this guy was making these flights.”

“The Flying Man” founded the science of wing aerodynamics by studying the flight of birds—and indeed, the glider has an avian-like appearance. Along with his brother, Gustav, Lilienthal wrote a book called Birdflight as the Basis of Aviation: A Contribution Towards a System of Aviation. Feathered creatures and the way they moved their bodies with their wings held the key for machines that have made human flight possible. He once tried unsuccessfully to craft a flying device that flapped its wings. “They analyzed how birds flew and tried to translate that into human flight,” Moore says. “Unfortunately, humans aren’t built like birds so they can’t fly like them either.”

Lilienthal, whose aviation work began in 1891, built ten of his “Normal” gliders; the Smithsonian has the eighth. Beginning in November of 2019, the Smithsonian's Lilienthal glider underwent an 18-month modern conservation effort to restore the glider back to how it originally appeared in 1896, including its scars and dents from the crash.

“The way it looks right now, it’s about as accurate as it gets to 1896,” Collum says about the glider. “You can see evidence of the crash. What we’re really basically revealing is how it looked soon after the crash.”

To conserve the Lilienthal glider for its next 126 years, was a painstaking and delicate process that reverses some inaccuracies from previous restorative work. “Unfortunately, our glider was subjected to two very amateur restorations in the past,” Collum says. “That’s what we were doing . . . to basically unravel and dissect the previous restorations.”

According to Smithsonian records, an employee rebuilt the Lilienthal glider in 1919. But for this conservation treatment, curators determined that the horizontal stabilizer had been lost after the crash, and its 1919 copy was inaccurate and incorrectly positioned. The original vertical fin was too damaged to be reattached, so it was preserved and placed in storage.

But the broken ribs from the crash, which are part of the glider’s history and identity, says Collum, were preserved. “As a rare and special artifact, we consider events like that part of its operational history,” he says. “Just like a fighter plane that comes back… and has combat damage like bullet holes…we consider that to be sacred.” During previous restoration efforts, Collum says, “a lot of historical manufacturing details were just skimmed over.”

Smithsonian conservators worked with colleagues at the Otto Lilienthal Museum and the Deutsches Museum in Germany searching for details in the historical record. “What really differentiates this project from previous restoration work: Every time it was restored in the past, they were using … the wrong information, and not studying the artifact itself,” Collum says. “In this process, we’ve actually done the technical analysis, done the archival research, and collaborated with colleagues in Germany to bring out as many original historical details as possible.”

In some places where the wood needed support, they used glue to reinforce it. They did make a discovery. They had not realized the glider had an impact bar, so they added one after finding the original mounting hardware. And they added a new plain-weave cotton fabric, as the original was long gone. And the tail, which had been poorly fabricated in a 1967 restoration, was replaced with historically accurate components made with bamboo and willow.

Could the museum's Lilienthal glider still fly? Theoretically, yes, Collum says. Not that anyone should try it: The willow wood has weakened after more than a century, so the glider isn’t likely to be sturdy enough. (Engineer Markus Raffel of the German aerospace agency DLR recently crafted a reproduction of a Lilienthal glider that successfully took flight.)

Back in the 1890s, Lilienthal and other brave people who tried to fly the glider didn’t know how sturdy and safe it would be either. But their pioneering spirit created the crude and primitive version of what led to modern flight, airplanes and airports; and Lilienthal happily accepted the risk. “To invent an airplane is nothing,” Lilienthal said. “To build one is something. But to fly is everything.”

Three months after Hearst’s glider was wrecked, Lilienthal himself crashed one of his gliders near Berlin, Germany, and died August 10, 1896, at the age of 48. His last words, according to his sister-in-law, were: “Sacrifices must be made.”

The Lilienthal glider will go on view in the new exhibition “Early Flight,” which opens to the public in the fall of 2022 along with “America by Air,” “The Wright Brothers & the Invention of the Aerial Age,” “Nation of Speed,” “Thomas W. Haas We All Fly,” “One World Connected,” “Kenneth C. Griffin Exploring the Planets Gallery,” “Destination Moon,” and the museum store and Albert Einstein Planetarium.

Kellie B. Gormly is an award-winning veteran journalist who freelances for national publications including The Washington Post, German Life, and Catster. She is a former staff writer for the Pittsburgh Tribune-Review, The Associated Press and the Fort Worth Star-Telegram.