The black, tarry expanses, licks of flames and dense clouds of smoke so dominate The Disaster Paintings of Donald Sultan you almost expect to hear the crackle of fire and the scream of sirens to accompany them, or at least a whiff of the acrid smell they’d produce.

A dozen of the intense works from 1984 to 1990 that comprise a new show at the Smithsonian American Art Museum in Washington, D.C., have an added impact since each of the paintings is so large—uniformly 8-by-8 feet; one from the collection of the Modern Art Museum of Fort Worth, which organized the show, stretches an expansive 12-feet wide.

Donald Sultan: The Disaster Paintings, which previously also showed in Miami and will be off to Raleigh at the end of the summer and to Lincoln, Nebraska, early next year, has one extra painting in the D.C. stint—Plant May 29 1985, on loan from the Smithsonian’s Hirshhorn Museum and Sculpture Garden.

Together, the bleak industrial landscapes and forest fires denote an unsettling world not only on the brink, but burning all around us. In just two are fireman visible in shadows responding to the fires. There are the industrial, home or church fires, which like the other paintings are named after the date of the event—or when newspaper photographs were published of them. Sultan includes natural blazes such as Forest Fire Jan 4 1984 to Yellowstone Aug 15 1990. Industrial materials, such as blocks of linoleum, give the paintings their uniformity, mixed with the artists’ gouges into the surfaces and the spread of tar and latex.

A couple just show the bleakness of everyday toxin-belching industrial plants, be they living, as in the Hirshhorn contribution, or “dead” as in the sprawling work from Forth Worth.

One drawing is particularly grim, depicting a factory that had been infamously devised to burn humans, Polish Landscape II Jan 5 1990 (Auschwitz).

Unlike the more optimistic subject matter to which Sultan later turned, depicting flowers and fruit, The Disaster Paintings worldview drips, like the watered-down Latex that is its final strokes, with unending pessimism.

“The series speaks to the impermanence of all things,” the artist says in a statement. “The largest cities, the biggest structures, the most powerful empires—everything dies. Man is inherently self-destructive, and whatever is built will eventually be destroyed …. That’s what the works talk about: life and death.”

Born in Asheville, North Carolina in 1951, Sultan’s father ran a tire retreading shop, which gave the artist his first acquaintance with tarry material. Working on constructing lofts when he was first an artist in New York City in the mid-1970s gave him familiarity with other industrial materials he’d adapt into his work. 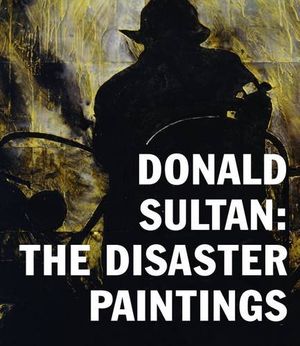 A survey of Donald Sultan’s monumental landscape series. Working at the intersection of abstraction and realism, Donald Sultan has created a unique painting technique that defies categorization.

If it’s difficult at times to decipher what exactly is happening in his chaotic scenes, that’s intentional, Sultan says in an interview in the accompanying catalog. “I wanted the works,” he wrote, “to mirror how in an actual event it’s hard to fully grasp what’s happening.”

It was like that, he said, on 9/11. “I was with others, standing nearby, when the planes went into the World Trade Center,” Sultan says. “We stood around looking, trying to figure out what was going on.”

Sometimes, the banal blue-flecked linoleum patterns peek through in the works, providing the sky tones, for example, in Venice Without Water June 12 1980.

And as for the use of tar, Sultan says there is a precedence for that in art history. “The sixteenth-, seventeenth-, and eighteenth century painters made use of tar for their blacks, especially for Dutch or Flemish florals, still lifes and French historical paintings. It was called bitumen, and its use was very common,” he wrote.

Its use here was to depict, he says “the passing of one way of life to another and the confrontation between stability and chaos that ensues when that happens—when you’re in a situation or things are housed in industrial architecture, where everything is seemingly indomitable but can quickly turn into chaos or be exposed as not what they seem. A building isn’t as fortified as we think it is.”

After making dozens of them, Sultan says he stopped making the Disaster Paintings in the 1990s because “the events of the day had actually caught up with me,” he says. “Now every day there’s a new catastrophe. So they don’t need me. I’ve got nothing to say about that.

Sarah Newman, the curator of contemporary art at the Smithsonian American Art Museum, who organized the show here, puts it more simply. Like the embers in the paintings, she says, “he burnt out on them.”