Why are we Around the Mall bloggers so excited about the upcoming Dreamworks 20th Century Fox film, Night at the Museum: Battle for the Smithsonian, set to be released next May? It’s all about ego. Here we have an opportunity to sit in a darkened theater and nitpick over all the inaccuracies.

So, let’s kick things off a little early by looking at some publicity photos, shall we?

First up, Ben Stiller (above) striking a dramatic pose in—um, what museum is this again? Is that The Thinker? We have lots of lovely Rodin pieces, but this isn't one of them. (You can, however, see a miniature version of this figure in Rodin’s architectural study for The Gates of Hell at the Hirshhorn.) The National Gallery of Art has a casting of The Thinker, but theirs is a little guy—only a couple feet tall, and that museum, to be really picky, isn't a Smithsonian museum. Oh, and that big gold ball thing in the background on the left is Jack by Paul Feeley. It is owned by the Smithsonian American Art Museum and currently displayed on the 3rd floor.

Next up: Amy Adams as Amelia Earhart. 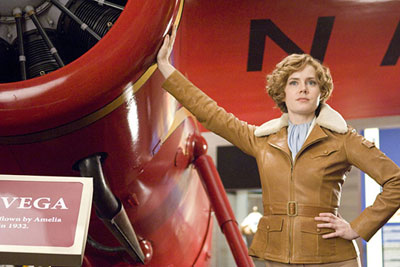 Adams is looking pretty darn cute here—but there’s something about that ‘do that doesn’t set well with me. It is physically impossible for bubble curls to survive the stress of a flying cap. If Adams is too good for "hat hair," I can't believe in the character. It’s a vision of Amelia by way of Barbie. (Hillary Swank dons a more realistic, rugged look in the upcoming biopic of the 20th-century aviatrix.) Meanwhile, the facsimile of Earhart’s Lockheed Vega, which you can find in the Air and Space Museum's Pioneers of Flight gallery, looks spot-on. 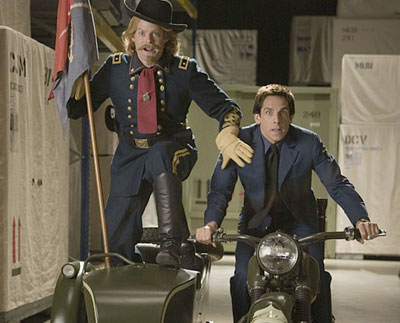 And then there’s Custer. He’s looking pretty good here, like he leaped out one of the Matthew Brady photograph in the National Portrait Gallery collections. I’m just wondering if his white buckskin coat, owned by the Museum of American History, is going to make an appearance.

There also seems to be a really Egypt-heavy story arc woven into the film. There is a very nice ancient Egyptian art collection at the Freer Gallery of Art.

There is also a sarcophagus—it houses the not-mummified remains of founder James Smithson and can be seen at the Smithsonian Castle.

But the Smithsonian does not have anything pertaining to a pharaoh by the name of the Kamunrah, the movie’s villain, mainly because the character is pure fabrication.

Hmm, for someone who enjoys movies as much as I do, you'd think I'd be able to suspend my disbelief a little better.

All well-intended nitpicking aside, we really are excited about the upcoming film and we plan on providing more coverage. What Smithsonian artifacts do you hope to see in the movie?