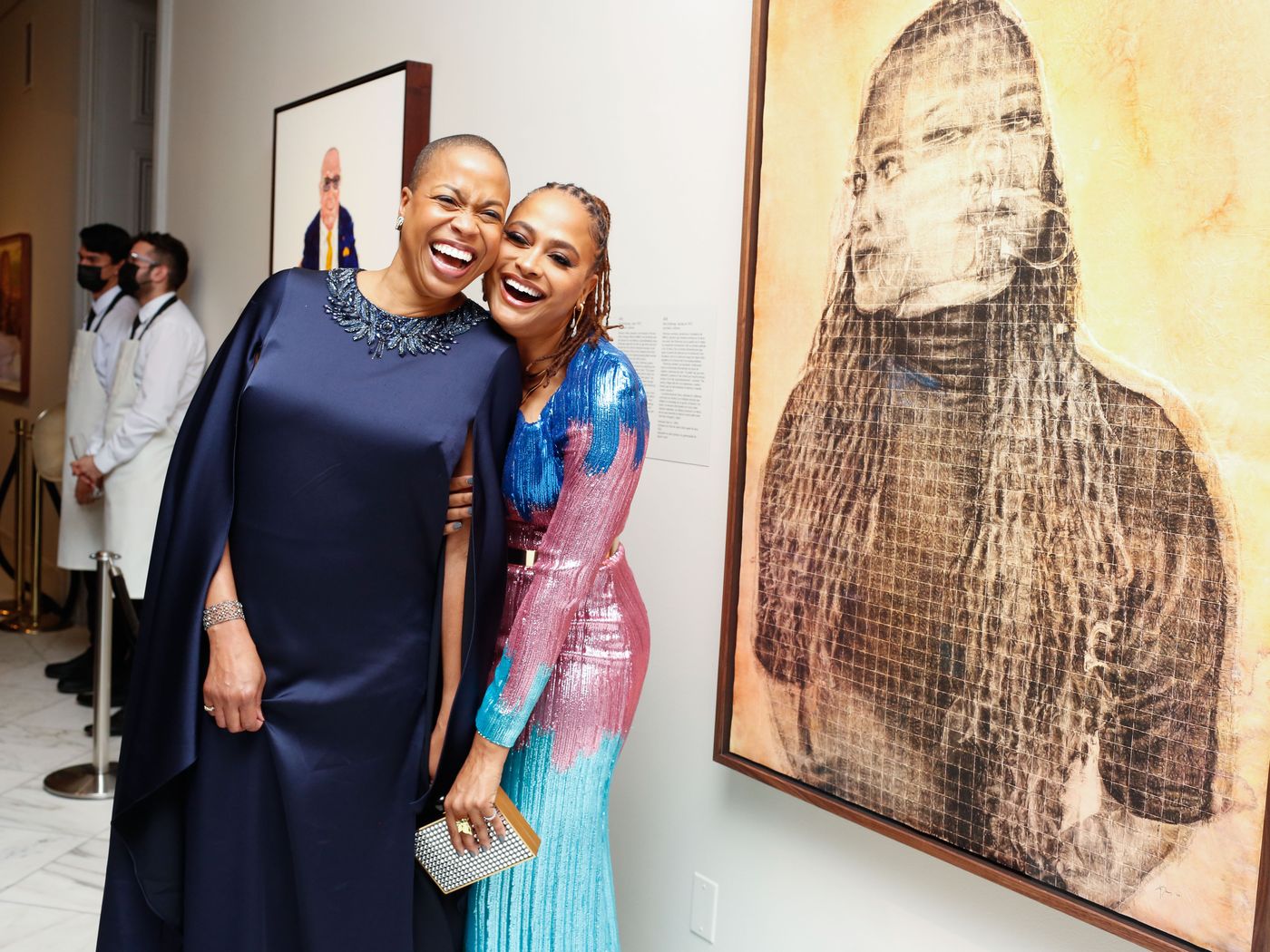 When Ava DuVernay looks at multimedia artist Kenturah Davis’ portrait of her, she’s reminded of her father. His thoughtful words of wisdom—including the phrase “God’s grace is always granted”—are hidden on its surface. Made with rubber stamps spelling out this secret message, the artwork, titled AVA, also alludes to DuVernay’s many achievements in the entertainment industry, depicting the acclaimed filmmaker in motion as if she were a character in the very movies and television shows she creates.

To DuVernay, the “best art” contains layers of meaning. “The artist puts all of themself into it, layers and layers … [in the] hope that the observer feels something,” she says. “When I look at [Davis’ portrait], I feel something, and I hope others do, too. I was startled by her rendering in the most beautiful way.”

DuVernay, the Academy Award-nominated director behind Selma and “When They See Us,” was one of seven individuals honored at the Portrait of a Nation Gala on November 12. A biennial event hosted by the Smithsonian’s National Portrait Gallery, the gala and accompanying exhibition recognize trailblazers who have “made an exemplary impact” on the nation, shaping “the way that we operate and function [as a] society,” says Rhea Combs, the museum’s director of curatorial affairs. The award recipients’ likenesses are now on view in the exhibition “Portrait of a Nation: 2022 Honorees.”

“The Portrait of a Nation Award is an expression of gratitude for the leaders in our country who have made a difference and continue to advocate for a better future,” says Kim Sajet, the museum’s director, in a statement. “These honorees are innovators in their respective disciplines and advocates for social causes who use their voices to care for and lift up others. The Portrait of a Nation Award reminds us that history is living and the choices people make have an impact on the nation’s legacy.”

This year’s gala, which was delayed by a year due to the Covid-19 pandemic, brought more than 750 luminaries to the nation’s capital, where they walked the red carpet, enjoyed a performance by jazz musician Wynton Marsalis and viewed portraits of the honorees. In a break from previous years, all but one of the portraits (a 2013 photograph of Edelman by artist Ruvén Afanador) were newly commissioned, enabling the museum to expand “our relationships and connections with contemporary artists,” according to Combs. Previously, the gallery drew on a combination of commissioned works, acquired portraits and art from its existing collections.

The seven portraits run the gamut from traditional paintings and photographs to more unconventional works, like Hugo Crosthwaite’s stop-motion animation drawing of Fauci, the infectious disease expert who became the de facto face of the nation’s pandemic response. The artist traced Fauci’s five-decade career in public health across 19 drawings, 7 of which are on view in the exhibition alongside the final video product.

“In a moment where truth was being denied and alternative facts were coming up, [Fauci] became this personification of science, of real fact, of truth,” Crosthwaite tells KPBS. “So then immediately I knew that the narrative that I wanted to tell with this animation would be these two antagonistic forces. It would be science against superstition. Truth against lies.”

Another new commission, David Hockney’s portrait of Davis, is the first by the acclaimed British artist to enter the museum’s collections. Hockney rarely paints portraits on commission, instead preferring to create informal likenesses of friends and family. But Hockney counts Davis, the Grammy Award-winning music producer who has signed such artists as Bruce Springsteen, Billy Joel, Whitney Houston and Janis Joplin, as a close friend.

“I called him,” Davis recalls, “and I said, ‘David, I’m being inducted into the National Portrait Gallery. Would you consider painting me?’ He said, ‘I would not consider painting you from a photo, Clive, and I’m in Normandy, France. I’m not in [Los Angeles], and I plan to stay in Normandy.’ So I said, ‘Well, I’ll come to Normandy.’”

The finished painting—an acrylic-on-canvas portrait—conveys a clear sense of Davis’ character, capturing such quirks as his sunglasses, bright orange tie and blue sneakers. “I didn’t see [the portrait] until David had finished it,” Davis says. “He didn’t ask my opinion. I just looked at it, and I gave him my deepest, [most] profuse thank you. … He’s very happy with the work. There’s no comparable thrill.”

Of the seven portraits, Kadir Nelson’s José Andrés and the Olla de Barro That Feeds the World has arguably the most descriptive title. (Robert Pruitt’s Venus Williams, Double Portrait, which places two versions of the tennis champion in conversation with each other, is a close contender.) An oil-on-linen painting, Nelson’s work depicts the chef at the front of a crowd: the staff of World Central Kitchen, the nongovernmental organization Andrés founded in 2010 to provide meals to communities ravaged by natural disasters. He holds in his hands, like an offering, an olla de barro, or clay cooking pot.

Nelson didn’t simply “paint a painting,” says Andrés. “He told a story—the story of the people, not of the person. … It’s not about me. It’s more about the people you see in my portrait: people who show up, try to give voice to the voiceless, hope to the hopeless. In the worst moments of humanity, the best of humanity shows up.”

Reflecting on portraiture’s role in contemporary America, Combs emphasizes its “wonderful way of marrying biography [and] aesthetics.” For the museum, she adds, the Portrait of a Nation Award offers an opportunity to “not only recognize the importance of these artists but also … increase our contemporary art holdings”—a key goal for an institution perhaps best known for its collection of historic presidential portraits, all but one of which depict white men.

Serena Williams, winner of 23 Grand Slam tennis titles, echoed the importance of diverse representation when accepting her award, saying, “I think it’s so important for the National Portrait Gallery to see a Black woman smiling. Black women are often seen as serious, and we are, but we are happy as well. We are the mothers. We are wives. And we are the backbone of this country.”

DuVernay, meanwhile, says the award is “such a jaw-dropping thing to me because it’s a dream I never knew to dream. I mean, yes, you’ve heard of the [museum], but I’d never calculated that [this] would be something I could aspire to and think about for myself. … It is a call to action. It is fuel and fire for me to just keep going, [knowing] I’m doing something right.”