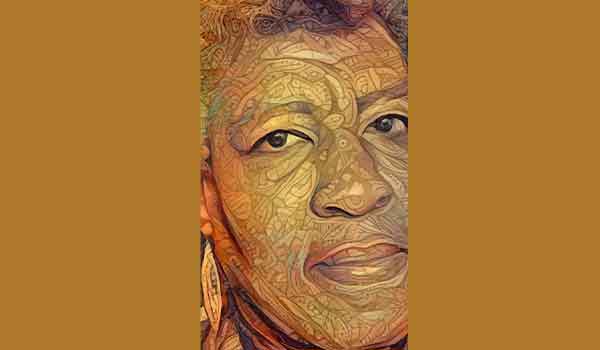 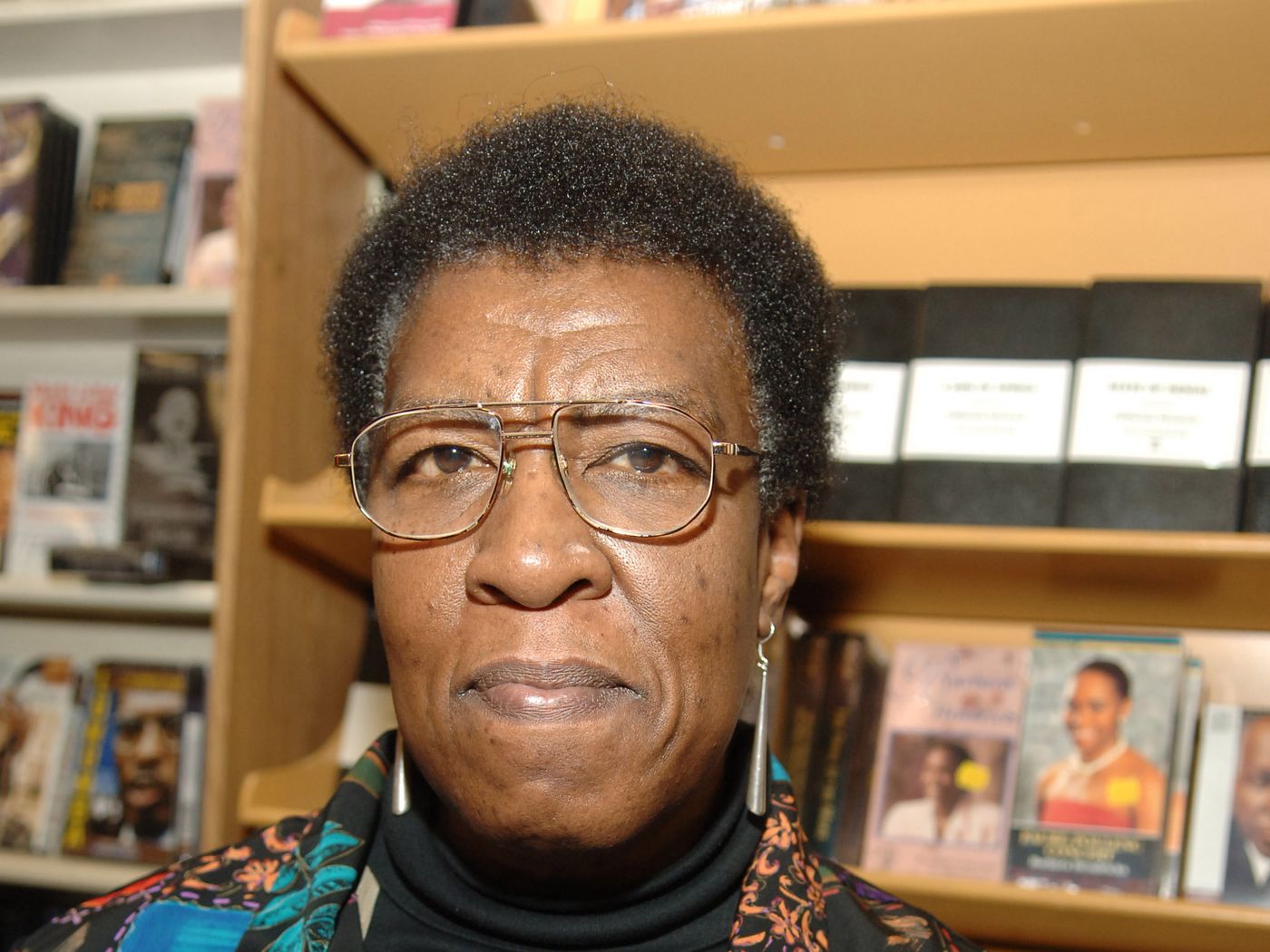 Butler is not just a talented writer, says curator Monica Montgomery. She is “this magnifying, visionary author and was and is a social justice warrior for our times.” Getty Images, Malcolm Ali, WireImage

Octavia E. Butler discovered the appeal of science fiction when she was 12. When she became successful, the award-winning author revealed that her inspiration was the unimaginative 1954 film, Devil Girl from Mars. After seeing it, the budding storyteller said she knew that she could do something better. Butler started writing at the age of 10 and begged her mother to buy her a typewriter. Since then, Butler has gathered a large contingent of loyal fans who continue to see new possibilities through her work.

Butler, who died in 2006, received two Nebula Awards, two Hugo Awards, and a lifetime achievement award in writing from the PEN America Literary Awards. In 1995 she became the first science fiction writer to win a MacArthur “Genius” Fellowship. Her 1993 book, Parable of the Sower, was a New York Times notable book when it first came out, but in 2020—27 years after its publication, her prescient tale of a world upended by global warming and failed leadership reached the Times’ best-seller list. Although her work began before the term had been introduced by critic Mark Dery in 1993, Butler has been situated in the vanguard of Afrofuturism, a phenomenon that celebrates the exploration of futures for the African diaspora. Afrofuturism has been defined as “the intersection of sci-fi and Black pride” and as “a reimagining of a future abundant with arts, science and technology as seen through a Black lens.” Works of Afrofuturism typically feature African iconography as well as elements of technoculture. Recognizing current inequality in many areas, including access to technology, Afrofuturists look beyond that imbalance to the opportunity for brighter futures.

In developing science fiction writing as her craft, after disparaging a campy sci-fi flick, Butler became a master storyteller whose unique works revealed how members of the African diaspora could use their own power to shape alternative futures. Butler is one of the futurists who will be honored in the Smithsonian’s expansive “Futures” exhibition, which will mark the Institution’s 175th anniversary and will debut in the Arts and Industries Building late this year.

“Anchoring her in the exhibition in the hall that we call ‘Futures That Unite’ is really important because her books have united people across time and space and ages and identities,” says Monica Montgomery, the exhibition team’s social justice curator. While many of Butler’s works are dystopian in nature, “We know that ultimately, her work aims to unite and go from what does the future of sorrow look like to what does the future of strength look like.”

During her career, Butler wrote 12 novels and one collection of short stories. She produced a six-book Patternist series, which focuses on mind control and traces an alien plague from the ancient past into the future; an Xenogenesis trilogy, which details human evolution after a catastrophic nuclear war; and a two-book Parable series, which tracks the formation of a teenage African American girl’s new belief system, beginning in a dystopian version of the 2020s. One stand-alone and well-known novel—Kindred—tells the story of a young Black woman who travels back and forth between the 1970s and the pre-Civil War South. Another—Fledgling—unravels the secret and horrible history of a woman with amnesia.

A Smithsonian artifact—an Olivetti typewriter—from the collections of the Anacostia Community Museum will represent Butler’s life in the “Futures” show. The museum received it directly from Butler in 2004, when it went on view in the exhibition, “All the Stories Are True,” explains Jennifer Sieck, the museum’s collections researcher. “Octavia Butler was one of the invited authors, and not only did she generously share her presence, but she also donated the typewriter to the museum, along with the ribbons.”

Butler is not just a talented writer, says Montgomery. She is “this magnifying, visionary author and was and is a social justice warrior for our times.” While the shy Butler did not fit the image of a social activist marching and carrying a sign, she still fills the role well in Montgomery’s view. “Being a social justice warrior can be about writing and envisioning and depicting new realities for social justice to be enacted and highlighting what is wrong so that we can make it right.”

“She is the author,” Montgomery says, who “introduced me to the genre of Afrofuturism—imagining the future and how it doesn’t always have to be dystopian but how it can often be one of dreaming big, envisioning new worlds, and finding social justice in the highways and byways of what’s happening in a story.”

Throughout her work, Butler demonstrated a preference for Black female protagonists, many of whom face accusations of complicity with an evil or alien force that is worsening human lives. These heroic Black women are often able to find solutions to their problems and look further to a better life ahead. Butler’s themes resonate with the “Futures” exhibition’s hopeful outlook, says consulting curator Glen Adamson. “For me, she’s an author that very much wins hope from the teeth of dystopia.” One of her recurring points “is that you can remain hopeful in the face of the worst oppression, the worst calamity. It’s staring difficulty in the face and still being hopeful. That’s what’s so powerful about it.”

Fifteen years after her death at the age of 58, her star seems to be rising. Earthseed, a concept developed in The Parable of Sowers, inspired an opera by folksinger Toshi Reagon, which debuted at the Public Theatre “Under the Radar” Festival in 2018. A 2015 anthology of short stories, Octavia’s Brood, honors her as it explores the connection between social movements and speculative fiction, including sci-fi, fantasy, magical realism and horror. Two televised versions of her novels are now in the works. Director Ava DuVernay is preparing a production of her novel, Dawn. At the same time, Amazon Studios and JuVee Productions are producing a drama series based on Wild Seed, the first book in her Patternist series. The Library of America is publishing her collected works and the novel, Kindred, was converted into a graphic novel and won the Eisner Award for Best Adaptation from Another Medium in 2018.

Butler was posthumously admitted to the Science Fiction Hall of Fame, and her work has inspired science fiction writers Nnedi Okorafor and N.K. Jemisin as well as actress/singer Janelle Monae. This year, NASA decided to name the landing site of the Mars rover Perseverance “Octavia E. Butler Landing.” This is the second astronomical site that carries her name: In 2018, a spot on Pluto’s largest moon, Charon, was given the moniker of “Butler Mons.” The Huntington Library, Museum, and Botanical Gardens in San Marino, California, holds Butler’s papers, and that collection, which includes research materials, notes and drafts, is the collection most requested by researchers at the library. The Huntington has launched a $50,000 fellowship program for writers dealing with her “ideas and issues.”

Montgomery believes that Butler’s prescience is evident today. “Her books did a lot of foreshadowing of current themes. . . that we’ve seen in the recent past both in government, in terms of climate change and pandemics, [and] the kind of issues that happen in inner cities and cities that are not sustainably run and places that kind of turn inwards on themselves.”

Tarshia L. Stanley, dean of the school of humanities, arts and sciences at St. Catherine University, argues that Butler’s dystopian works “jarred people into recognizing that she’s been doing this work all along. She’d been trying to tell us that if we do not make changes, this is what’s going to happen.”

In addition to the typewriter, Butler will be represented by a newly commissioned work of art by digital artist Nettrice Gaskins, who uses algorithms meant to be employed in machine learning to produce artworks. She will provide a series of portraits of featured futurists, including herself. Others include author and disability rights advocate Helen Keller, American sculptor and political activist Isamu Noguchi, and National Farmworkers Association co-founders Dolores Huerta and Cesar Chavez, inventor Alexander Graham Bell, frontline researchers in the global race for a Covid vaccine Barney Graham and Kizzmekia Corbett, computer scientist Margaret Hamilton, non-binary professional skateboarder Leo Baker, the multi-disciplinary educator Buckminster Fuller and the civil rights activist Floyd McKissick.

“I used styles that corresponded with each futurist,” Gaskins says. “When I created the futurist portraits, I collaborated with the A.I. [artificial intelligence] and fed the machine different styles to see what the results would be, then I chose the ones that captured what I imagined.” Mirroring characters in Butler's Parables series, “I'm finding ways to use A.I. to recognize my own power to affect and direct change or chance,” she says.

“The history of the future is both a matter of looking back and being amazed at people’s perceptiveness and insight, but it’s also a matter of realizing what people didn’t know and then also by extension . . . it helps you realize what we know and don’t know and the kind of fundamental uncertainty that we live in, but the importance of continuing to try to think about where we’re going,” says Adamson.

In addition to a look to the future, the “Futures” exhibition is colored by the context in which it was imagined. As a result of Covid-19, “none of us on the exhibition team have met each other, or very few of us have, because we’re doing the entire thing over Teams,” Adamson says. He refers to the process as “just kind of dislodged in space and time, obviously [touched by] the reality of the tragedy of the pandemic and the political turbulence of the last couple of years.”

“Futures” is on view at the Smithsonian’s Arts and Industries Building from November 2021 to July 2022.