View the Granddaddy of Political Scandals in Oils, Cartoons and Sculpture 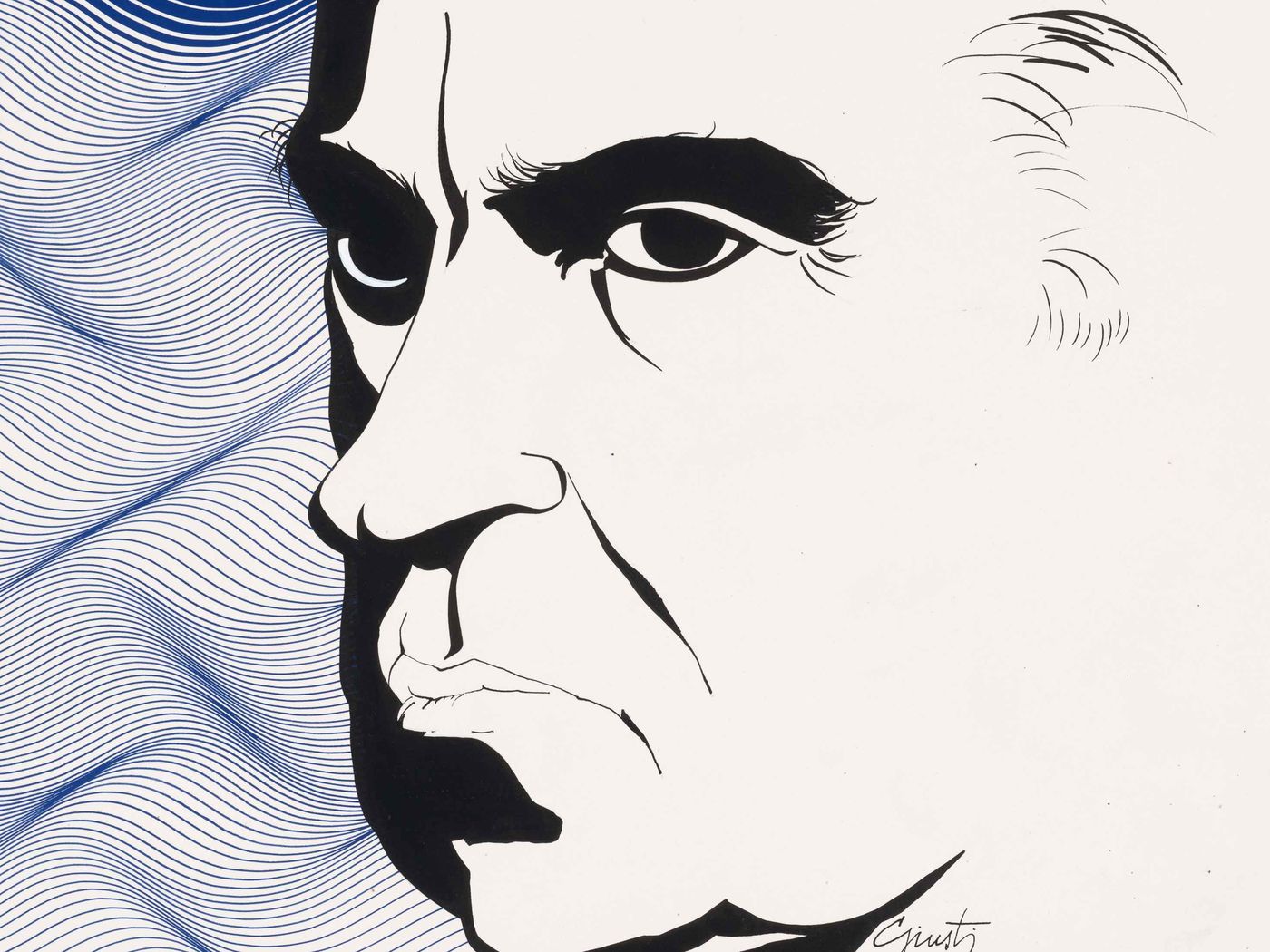 For political junkies of a certain age, the names Haldeman, Erlichman, Mitchell and Liddy are as vivid as those of North, Weinberger, Abrams and Hall during the Iran-Contra Affair, or Guiliani, Barr, Manafort and Papadopoulos in more recent years.

But it was Watergate alone that led to history’s only resignation of a U.S. President with nearly 50 others convicted or jailed, including several top White House officials. The scandal lingers, too, in the trope of affixing the "gate" suffix to seemingly every subsequent corruption, big and small, from the Carter administration's Billygate to the New Jersey Governor's Bridgegate to the National Football League's Deflategate.

It was 50 years ago on June 17, 1972, that a quintet of recruited so-called “plumbers” broke in to the Democratic National Committee headquarters at the Watergate complex of apartments, shops, offices and a hotel near the Potomac River in Washington, D.C.

It wasn’t until the following year—months after Richard Nixon’s landslide re-election in November 1972—that information came out tying the break-in to the president’s reelection committee, largely through the efforts of The Washington Post. The Senate established a select committee to investigate in February 1973, leading to a series of televised hearings that revealed a broad cover-up among other abuses of power, that led to Nixon’s resignation in 1974.

The golden anniversary of that lowly, ultimately consequential break-in is being marked two miles east of the Watergate complex at the Smithsonian’s National Portrait Gallery with an exhibition depicting some of the scandal’s prominent figures.

“We wanted to make sure portraiture was part of the anniversary conversation,” curator Kate Clarke Lemay says of the newly opened “Watergate: Portraiture and Intrigue.”

Largely comprised of the works of artists, cartoonists and photographers for use in journalism at the time, the exhibition shows the impact of interpreting major events through art. Watergate was the subject of more than 40 cover stories in Time magazine alone, Lemay says. Of those, 12 are in the show, part of the extensive collection of more than 2,000 cover art pieces donated to the museum by Time magazine since 1978.

Two prominent cover photographs stand out for the brief span of Nixon’s rise and his subsequent fall. A victory-sign-waving triumphant Nixon on election night in 1972 and taken by Dirck Halstead is strangely similar to the overhead wave the president made as he left the White House for the last time in 1974 in an image by George Tames, a longtime Capitol Hill photographer for The New York Times.

In between, there’s an illustration for Time of a brooding Nixon by Italian-born graphic designer George Giusti capturing the gathering clouds of scandal that would upend his presidency.

Nixon was a favorite subject for editorial cartoonists and he’s represented in the exhibition in a cartoon by Patrick Oliphant alongside a giant Kafka-sized bug, a reference to the surreptitious Oval Office recordings that helped seal the case against him.

Longtime Mad magazine cartoonist Jack Davis’s colorful Time cover in 1973 depicted the whirlwind of major names in the White House cover up—each painting fingers at the others— all while wrapped in the audio tape corralling them.

Draper Hill’s cartoon for the Memphis Appeal of a bare-chested Nixon afloat on a wave-battered boat with sharks circling, under the title “The Credibility Gulf Stream,” echoes Winslow Homer’s 1889 painting The Gulf Stream.

The clean lines of Robert Grossman’s cartoon illustrate a less remembered figure of the era, Sen. Howard Baker, the Tennessee Republican and ranking member of the Senate Watergate Committee, who posed the question: “What did the President know, and when did he know it?” (The cover on display, though, is from 1982, when Baker was Senate Majority Leader, in his role as “great conciliator” between Congress and the White House.)

Still active at age 93, the scathing cartoonist Edward Sorel took colored pencil to paper in 1972 to illustrate Attn. Gen. John Mitchell’s snide remark that Washington Post publisher Katharine Graham would "get her tit caught in a big fat wringer" for trying to publish the information dug up by the  reporters Bob Woodward and Carl Bernstein. “Mitchell loved The Washington Post in 1971 because they corrected an error,” Lemay says. But a year later he was issuing vulgar statements about its publisher when they were looking closely at the White House's dirty tricks. In the cartoon, however, it is Mitchell, in prison stripes, who is caught in Sorel’s wringer, while Graham waves goodbye to him.

Mitchell was sentenced in February 1975 to two and a half years in prison for his role in the Watergate break-in and cover-up. He had tried to keep his wife Martha Mitchell from learning about Watergate or talking to reporters, a drama depicted in the new limited television series “Gaslit” on the STARZ network and starring Julia Roberts and Sean Penn as the power couple in question. Martha Mitchell also earns a prominent place in the exhibition, in a 1970 Jan De Ruth oil portrait commissioned by Time, but the work wasn’t commissioned for her attempt to blow the whistle on White House officials, including her husband. It was for a feature story titled “The Wives of Washington.”

“Imagine being a socialite, Arkansas born, and she’s featured in Time magazine—great, except she’s featured for being a wife,” Lemay says. Women’s roles in the early 1970s were still very limited, particularly in Washington, she says.

“This is a very dignified portrait. It’s colorful, certainly eye catching and it lends a humanity to a figure who,” Lemay says, “was kidnapped, sedated, drugged.” As a feminist, she adds, “This is something I wanted front and center in this show … to make sure people know about her story and appreciate what she was—a whistleblower.”

Other conventional-looking oil portraits include John Kirthian Court’s 1983 profile of Barry Goldwater, the Republican senator and former Presidential candidate, who had to level with Nixon in August 1974 about his survival chances, and Sen. Samuel Ervin, the folksy North Carolina Democrat who became chair of the special committee.

Some Time covers featured a mixed media approach. A second work by Giusti has Mitchell’s face on that of a bleach bottle. Stanislaw Zagorski’s painting of John Dean contains actual tweed on his sports coat. The most elaborate piece may be the one by Marisol Escobar, the Venezuelan-American sculptor who created a kind of Mount Rushmore parody in pink marble of Nixon and his national security adviser, Henry Kissinger. Completed for the “Men of the Year” cover story of 1973, titled “Triumph and Trial,” with an eerie glass eye affixed to the Kissinger likeness.

The most artful aspects of the exhibition perhaps are a trio of portraits by photographer Richard Avedon, commissioned for a Rolling Stone issue in 1976 about Washingtonians in power. Some were Watergate figures while another was not known to be one until much later.

Among them is Rose Mary Woods, the White House secretary who demonstrated during the hearings that her “accidental” erasure of a key 17-minute portion of the Nixon tapes would have been a stretch. Another is William Ruckelshaus, the deputy attorney general who resigned rather than fire Watergate special investigator Archibald Cox, a sequence that became known as the “Saturday Night Massacre.”

A third Avedon subject is Rep. Barbara Jordan, a key member of the House Judiciary Committee who voted to impeach Nixon for obstruction of justice, abuse of power and contempt of Congress. But the fourth Avedon subject, Mark Felt, then identified as a former deputy director of the FBI, wasn’t revealed to be the “Deep Throat” who leaked information to Washington Post reporter Bob Woodward, until 2005, when he was 91.

Unlike some of the satiric works in the exhibition, Lemay says that Avedon’s black and white portraits are “respectable, dignified, and give a different glimpse of the humanity of the subject.”

“Watergate: Portraiture and Intrigue” continues at the Smithsonian’s National Portrait Gallery in Washington D.C. through Sept. 5, 2022.