Martha Mitchell Was the Brash ‘Mouth of the South’ That Roared 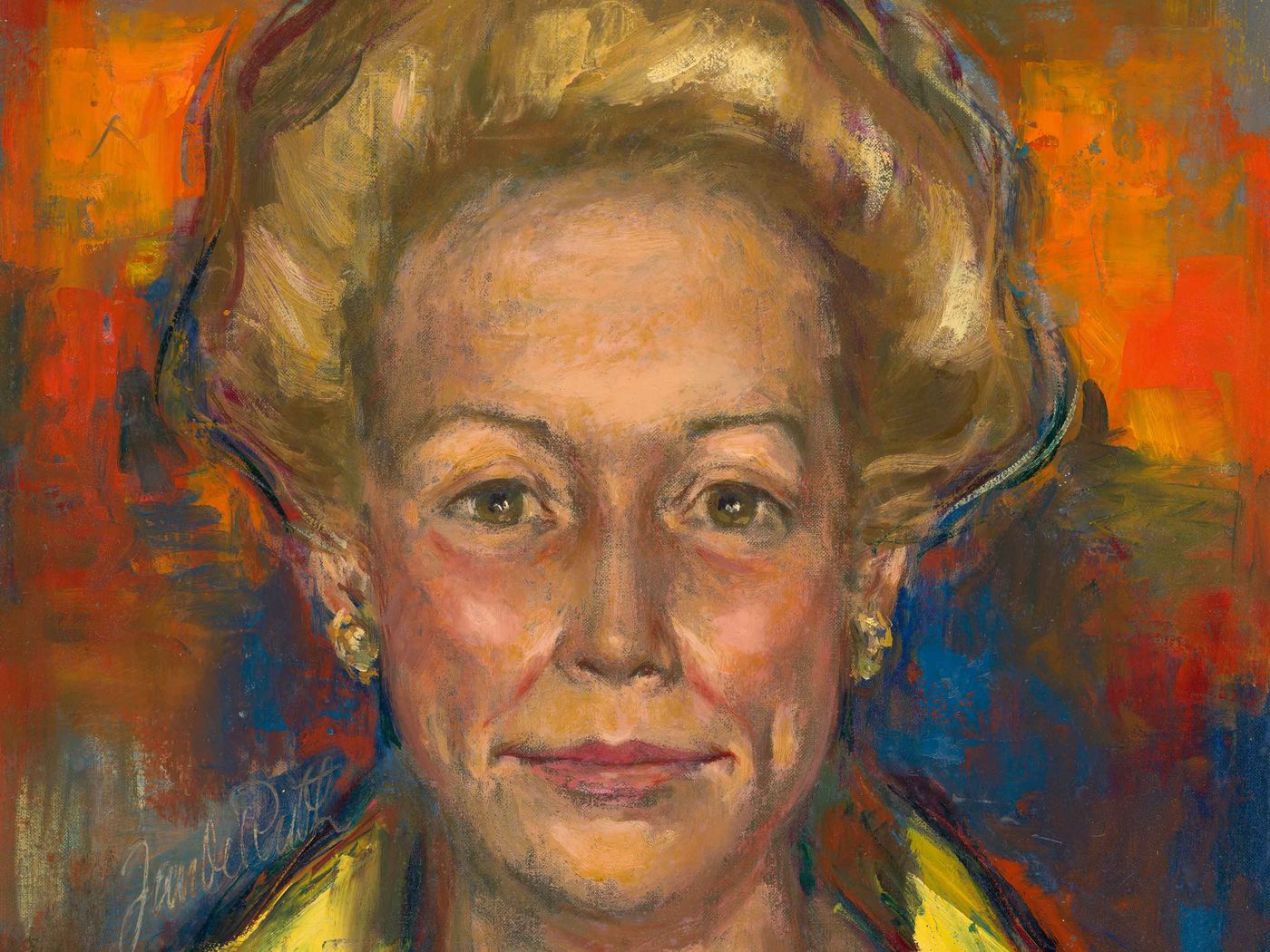 At the Smithsonian's National Portrait Gallery, the story of the Watergate whistleblower Martha Mitchell (detail, oil on canvas, Jan De Ruth, 1970) from Pine Bluff, Arkansas—who pundits dubbed the "Mouth of the South"—is revisited in a new exhibition, "Watergate: Portraiture and Intrigue." NPG, gift of Time magazine

Many dismissed her. An outspoken conservative of the 1970s, Martha Mitchell was characterized as a brash, crazy drunk with a wild imagination. And when she claimed in June 1972 that one of President Richard Nixon’s cronies abducted, drugged and beat her, few recognized that her whistle-blowing on these “dirty tricks” was just a taste of the Watergate scandal to come.

The saga that rocked American politics began when five men were arrested at the Watergate, a Washington hotel and office complex, while trying to bug the Democratic National Committee’s headquarters. That initial incident on June 17, 1972, started a series of investigations that implicated multiple members of Nixon’s circle—and eventually, the evidence went all the way up to the president himself.

On August 8, 1974, Nixon, facing impeachment and an almost certain conviction in the Senate, announced his resignation, effective at noon the following day.

When Mitchell died from a rare bone cancer at age 57 in 1976, her role in cracking the corruption case, historians say, was largely forgotten. But now, five decades later, Mitchell’s story is being revisited in a new STARZ television series, “Gaslit,” starring Julia Roberts—and perhaps, her reputation is being redeemed.

“After her death, she was largely consigned to a footnote in the Nixon years and the administration,” says Garrett M. Graff, author of the new book Watergate: A New History. “It’s really only within these last five to seven years that she’s been resurrected and sort of re-centered in the telling of the Watergate story and that she was a very central figure … of the Nixon White House … both on its way up and on its way down.”

In the summer of 1972, Mitchell was on the phone in her hotel room in Newport Beach, California, with famed UPI reporter Helen Thomas when a security guard for Nixon’s campaign—Stephen King, a former FBI agent—walked over and yanked the cord out of the wall. Mitchell said that for the next 24 hours, the guard refused to let her leave, denied her food, physically injured her and drugged her. King denied the incident, and went on to have an illustrious career, and later became President Donald Trump’s ambassador to the Czech Republic.

The incident, dismissed by many as a hysterical woman’s delusion, became only a footnote in the constitutional crisis of the moment. Mitchell was trying desperately to save her country, but her accusation was never taken seriously.

In the eight-part television series, debuting on April 24, Roberts co-stars with Sean Penn, who plays Martha’s husband, John N. Mitchell, Nixon’s attorney general who later authorized the Watergate burglary while in charge of the Committee to Re-Elect the President (CREEP).

And now, on the first floor at the Smithsonian’s National Portrait Gallery in Washington, D.C., you can see Mitchell’s portrait and 23 other works of art in the new exhibition “Watergate: Portraiture and Intrigue,” on view through September 25. The show includes art from a dozen Time magazine covers, along with photographs, caricature drawings and sculptures from this chapter in American politics.

“There was no question in my mind that we needed to put the Martha Mitchell portrait on view and tell her story,” says the museum’s acting senior historian Kate Clarke Lemay, who organized the exhibition. “I wanted to make sure that she wasn’t a marginal figure because her story is important.”

“Watergate: Portraiture and Intrigue” seeks to explore dirty politics and abuse of power, and questions about limits on presidential executive power, Lemay says. Each art piece is accompanied by written biographical information in English and Spanish, so visitors can learn about the context surrounding Mitchell and the other characters in the Watergate scandal.

The television series and the Smithsonian exhibition’s timing both coincide with this summer’s 50th anniversary of the break-in. Lemay says Mitchell was indeed gaslit (a reference to the 1944 film “Gaslight” in which a husband manipulates his wife into thinking she’s losing her mind) and not treated fairly and says she can’t wait to see the series.

“l love Julia Roberts,” she says. “I’m really interested to see how she plays Martha Mitchell and gives her more depth and nuance.”

Czech-American artist Jan De Ruth created the Mitchell painting for the cover of the November 30, 1970, issue of Time, which featured the article “The Wives of Washington,” including Mitchell. The oil-on-canvas painting shows intricate details and the subject’s expressive eyes, and is beautiful and respectful, Lemay says.

“It depicts Martha Mitchell with dignity. I’ve seen some portraits of her that are not very dignified,” says Lemay. “I was really happy to see that this portrait was treating her well because she had been so badly maligned by the press and Nixon and the smear campaign about her.”

Graff calls Mitchell “one of those defining characters or figures of an era who then is quickly forgotten by American history.”

“She was in many ways the first conservative media pundit—the forerunner for Rush Limbaugh,” says Graff, who is a former editor of Washingtonian and Politico magazines. He also calls Mitchell a bit like the Sarah Palin of her day.

“She was this big, loud, brash woman from Arkansas, the ‘Mouth of the South,’ who arrives in Washington as the wife of the attorney general,” he says. “Within a couple of years, she establishes herself as the most in-demand Republican speaker in the country, after the president himself.”

People saw Mitchell not as a government official and elected politician in her own right, but as a loudmouth pundit, Graff says. “She was celebrated by the right for her attacks, and the way that she defended the president and lambasted his enemies.”

Then, this hero of the right becomes the whistleblower on her own side—and America watched her unravel as the Watergate story unfolded, Graff says.

One of the ironies of the scandal, he says, is how much of it takes place at the Watergate residential complex, where Mitchell would often sit in their condo in the evening and eavesdrop on her husband’s conversations. Recognized as having a major problem with alcohol, Mitchell became known throughout Washington for late-night drunken telephone calls to reporters after her husband went to bed.

Mitchell had developed an almost cartoonish public image both before Watergate and after, when she told the story of her abduction. She was seen as a Cassandra-like figure of her time, reflecting the Greek mythological character who uttered true prophecies no one believed.

“The tragedy of Martha Mitchell post-burglary is that she’s just seen as a joke,” Graff says. “Her warnings about Nixon’s treachery and her stories of her own mistreatment are seen as coming from a kook. The shame and sadness of her story looking back is that she just wasn’t taken seriously in that final chapter, because Washington had gotten so used to her as a punchline pre-Watergate that that was the lens though which she was viewed after Watergate.”

Lemay notes the courage it took to be a whistleblower against Mitchell’s own side and even against her own husband; the couple eventually divorced after an explosive split.

“She came out fiercely in the name of justice,” says Lemay. “She was married to a guy that lost sight of the limits of power, and then she had to deal with the ethical dilemmas because she knew about his involvement with the break-in. I do think that she as a woman was vulnerable. Her label as a wife of Washington meant she was not allowed to have her own career.”

Graff says that time and telling her story helps to redeem Mitchell’s reputation.

“The shame in many ways,” he says, “is that she was not believed or taken seriously in her time and has been proven right about most of what she was saying about the Nixon administration in the wake of the break-in.”

“Watergate: Portraiture and Intrigue” is on view at the Smithsonian’s National Portrait Gallery through September 25, 2022.

Kellie B. Gormly is an award-winning veteran journalist who freelances for national publications including The Washington Post, German Life, and Catster. She is a former staff writer for the Pittsburgh Tribune-Review, The Associated Press and the Fort Worth Star-Telegram.