Cleopatra’s Iconoclastic Sculptor Was Her Own Kind of Queen

Smithsonian podcasts delve into the life of Edmonia Lewis, how astronauts sleep, the evolution of the human brain; and drop in on painter Kay WalkingStick 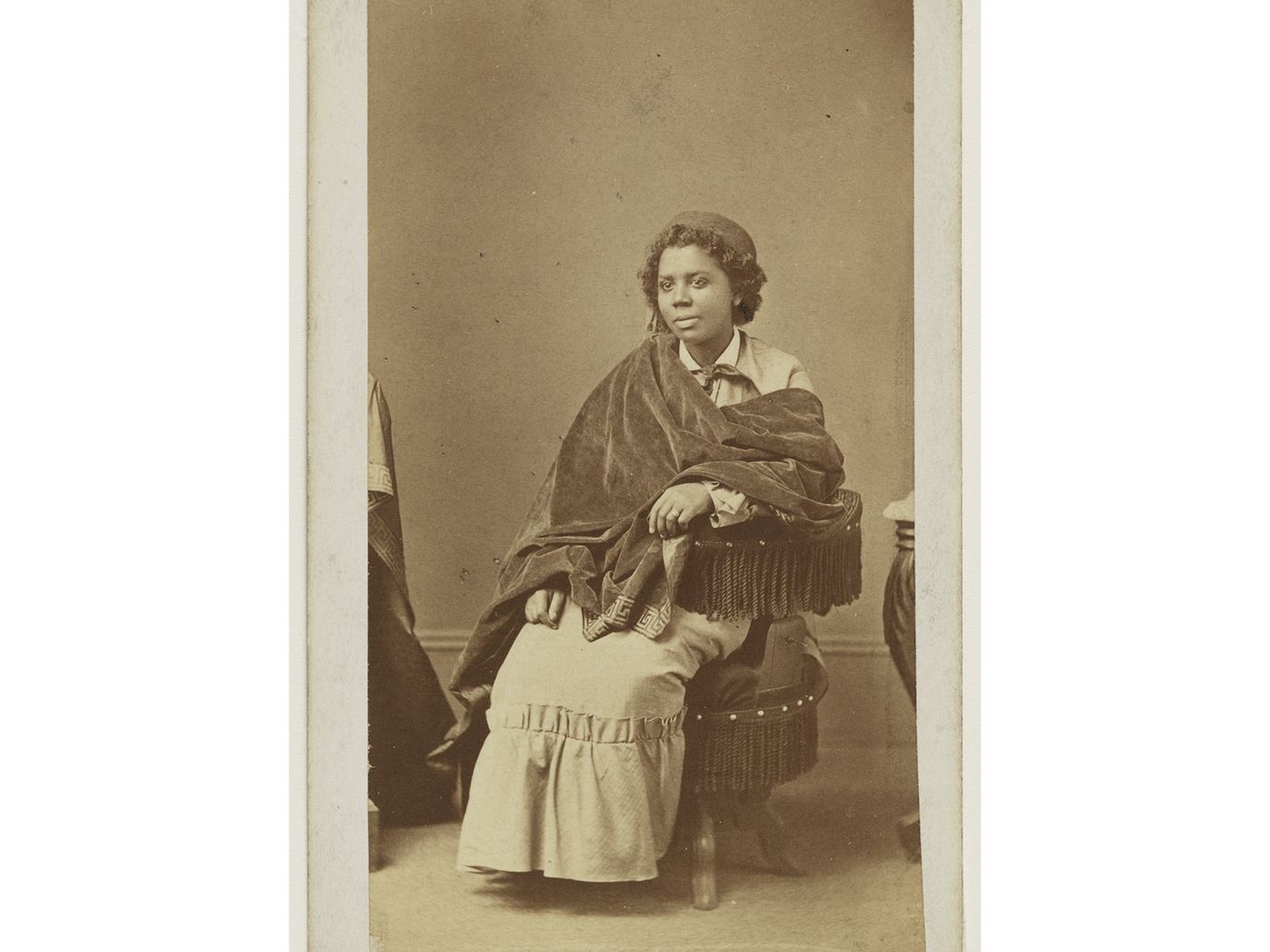 This month, Portraits, a podcast from the National Portrait Gallery, revisits "Finding Cleopatra," a Sidedoor episode with host Lizzie Peabody exploring the life of the artist Edmonia Lewis (above: a photographic portrait by Henry Rocher, c. 1890). NPG

One hundred fifteen years after her death, the trailblazing Black and Native American sculptor Edmonia Lewis—the first American woman of color to achieve international recognition in this artistic discipline—is having a moment. In January, the United States Postal Service honored her with a Forever Stamp. And in June, Lewis was finally awarded her diploma from Oberlin College, more than a century-and-a-half after she’d been forced to leave without graduating.

The circumstances of her premature departure had been unjust. Lewis was accused (and acquitted) of poisoning two of her white housemates, who’d been caught taking a sleigh ride with two men in defiance of Oberlin’s ban on unsupervised co-ed socializing, and defended themselves by claiming Lewis had slipped them the aphrodisiac Spanish fly.

Oberlin was unconvinced, but the school constable eventually took Lewis into custody to protect her from further harm after a group of men abducted, stripped and beat her. The assailants may have been incited to commit these crimes by a series of inflammatory articles in the Cleveland Plain Dealer. The newspaper had long held that Oberlin’s co-ed student population—and especially its willingness to admit Black students in an era when 90 percent of the United States’ Black population was enslaved—were both catastrophes in the making, and looked for stories to prove its case.

Recovered from her injuries and cleared of the poisoning charges, Lewis was finally asked to leave after a professor alleged, without evidence, that she had pilfered some art supplies.

Lewis biographer Kirsten Buick spoke with Sidedoor host Lizzie Peabody for the 2019 episode “Finding Cleopatra,” a classic from Season 4 that the National Portrait Gallery, home to a gorgeous c. 1870 photograph by Henry Rocher, recommends listeners revisit. (They’ve hosted the episode, with a new introduction from the museum’s director and Portraits podcast host Kim Sajet, on the Portraits feed this month.)

One of Lewis’s signature pieces, The Death of Cleopatra, fell out of sight for approximately a century before curator and historian Marilyn Richardson tracked it down in storage at a suburban Chicago shopping mall in 1988. As Richardson tells Peabody, the 3,000-pound white marble sculpture had spent a period as a decoration inside a saloon—after being acquired by “a member of the saloon underworld,” who may have meant it as a memorial to his beloved horse, Cleopatra—before being exhibited on a golf course, outside a torpedo plant, and finally, in a storage room among chintzy holiday decorations. Fortunately, the artwork now resides in the collections of the Smithsonian American Art Museum.

Cleopatra was a frequent subject of portraiture in the 19th century. But she was also a grand subject for artistic interpretation, because no one knew what the ancient queen, who’d died in 30 B.C., looked like.

Lewis’s choice to sculpt Cleopatra with distinctly African facial features was supported by her own research—she went to the Vatican and examined coins minted with the Egyptian ruler’s profile while the queen was still alive—but still rife for interpretation as a political act in her time.

“For abolitionists, Cleopatra was a symbol of what Black Africans could do if left to themselves,” Buick explains. “For pro-slavery groups, she was Greek and descended from the Ptolemies. That's the only way you could explain her greatness: that she was racially white.”

Karen Lemmey, the Smithsonian American Art Museum’s curator of sculpture, tells Peabody that for Lewis to ground her depiction in research was a savvy way of sidestepping the “debate” over Cleopatra’s race. “Especially in the 19th century, where you have this kind of imagining and reimagining, and fantasy of Egypt and Cleopatra, it's important that [Lewis] offers this anchor back into the historical record,” Lemmey says.

For Lemmey, Lewis’s rendering of the legendary queen offers clues as to how the sculptor perceived her own place in the world.

Depicting Cleopatra moments after her death, “Lewis wanted to show Cleopatra holding all the cards, claiming her last chapter, writing her history,” Lemmey says. “It's especially extraordinary when you think this is made by a woman sculptor at the end of the 19th century, who herself has completely broken with convention. She is unmarried, she is successful. And, she too is, is so much in control of her career.”

Lewis spent four years sculpting The Death of Cleopatra, and much of her worldly wealth to acquire the marble and finally ship the finished sculpture from Rome to Philadelphia for display and potential sale at the United States Centennial Exhibition. While the piece was a hot topic of conversation, it did not sell, and Lewis, whose stateside fortunes seemed to have dimmed, left it behind when she returned to Europe, where she continued to support herself as an artist for another three decades. When she died, she left her estate of roughly 60,000 pounds to the Catholic Church. And no one knows much more about her than that.

For Buick, the fact that so little is known of the intimate details of Lewis’s life is part of what makes her such a compelling subject. “She was complicated and her life was complicated,” she tells Peabody. “As art historians and as writers, we follow narrative forms that I don't think do justice to our subject. We try to end on a high note or a low note and I chose to end elsewhere. She remains unknowable. And that's not a bad thing.”

Elsewhere in the Smithsonian Podosphere

“Did Meat Make Us Human?” asks the newest episode of Sidedoor, guest-hosted by producer James Morrison. The theory that eating meat, high in calories and rich in nutrients, was a major accelerant in the evolution of early humans’ brains around two million years ago, has long been conventional wisdom. But in 2020, Briana Pobiner, a paleoanthropologist with the Human Origins Program at the Smithsonian's National Museum of Natural History, and George Washington University paleoanthropologist Andrew Barr, discovered that the truth of how our brains grew up is more complex.

AirSpace examines the problem of catching Zzzzzzzs in zero-g—well, microgravity—and experiencing multiple sunrises and sunsets per “night” in their episode “How Do You Sleep?” Astronaut Mike Massimino, a veteran of 2002 and 2009 Space Shuttle missions, both of which serviced the Hubble Space Telescope, tells hosts Emily Martin, Nick Partridge and Matt Shindell: “The Space Shuttle was kind of like a slumber party.” Massimino and his crewmates all used sleeping bags and kept the same waking hours. Aboard the International Space Station, crew shifts vary and accommodations are slightly more comfortable.

This month on ARTiculated: Dispatches from the Archives of American Art, hosts Reggie Reid and Sabine Lipten welcome Brooklyn-based painter Maia Cruz Palileo, who tucks into a 2011 oral history of Kay WalkingStick, a Cherokee painter whose oeuvre explores women's sexuality, the interdependency of humanity and nature, and Native heritage. In the episode “Gut and Heart: Painting with Kay WalkingStick,” Palileo is left with some lingering questions. So Palileo telephones the now 87-year-old WalkingStick, who shares some advice her mother gave her and grapples with the question of her own legacy.