Can Cultural Treasures in Occupied Ukraine Be Saved? 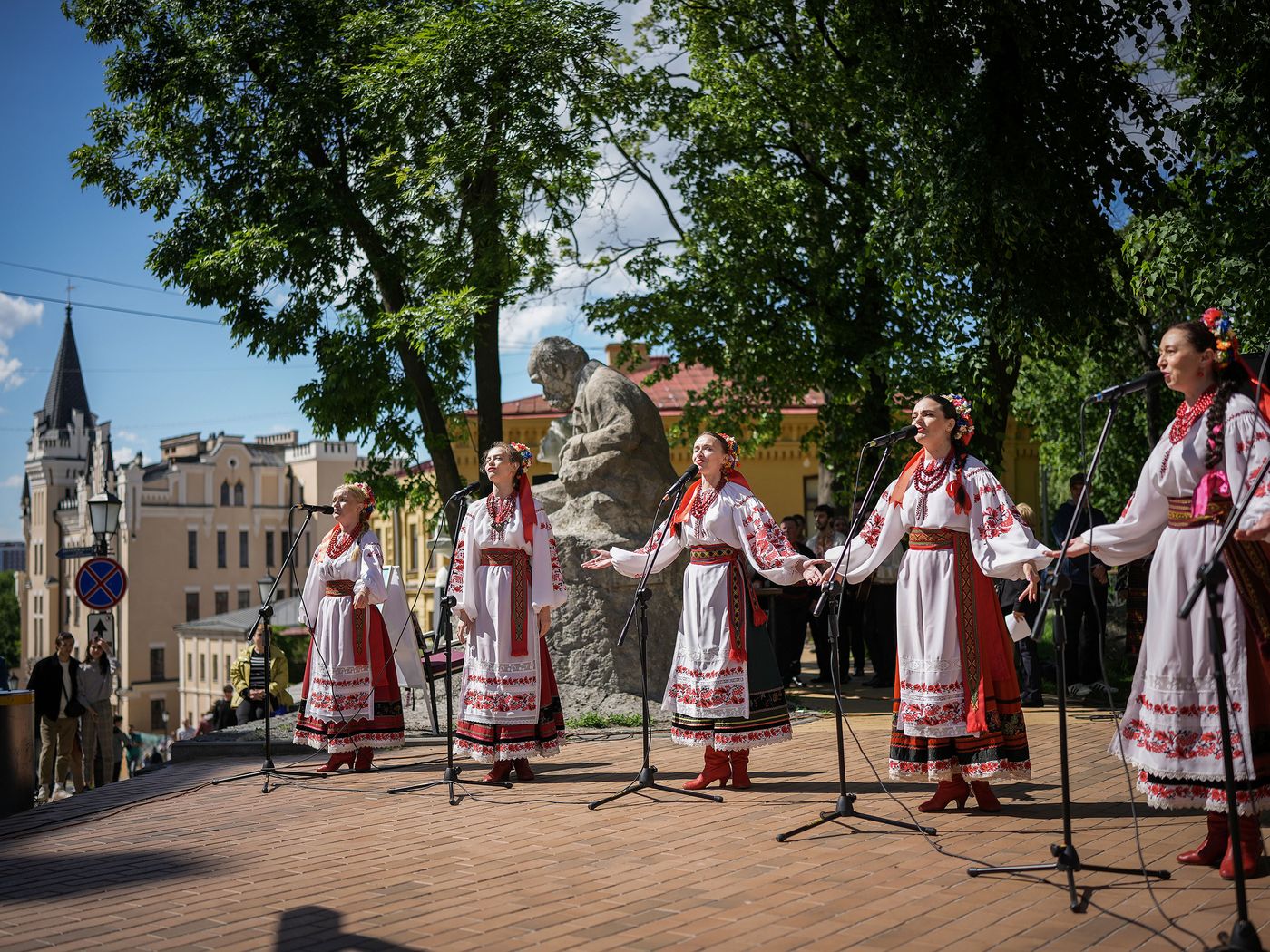 Despite the Russian invasion, traditional Ukrainian folk singers performed as part of the celebrations for Kyiv Day  on May 28, 2022. Christopher Furlong, Getty Images

The heist genre has long been a staple of cinema, an enduring fantasy where sharp-dressed, silver-tongued thieves execute a brilliantly convoluted plot to purloin some exotic MacGuffin—often an irreplaceable historic artifact or a singular work of art. Disguises, diversions and stagecraft, that’s the fantasy.

In reality, the physical treasures that represent the cultural traditions of a nation or a people are more often threatened by natural disaster or, more darkly, by genocidal intention. That fact has necessitated the creation of the Smithsonian’s own rapid-response task force—an origin story that host Lizzie Peabody investigates in the latest episode of the podcast “Sidedoor.”

The special unit is called the Smithsonian Cultural Rescue Initiative. Unfortunately, its acronym SCRI isn’t pithy or memorable like SHIELD or SPECTRE. Even more unfortunately, this year SCRI’s expertise has been in demand more than ever before.

In February, following President Vladimir Putin's decades-long campaign to refute Ukraine’s national identity, Russia invaded the neighboring nation. Evidence soon emerged of the deliberate destruction of Ukraine’s cultural heritage. That month the Ivankiv Museum of History and Local Lore in the Kyiv Oblast of northern Ukraine was destroyed. Since then, roughly 500 other cultural heritage sites have been threatened by the conflict with 108 confirmed to have been damaged.

Reviewing satellite imagery of the Ivankiv Museum, Hayden Bassett, director of the Cultural Heritage Monitoring Lab in Martinsville, Virginia, noticed that while nearby buildings and sidewalks remained intact, the roof of the museum was blown off and its contents burned. “The ash and debris is spilling out of windows,” Bassett tells Peabody, explaining that the museum is only a shell of what it once was. “This was a very significant museum.”

For the past decade, SCRI has been preparing for this moment, training first responders in the military and law enforcement, as well as on-the-spot conservators and other museum professionals to operate in crisis and wartime conditions. With the Cultural Heritage Monitoring Lab—a joint venture between the Smithsonian and the Virginia Museum of Natural History—keeping tabs on some 28,000 cultural sites in Ukraine, the good news is that there remains a lot that can still be saved.

The Smithsonian created SCRI in the wake of the magnitude 7.0 earthquake that struck Haiti in January 2010. The devastation was catastrophic: 200,000 people dead and more than 1.5 million displaced. Olsen Jean Julian, who was Haiti’s Minister of Culture at the time, recognized that with the destruction of museums, libraries and churches—all the buildings that housed Haitian heritage in the form of books and artworks and other expressions of culture—that the tragic human toll might be compounded by a spiritual one.

Julian had met Richard Kurin, who today is Smithsonian’s Ambassador-at-Large, but Kurin had spent many years organizing and producing the Smithsonian Folklife Festival on the National Mall. The two had worked closely together on the 2004 festival program celebrating the bicentennial of Haiti’s independence.

A week after the 2010 earthquake, Kurin was in a Washington, D.C. meeting of governmental and other officials trying to figure out how to help Haiti. One by one, the participants admitted that they couldn’t help.

Kurin was incredulous. So was another attendee at that meeting, Cori Wegener, who holds a set of credentials that seemed tailor-made for the situation. She was both a curator at the Minneapolis Institute of Art and served as a monuments officer in the U.S. Army reserves. Wegener knew that Kurin’s experience marshaling the logistical and financial hurdles of building the Folklife Festival’s little tent city each summer on the National Mall, one of the most heavily regulated plots of lands on the world, had given him a reputation as a hands-on problem-solver. But she was still skeptical when, at the end of that uninspiring meeting, Kurin asked Wegener to stay behind and find a solution.

“Two weeks later we were in Haiti,” Wegener says.

With Julian, the pair set up what Kurin likened to a Folklife Festival in Port-au-Prince, establishing, in Julian’s words: “a cultural recovery base to save everything we could.”

The pop-up operation took on the name the Haiti Cultural Recovery Project, and the Haitian government asked the Smithsonian to run it. A quarter-million in startup cash came from an unexpected source: The Broadway League in New York, which had begun raising money to fund the cultural preservation. This enabled Wegener not only to conduct basic preservation to “stabilize” weather-damaged artifacts, but to begin teaching emergency conservation to a group that eventually numbered some 150 Haitian representatives of various cultural organizations. (Read this related article about how the devastation in Haiti launched a worldwide effort to safeguard cultural heritage.)

Kurin and Wegener didn’t yet realize they were establishing a template to respond to future calamities. But that became clear when, not long after his return to Washington, Kurin took a call from another old Folklife Festival collaborator, Samuel Sidibé—head of the National Museum of Mali.

Sidibé had heard about the work done in Haiti. “Richard, we have terrorists who are burning manuscripts in Timbuktu,” Kurin recalls. “We feel our collections are endangered by terrorism. Can the Smithsonian help us?’

Kurin agreed to help. And he immediately called Wegener in Minneapolis.

Heading up the SCRI became Wegener’s full-time job with operations over the next few years in Egypt, Nepal and Syria protecting artifacts imperiled not by acts of God but the cruel acts of war. After ISIS began publishing videos of its members taking power tools and sledgehammers to ancient sculptures in Iraq’s Mosul Museum—a war crime, under the 1954 Hague Convention—Wegener and her crew received training from the FBI’s Art Crime Team, learning how to document evidence, for use in potential prosecutions and to be able to detect whether or not missing artifacts had been destroyed, or stolen and trafficked. (Read this related article on Mosul’s road to recovery.)

The first person to take part in an SCRI training course was Ihor Poshyvailo, the director of the Maidan Museum in Ukraine’s capital city of Kiev. That was in 2014, the year that Russia annexed Crimea.

Reading the writing on the wall, Poshyvailo began preparing for an invasion of his own country, and training other curators with the Smithsonian’s methods. By the time Russian forces arrived, he and his colleagues had already packed up and hidden their most valuable artifacts. He continues to adapt what he’s been taught, traveling with his colleagues to other damaged museums and saving what he can as the Russian attacks rage on.

Wegener tells Peabody that the crises that forged this kind of knowledge aren’t going away. But what has grown out of the ad hoc response that she and Kurin built in Haiti a dozen years ago has given her a sense of optimism that the manifold crises of the 2020s won’t destroy the priceless treasures of eras past.

“Culture is still being lost, we're still having armed conflicts, all those things are terrible,” she says. “But seeing a world now in 2022 that has hundreds of cultural professionals who have training in how to respond in wartime —in 2003, I could count them on a hand. And now we have this big network of people. And it's not just Smithsonian—it's a movement.

“We don't have to sit around and wait for things to happen to us. We can make our field more resilient and be able to keep our heritage safe.”