The arduous process, says the Smithsonian’s Richard Kurin, is “a victory over violent extremism” 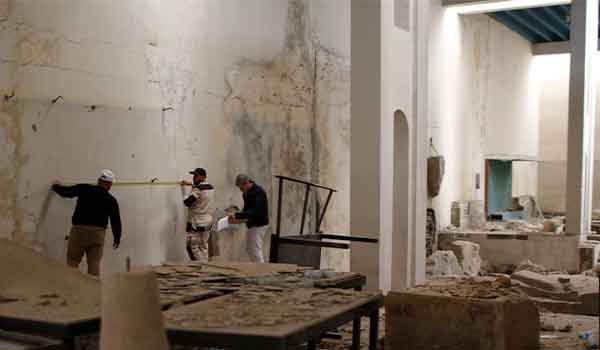 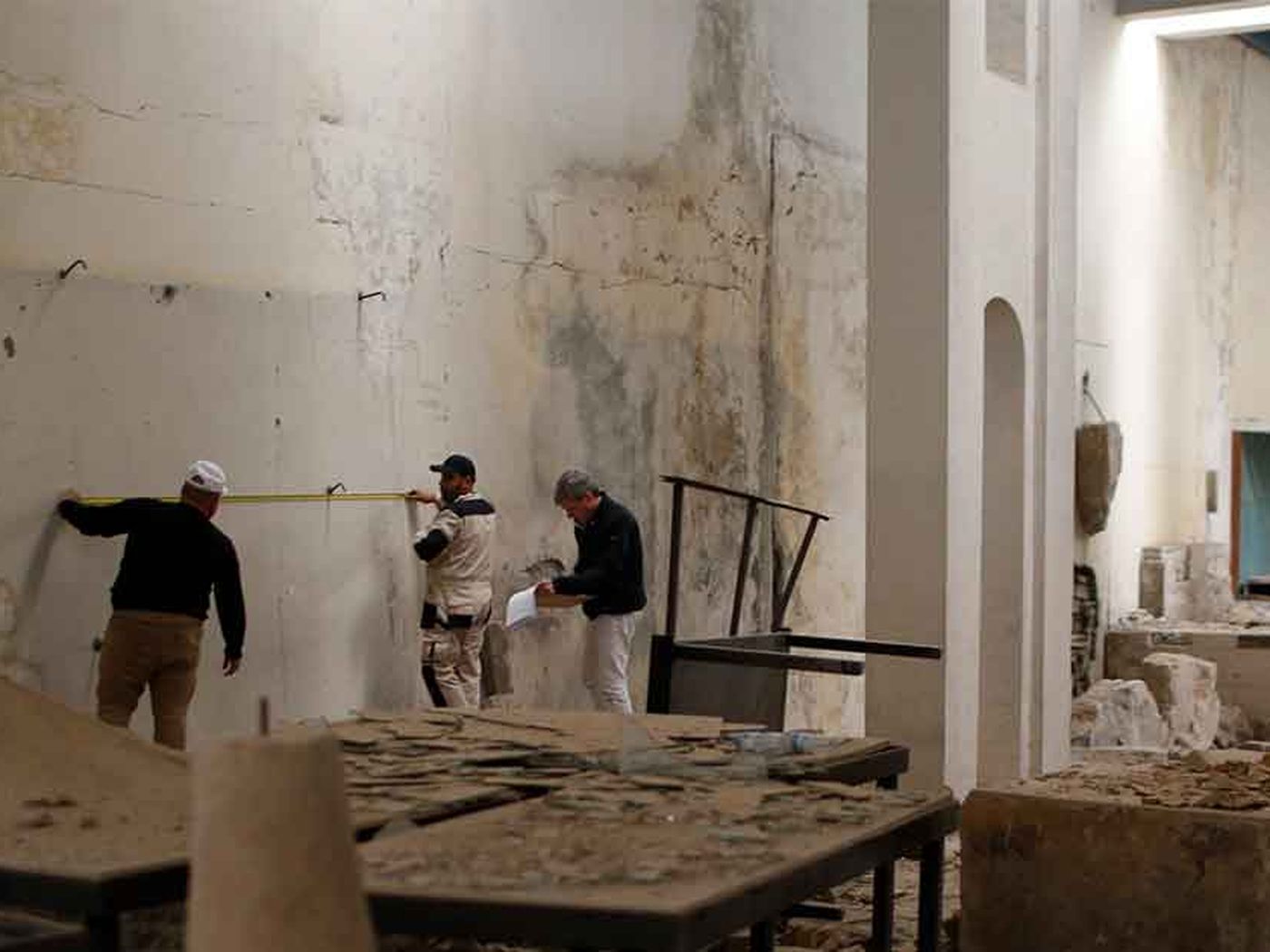 Engineers concluded that the museum building (above: the Assyrian Hall in February 2019) was structurally sound and could be repaired. But much work would need to be done. Sebastian Meyer

The Mosul Cultural Museum in Iraq burst into global consciousness in February 2015 when ISIS, the extremist, terrorist organization locally known as Daesh, posted videos of its adherents toppling the museum’s ancient statues, smashing artifacts off the wall, burning documents and severely damaging its main building.

The world understood this was not an act of just shattering limestone and alabaster, setting fire to paper and breaking windows. ISIS was trying to destroy history itself, the record of preceding civilizations—including Islamic ones, which had once occupied and influenced the city; and bring ruin to a region that had served as a cultural crossroads for millennia.

Now, after several years of emergency repairs and preparatory work, the museum is firmly on the road to rehabilitation and eventual reopening. A coalition of international groups including the Smithsonian Institution, Musée du Louvre, World Monuments Fund and the ALIPH Foundation, has joined together with Iraq’s Ministry of Culture and its State Board of Antiquities and Heritage to renovate the buildings and restore collections, install exhibitions, develop visitor amenities and train staff.

In a signal of what is to come, this past November visitors arrived at the museum’s partially restored royal reception hall in an adjacent older building to admire the contemporary works of Omer Qais, a local Iraqi artist. The staff and local residents took heart from this temporary exhibition as a harbinger of the museum’s eventual recovery.

In 2014, ISIS conquered the multi-ethnic, multi-religious city of Mosul—Iraq’s second largest—announcing its expanding terrorist aspiration. Mass executions, destruction of infrastructure and commerce, and a refugee crisis followed. At the Mosul Library, books were lit on fire. Sites like the Tomb of Nebi Yunis (Prophet Jonah) were leveled. Massive sculptures at the city’s archaeological site of Nineveh were jackhammered. At Nimrud, the huge 900-acre archaeological site of the Neo-Assyrian capital—dating to 800 B.C. and located some 20 miles outside Mosul—ancient palaces, gateways and buildings were blown up.

As the city and surrounding region were being secured, Iraqi cultural leaders like Ali Hazim, Nineveh provincial inspector of archeology and heritage, Zaid Ghazi Saadallah, archaeologist and Mosul Museum director, and State Board of Antiquities and Heritage officials faced a maelstrom of cultural destruction.

Smithsonian archaeologists and cultural heritage workers who had for years guided instructional programs at the Iraqi Institute for the Conservation of Antiquities and Heritage in the nearby city of Erbil joined with Iraqi colleagues and other experts to begin planning the recovery efforts.

Nimrud came first. An Iraqi-American team staged in Erbil and then, when it became safe, headed out to start working on site. UNESCO arranged to build a fence around the complex, the Iraqis provided security and the Smithsonian crew, working with Ghazi and others provided training, expertise, vehicles, equipment and supplies for the recovery. Over the past three years Iraqi-American teams have documented the damage, successfully moved hundreds of tons of massive fragments of shattered monumental sculptures, built a storage facility and began the conservation of archaeological remains. The on-going tragedy is that what ISIS took minutes and hours to destroy will take years to fully restore.

When downtown Mosul was finally secured, the Smithsonian turned its attention to the Mosul Cultural Museum. The museum, Iraq’s second largest after the National Museum in Baghdad, stands near the old city center. It had opened its doors in 1952 in the adjacent royal reception hall, but having outgrown that, moved into a larger, modernist main building constructed in its garden in 1974.

The museum hosted galleries devoted to Assyrian, Hatrean and Islamic civilizations; and contained exhibit space for prehistoric artifacts, a library, a lecture hall and areas for staff and storage. Among the most dramatic pieces in the few thousand item collection were large sculpted Lamassu—ancient guardian figures.

In 2018 at a meeting in Erbil, Zaid Ghazi and Ali Hazim showed the Smithsonian team images of the museum—a massive hole punctuated the Assyrian gallery with debris and boulder-sized remains of the Lamassu strewn about. The building’s infrastructure was in terrible disrepair. Ghazi showed our team a photograph that to me looked like snow and slush in the museum’s basement.

“That’s what ash from 25,000 burnt books and manuscripts looks like,” he somberly responded.

Compared to what the well-organized library had looked like prior to the ISIS rampage, the scope of the recovery project ahead was daunting.

We learned that some of the collection had been safely spirited away and stored, however inadequately, across the river and spared from destruction. Ghazi identified security and safety problems that needed to be addressed immediately given the damage, neglect and looting. We started planning for more formal assessments of the museum and its immediate stabilization and security.

The Iraqis requested funds to help with the recovery of the Mosul Museum from ALIPH—an international foundation founded as a result of cooperation between France and the United Arab Emirates in building the Musée du Louvre Abu Dhabi and for the express purpose of saving cultural heritage damaged and threatened by conflict. The Mosul Museum proved an exemplary case. ALIPH agreed to grant support; Musée du Louvre with its director Jean Luc Martinez agreed to join the Smithsonian in the project.

Before our Washington-based team traveled to Mosul, we decamped to rural Maryland to take training from former Special Forces operatives out in the field and in simulated settings so we would be prepared to handle emergencies. It was exhausting as we learned to avoid ambushes and gunfire; and harrowing as we practiced first aid responses to bombings and how to react to being taken hostage.

Flying into Erbil, we then traveled to Mosul in an armored car convoy, wearing protective helmets and vests and guarded by professionals with automatic weapons. As we drove to Mosul that first time, I couldn’t help but scan rooftops as we entered the city, expecting incoming mortar rounds at any moment.

Our team was led by the Smithsonian’s Cori Wegener, a former “monuments woman,” who served in the U.S. Army after the 2003 invasion of Iraq and helped save the Iraq National Museum in Baghdad. In addition to our Smithsonian group were Czech engineers from GEMA Art International we’d enlisted to examine the building’s structural damage. In Mosul we joined with our Iraqi colleagues—Ghazi and conservator Saad Ahmed, his museum staff and engineers from the nearby University of Mosul.

Over the course of several visits, we documented the damage in photographs and drawings, collected evidence of war crimes—like ordnance and expended gun shells, carefully examined the museum’s structural integrity, drainage and infrastructure. Damaged windows, skylights and portions of roof were repaired, doors and locks replaced. The most pressing and major project was to arrange scaffolding to prop up the floor of the Assyrian hall with its gaping 18-foot-long hole and gnarled steel-rod supports—created when ISIS detonated a bomb that destroyed an exhibited ancient carved royal platform.

Subsequent visits, coordination and financial support enabled the museum to repair its storage facility, build and equip a conservation lab, and begin recovery of damaged objects and sculpture. ALIPH director Valery Freland firmed up institutional arrangements. Musée du Louvre staff conducted an inventory of the collection and began conservation activities. Despite ISIS’ efforts, a good number of artifacts had been squirreled away; others in the museum survived pillage—notably two carved wooden cenotaphs of historical religious figures and several carved wooden mosque doors. This was all good news—fragmented sculptures could be restored.

The engineers concluded that the building was structurally sound and could be repaired. But much work would need to be done, modifying the building for proper drainage, repairing fire and bomb-damaged walls, floors and roof, and restoring power and completely replacing the HVAC system.

Political instability, elections and the coronavirus pandemic have slowed progress over the past year, but the staff, nonetheless cleaned up the building—with fragments from throughout the museum collected and systematically organized for the eventual restoration of artworks and artifacts. Both Musée du Louvre and Smithsonian have in the last few months developed digital training modules for the Mosul Museum staff. The partners also arranged to bring the World Monuments Fund—with its extensive experience and expertise into the project to coordinate the architectural, engineering and reconstruction work.

As we begin 2021, and hopefully emerge from the pandemic, we expect to regain momentum for the full renovation of the museum. Other major efforts continue in Mosul and at sites like Nimrud. The United Arab Emirates is funding, and UNESCO is leading a major project to restore Mosul’s Al-Nuri Grand Mosque, its iconic leaning minaret and two church complexes in the city. ALIPH is supporting an effort by the University of Pennsylvania working with Mosul University to restore the famed Mashki Gate at Nineveh, along with a visitor center. That team has already made considerable progress in restoring Mosul’s Tutunji House, an ornate late Ottoman, central courtyard mansion. Reclaiming heritage lost and damaged is not only a victory over the violent extremism that terrorized its populace but is also a key component of restoring the spirit and vitality of a society, signaling to all the value of knowledge over ignorance, understanding over intolerance.

As Ghazi notes, “we must not look to the future without looking back at the past—because in the past, the future hides.”

Restoring and reopening these historic and educational sites provides Mosul’s citizenry with cultural resources to craft their future and also, eventually, contribute to a revived economy, drawing interest, attracting visitors and fueling local commerce. That future is years away but is nonetheless conceivable and achievable given the proven resilience of our professional and committed colleagues in Iraq.