Smithsonian’s 175th anniversary exposition opens with big-name speakers, family fun and a 21st-century peek into the world ahead 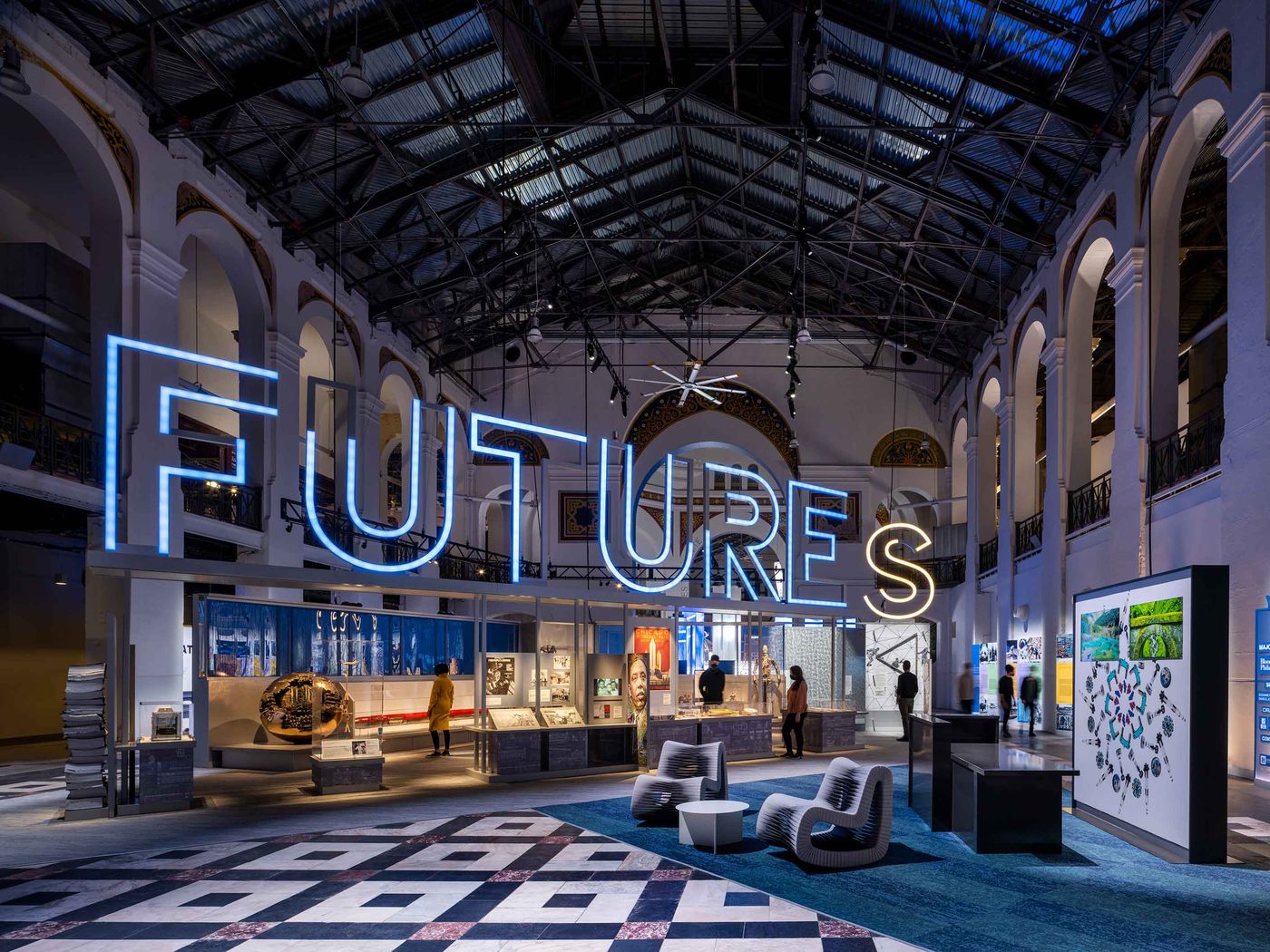 The much-lauded exposition-style celebration invites “all dreamers, makers, and changers of tomorrow to imagine a more exciting, equitable, and sustainable future.” AIB, courtesy of Ron Blunt

Retrofitted into the fanciful, much-admired 19th-century brick pavilion, America’s first museum building on the National Mall, a new Smithsonian exhibition presents dozens of sleek examples of what the 21st century and beyond may well bring. “Futures,” which opens Saturday in the storied and long-shuttered Arts and Industries Building, is at once the first major exhibition in nearly 20 years in the historic edifice and a celebration of the Smithsonian’s 175th anniversary year.

The much-lauded exposition-style celebration, which invites “all dreamers, makers, and changers of tomorrow to imagine a more exciting, equitable, and sustainable future,” begins in the historic past with the showcasing of artifacts and archival materials and contributory stories from each of the Smithsonian’s 21 museums and research centers. The entry portal includes examples of how visionary Americans of the past have imagined their future, leading visitors toward the building’s magnificent central skylit rotunda and its three other balconied galleries, where sleek prototypes and flashy examples of numerous newly unveiled inventions await.

“A huge amount of this content was created for this exhibition or adapted specifically for this exhibition,” says Rachel Goslins, director of the Arts and Industries Building, “so there’s many things you’ve never seen anywhere and won’t see anywhere else. It’s probably the only exhibition in the world where you can talk to an emotional robot, play a video game and do your laundry.” 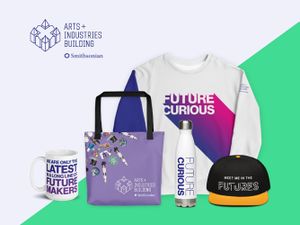 “Futures,” which will run for seven months on the Mall (before the building is closed again for further renovation) isn’t overwhelmed by huge video screens, incessant overlapping audio, or any other kind of media overload, electronic or otherwise. “We didn’t want it to look like Best Buy,” Goslins quips.

There’s a surprising calm to the presentation, a premium on hope and a willingness to draw in visitors by listening to what they have to say. Indeed, the centerpiece in the rotunda is artist Succi Reddy’s elegant, two-story tower me + you, which solicits spoken one-word visions of what the future may hold from visitors. The installation analyzes visitors’ input with artificial intelligence (A.I.), reflecting the prevailing mood in a kinetic mandala of color and light.

The two-story sculpture is a kind of “Emotional A.I.,” blending data technology, neuroscience and physics of A.I. in the first major art commission from Amazon Web Services. (It will later be installed at part of the $2.5 billion Amazon headquarters facility set to open in nearby Arlington, Virginia, in 2023).

Corporate tie-ins aren’t shouted in the exhibition; there’s none of the kind of branding and hard sell found at even the most benign of world fairs. There isn’t even a gift shop (though vending machines are in the plan, and the online merch drop “Shop The Futures” offers an array of fashion-forward designs).

But the public debut of Virgin Hyperloop’s 670 miles per hour, hyperspeed public transportation solution, known the Pegasus XP-2 pod, does have the logo of Richard Branson’s celebrated company.

The most commanding piece, the five-seat Bell Nexus “Air Taxi,” dubbed a flying car, looks for all the world like one of the company’s modern helicopters. Visitors can make keen comparisons to the historic, more compact 1960 Bell Aerospace Company Rocket Belt, a jet pack that allowed a Buck Rogers–style jet propulsion liftoff.

Amid the robots and automations invented to streamline things from agriculture to healthcare stand a half-dozen commissioned artworks. The installations are led by Korean American artist Soo Sunny Park’s three-story sculpture Expanded Present at the building’s front door. Its panes of dichroic glass look different at every angle and time of day. The presence of artists among scientists not only fulfills the name of the building but also curators’ aim to humanize the future while bringing underrepresented voices into the conversation.

A touch of the kind of Hollywood that has made Judy Garland’s ruby slippers a top Smithsonian attraction is found in the cool leather costumes from Marvel Studios’ latest blockbuster, Eternals. They’ll inspire context and comparisons to real-life cutting-edge spacesuits, like the robotic exoskeletons from Harvard University’s Biodesign Lab and MIT professor Dava Newman’s “second skin” spacesuit, which supports greater freedom of movement for every body type.

Divided into four sections—Futures That Unite, Futures That Inspire, Futures That Work and Futures Past—each of the building’s cloisters is heralded by 12-foot-tall digital “Futures Beacons” that invite visitors to respond about what kind of future they’d like to achieve. Instead of touchscreens, the beacons are operated by waving a hand—movement much like touchless restroom fixtures. The day’s replies are compiled and reported back on big screens at the exit; specific visitor information is not collected or kept.

One holographic portal with cheery title, Hi, How Are You, was developed by an artists’ collective that will eventually connect with people in Doha, Qatar. It comes with a stern legal disclaimer that may also be a harbinger of the future: “By agreeing to record your message, you give the Smithsonian and those individuals and entities authorized by the Smithsonian the irrevocable, perpetual, fully paid up, royalty-free, worldwide right to use the recording or any portion thereof.”

The history of past World’s Fairs, which similarly showcased brand new inventions and concepts to rapt audiences, are told through buttons, posters, coins and other souvenirs, succeeding in making a crucial connection in solving the seeming dichotomy of the 1881 Arts and Industries Building and this foray into the future—something the building has always done historically, Goslins reminds us.

“It was the place where the Smithsonian showed its most exciting treasures, everything from the Star-Spangled Banner and inaugural ball gowns to the Spirit of St. Louis and the Apollo 11 landing capsules and literally a rock from the moon two months after astronauts landed,” she says.

Some of those past milestones are recorded in “Futures,” from the experimental telephone of Alexander Graham Bell to Samuel F. B. Morse’s telegraph key, as well as patent models for the locomotive, elevator and a school chair.

The building has had a number of nicknames over the years, from the Palace of Inventions to the Mother of Museums. (It housed the collections that would one day leave for their own new Smithsonian museums on the Mall.) But Goslins’ favorite old nickname for the building is the Brick Tent. “Because that’s what it is,” she says. “It’s like a circus tent in brick, or one of the great world’s fair pavilions which the architecture was modeled after. This building was actually built, in part, from the ticket proceeds from the 1876 Philadelphia Centennial.”

David Rockwell, the architect who designed the exhibition with his firm Rockwell Group, calls the Arts and Industries building “a glorious unicorn on the Smithsonian campus,” the epitome of modern design with its open layout, natural ventilation and plentiful daylight. It opened in 1881 with an inaugural ball for President James A. Garfield. The city’s first electric lightbulb shone nine months after its patent, and John Philip Sousa conducted the event’s music.

“It should come as no surprise that, for most of its life, this building was the preeminent showcase and incubator for America’s biggest ideas,” Rockwell says. “Now we have the chance to extend that rich legacy to the future that 'Futures' brings us today.”

The future of Smithsonian exhibitions is wryly reflected in a series of posters purporting a series of openings in 2071. “It may seem like a long way away,” wall text says. “But we’re closer to 2071 now than we are to the Woodstock music festival or the moon landing.”

Sustainability and the climate loom large within the exhibition, perhaps no more so than in the washing machine setup whose wastewater is used to help grow a garden of wetland plants in an adjoining tank. Australian artist and environmental engineer Tega Brain titled the piece An Ecosystem on Rinse Cycle, and Goslins says yes, visitors can actually bring their laundry to test it out. “We don’t have a dryer, so they might have to bring home their wet clothes,” she says.

Some of the art commissioned by the curators uses virtual reality (V.R.) technology to spark the imagination. The work by new-media artists Tamiko Thiel and /p, A Whole New World, allows visitors to view the museum through their smart phones (or a few available iPads) and witness the surroundings with imagined flowers and insects that could blossom in the Arts + Industries Building.

“Rewilding the city is what we want to do,” says artist /p, who traveled from Munich with Thiel to create the installation.

As sunny as the future may seem in many of the show’s displays, some solemnity peeks through, as in the Capsula Mundi by Anna Citelli and Raoul Bretzel, which suggests replacing a coffin with a biodegradable, pod-shaped capsule that could then nourish a young tree.

Among the futuristic foodstuffs, meanwhile, curators exhibit a line of goods from Soylent, a real-world company that doesn’t mind the association with the similarly named food in the fictional 1973 dystopian film.

Covid’s spread during the three years of planning meant not only that curators and staffers had, in many cases, only met face-to-face recently, but also that planned touchscreens made way for voice- and motion-activated kiosks. “It made our exhibition even more future-forward because we were leaning into very, very cutting edge technology,” Goslins says.

“Futures” is not just an exhibition but a festival, with a wide array of opening-weekend events that, among others, include a livestreamed walkthrough with Bill Nye the “Science Guy” and an opening eve series of livestreamed conversations with Nye, Smithsonian Secretary Lonnie Bunch, actor Kal Penn, environmental advocate drag queen Pattie Gonia, co-executive director of the HBO Max series “Legendary” Jack Mizrahi and 2021 National Spelling Bee champ Zaila Avant-garde.

Futures, on view through July 2022 at the Smithsonian’s Arts and Industries Building, will be open to visitors Sunday, Monday, Wednesday and Thursday 10 a.m. to 5:30 p.m.; and Friday and Saturday 10 a.m. to 7 p.m. Admission is free with no timed tickets currently required.