In 2015, after a lifetime spent observing birds around the world, I decided to take a road trip up the Mississippi Valley to the Great North Woods to experience spring migration. . . . I would first meet the migrant birds on the coast of Texas after they had made their journey across the Gulf of Mexico, returning stateside from their tropical wintering grounds. Then, tracking spring’s march up through the continent, I would follow the migrants as they moved northward in fits and starts. I would meet these birds at an array of favored stopover sites and midcountry nesting spots from Texas to Canada, and I’d seek out the most peripatetic of the migrants on their nesting territories in the boreal forests of northern Ontario and high in the Adirondack Mountains of northern New York State.

I planned to focus my hundred-day birding excursion on the wood warblers. These brightly patterned songbirds constitute the heart of the continent’s avian migratory system, and their well-being is a bellwether for the health of other bird species and of the land itself. Thirty-seven species of wood warblers breed in eastern North America, and I wanted to search out and observe each in its breeding habitat.

Mad Island in southeast Texas is the southernmost banding project for Neotropical migrants approaching the United States. By the time of my arrival, the Mad Island team had documented a couple dozen species of Neotropical songbird migrants—including Indigo Bunting, Blue Grosbeak, and Hooded, Kentucky, and Swainson’s Warblers—dropping into its little patches of coastal scrub woodland. Amid the scrub, the researchers had strung mist nets: 40-foot-long black nylon nets spread tautly between two poles. The mist nets act like large spider webs, harmlessly entangling unsuspecting birds who fly into them without ever seeing them.

At Mad Island, the first bird netted this morning was a Nashville Warbler. Tim Guida carefully banded and measured it, a process that took about five minutes. Done, he extended his arm with his hand lightly enclosing the small yellow, olive and gray bird, then slowly opened his fingers. The warbler lay on its back for a couple of seconds before sensing its freedom. It quickly flicked its wings and darted off to a low bush a few paces from the banding tent. It preened for a few moments, collected itself, and flew strongly over the canopy of the scrub and out of sight, its aluminum band glinting in the sunlight. The Nashville Warbler is a boreal forest breeder on its way not to Tennessee (despite its name) but up the Mississippi Valley to the North Woods. This bird, and millions like it, would be preceding me northward in the weeks to come.

Like Mad Island, High Island [near Galveston] is not a true island surrounded by water. Instead it’s a small wooded rise ringed by marshlands, its uplands beloved by birders for the oak woodlands that lure passing songbird migrants in spring. The songbirds arrive at High Island after their overwater crossing and descend into the community’s woodlots to feed, drink, bathe and regroup. Winding sylvan trails in the small reserves allow birders to approach these normally elusive birds up close.

High Island is diminutive and its woodland reserves are tiny as well, yet they can attract remarkable concentrations of songbirds. The community features five private woodland sanctuaries owned and operated by the Houston Audubon Society and the Texas Ornithological Society, each of which offers critical food and shelter to migrating birds on their way north. They are the focus of an annual springtime pilgrimage by birders from all over North America, who come in hopes of seeing a songbird fall-out.

Whereas the Mad Island coastal woods attract both trans-Gulf migrants and those traveling north along the eastern coastline of Mexico, most songbirds arriving at High Island have flown over the Gulf. Many of them depart from the Yucatán Peninsula in southeastern Mexico, about 600 miles south-southeast of High Island. Some have already flown there from Amazonia, Colombia and various parts of Central America, journeying in jumps that in some places required them to travel over the Caribbean. On the Yucatán, the migrants feed, rest and wait for benign southerly winds and fair skies—conditions favorable for a flight north over water.

In the oak woods, crisscrossed with winding and shadowy trails at High Island's Smith Oaks Sanctuary, we observed 15 species of passage migrant wood warblers. . . over a 90-minute period. A black-and-white Warbler crept up a sloping branch, acting like a nuthatch. Below it, an Ovenbird searched fallen leaves on the ground for insect prey. High in the leafy branches of a big old live oak crept several warblers—a Northern Parula (diminutive but colorful), a Black-throated Green Warbler (with a black throat patch and yellow face), a Blackburnian Warbler (with a deep-orange throat that seemed to glow), and a male Blackpoll Warbler (patterned a bit like a chickadee, but with yellow legs). Seeing the warblers as they foraged high in the leaves was no easy task.

From the Gulf Coast, my path leads me north into the interior bottomlands of Louisiana and Mississippi, with their mix of hardwood swamp forest, river oxbows, row-crop agriculture, and the tiny old towns of the lower Mississippi. The ecologically rich, junglelike forests of the Mississippi Delta are the places that Gulf-crossing migrant warblers hurry to reach after their brief stopovers in the coastal cheniers.

The Tunica Hills of Mississippi are perfect wood warbler breeding habitat: well-watered foothills with tall forest graced with a rich green understory. From bottom to top, this mature forest provides a lush breeding environment for warblers. Nestled in these hills, Clark’s Creek Natural Area is almost impossibly difficult to locate but well worth the effort. With deep, shaded glens filled with tall oaks, beeches, hickories and ashes, it reminded me of the woods around Great Falls, Virginia. Spring butterflies—the Questionmark, the Zebra Swallowtail, the Giant Swallowtail—fluttered in the tree openings, and Summer Tanagers and Yellow-throated Vireos sang. Here I located four more quest birds on their breeding habitat: the Louisiana Waterthrush and Worm-eating, Hooded, and Black-and-white Warblers.

I spent a day and a half birding and naturizing in Mississippi’s Delta National Forest. The access road cut through a fine stand of secondary forest about a half-mile in extent, through which I biked to a wooded swampland just to the north. A very wary red fox—not one of those tame residential creatures I knew from home—skittered across the road in front of me. At the forest’s wetland, Mississippi Kites played about in the sky over the prime swamp habitat. Back at the parking-lot campsite, by the stand of old trees, I heard Prothonotary Warbler, Kentucky Warbler, Acadian Flycatcher, Veery and Wood Thrush.

Wyalusing State Park perches atop a high bluff looking down on the deep valleys of the Wisconsin and Mississippi rivers, whose confluence lies just west of the park. I settled into a campsite set a bit back from the bluff and in the lee of the winds striking the northern face of the escarpment. As I erected my tent, I was greeted by the songs of Rose-breasted Grosbeak, Wood Thrush, and Tennessee Warbler. A female American Redstart gamboled about the campsite no more than a few feet off the ground, and a male Cerulean Warbler sang repeatedly in the forest canopy just above the picnic table. The birdsong was welcoming, but the approaching chilly weather was not. 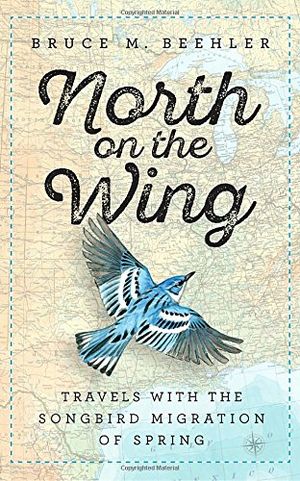 North on the Wing: Travels with the Songbird Migration of Spring

In late March 2015, ornithologist Bruce M. Beehler set off on a solo four-month trek to track songbird migration and the northward progress of spring through America. Traveling via car, canoe, and bike and on foot, Beehler followed woodland warblers and other Neotropical songbird species from the southern border of Texas, where the birds first arrive after their winter sojourns in South America and the Caribbean, northward through the Mississippi drainage to its headwaters in Minnesota and onward to their nesting grounds in the north woods of Ontario.

While camped in Ontario, I had searched eBird online for late-spring sightings of Cape May Warblers—one species that had, to date, eluded me. I found one recent record of the species from Luzerne. Remarkably, that eBird record had been uploaded by. . .Ethan Gyllenhaal. . .Gyllenhaal had located several singing male Cape Mays on territory in conifers at [Nathan] Cooper’s rental house as well as at the nearby Luzerne Boardwalk. The Cape May Warbler was a species that had remained just out of reach throughout my trip. . . In my tent by 10 p.m., I drowsed to the sound of a drumming Ruffed Grouse and dreamed of the two rare warblers that awaited me in nearby habitat.

The last stage of this story of migrant songbirds takes place in the Adirondacks. […] The last place I visited harkened back to my past. It was fine to end my journey in the Adirondacks—as wild and beautiful as it had been when I spent my first summer there as a 12-year-old.

Bruce M. Beehler is an ornithologist, naturalist, conservationist, author and lecturer. As a research associate in the division of birds at the Smithsonian's National Museum of Natural History, he organized a series of biodiversity surveys of the Foja Mountains in Indonesia New Guinea from 2005 to 2008. Beehler has published 11 books and monographs, most recently Birds of New Guinea: Distribution, Taxonomy, and Systematics.