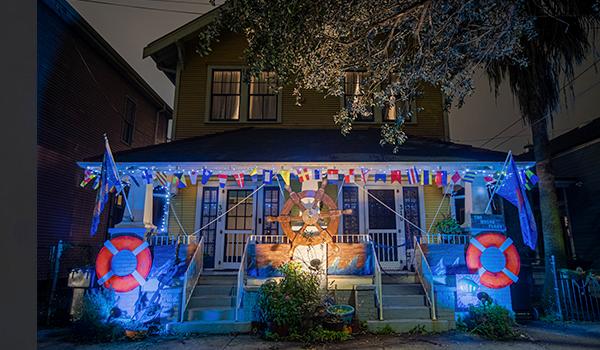 Under normal circumstances, New Orleans’ Mardi Gras celebrations are veritable bacchanals filled with throngs of people throwing gold, green and purple beads from ornately decorated parade floats. Amid a global pandemic, however, pressing against crowds of strangers is a more frightening than festive prospect.

Writing on Twitter, Boudreaux joked, “We’re doing this. Turn your house into a float and throw all the beads from your attic at your neighbors walking by.”

As Carnival—the “period of feasting and fun” between the Feast of the Epiphany on January 6 and Fat Tuesday, per the official New Orleans Mardi Gras website—drew closer, Boudreaux began considering her suggestion more seriously. She decided to form her own krewe, or Mardi Gras social group, on Facebook; only expecting a few close friends and neighbors to join, she soon saw the so-called Krewe of House Floats’ numbers skyrocket to 12,500 members, some of whom live as far away as England, Australia and Dubai.

According to the AP, group members are asked to decorate their houses at least two weeks prior to Fat Tuesday, which falls on February 16 this year. Organizers hope that this schedule will encourage people to space out their visits and practice social distancing while admiring neighbors’ floats.

“I didn’t think I was starting a Mardi Gras krewe [but] here I am,” Boudreaux tells the AP. “I’ve got myself a second full-time job.”

Dubbed “admiral” of the fleet, Boudreaux plans to decorate her own house as the “USS House Float,” notes Victoria Stapley-Brown for Atlas Obscura.

Carnival artists who found themselves out of work when the parades were canceled are stepping in to help locals who are less creatively inclined but would still like to participate in the festivities. Launched by the Krewe of Red Beans at the suggestion of Caroline Thomas, an artist who typically decorates floats for the Krewe of Rex and the Krewe of Proteus, the Hire a Mardi Gras Artist initiative has already “put about 40 people to work, which is nice,” team member Devin De Wulf tells the AP.

Many of the house floats contain nods to local culture or homeowners’ lives. “Acadiana Hay Ride,” for instance, features an accordion Thomas crafted for a couple who met at a music festival, per Atlas Obscura. The house is outfitted with colorful sculptures of music notes, horses and revelers. Other floats, like “The Queen’s Jubilee,” are embellished with pearls and purple flowers.

New Orleans isn’t the only city set to celebrate Mardi Gras with house floats. Cities including Lafayette, Louisiana, and Galveston, Texas, have similar events scheduled, reports ABC11, and many out-of-state “expats” in the Krewe of House Floats Facebook group are planning to decorate their individual homes.

Since 1857, when New Orleans’ Mardi Gras celebrations first got underway, Carnival parades have been canceled a total of 14 times, according to Katherine Jolliff Dunn and Emily Perkins of the Historic New Orleans Collection. Reasons for cancellations ranged from the Civil War to an 1879 yellow fever outbreak, the 1918 influenza pandemic, World War II and a 1979 police union strike.

“I want to very clear [that] Mardi Gras 2021 is not canceled,” Mayor LaToya Cantrell’s communications director, Beau Tidwell, told reporters last November, as quoted by CNN. “It is going to look different.”

Outside of the Krewe of House Floats, socially distanced alternatives to the city’s usual festivities include the Krewe of Bacchus’ app, which allows users to catch, collect and exchange virtual knick-knacks; scavenger hunts; a drive-by live performance by the Krewe de Jeanne d’Arc; and a Mardi Gras for All Y’all online spectacular.