Just in time for Veterans Day, a recently published book by historian Douglas Keeney hopes to encourage readers to visit the many museums and historic locations that tell the long and complicated story of America at war. The Top 100 Military Sites in America, as the book is titled, lists destinations in more than 40 states, from cemeteries, to secret bunkers, to desolate nuclear test sites.

These locations cover the breadth of United States history, starting with the Museum of the American Revolution in Philadelphia and extending to exhibitions on the war on terror at institutions like the National Museum of the U.S. Navy in Washington, D.C. Some of Keeney’s selections are well-known, among them the Arlington National Cemetery and the Smithsonian National Air and Space Museum, but much of the book is focused on more obscure locations that reveal hidden wartime histories. 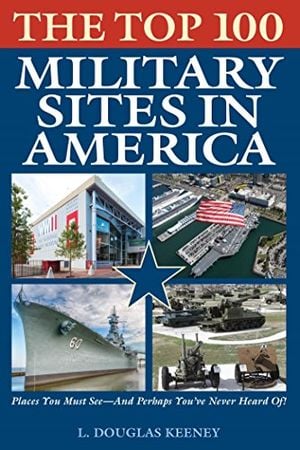 The Top 100 Military Sites in America

Did you know that the Coast Guard mounted a rescue effort on 9.11 and evacuated more than 100,000 New Yorkers from Manhattan by boat? Go to the little-known Naval Air Station Wildwood Museum in Cape May, New Jersey to discover that story. How about the remnants of the helicopter from Blackhawk Down or the lifeboat from Captain Phillips – or even the Airbus pulled from the Hudson River that was piloted by Sully Sullenberger? We’ll tell you where to go to find all of these objects -- and many, many more.

Keeney recommends, for instance, the First Division Museum at Cantigny Park, Illinois, which is devoted to the “Big Red One”—the first unit of the American Army to deploy during WWI. Another intriguing location is the Historic Wendover Airfield in Utah, a WWII air base that is still surrounded by original buildings from the period. It was here that the crew of the Enola Gay, the B-29 bomber that dropped an atomic bomb on Hiroshima, was trained to carry the deadly weapon. In the beach town of Nahant, Massachusetts, you can spot two fire control towers that were built by the military during WWII to keep watch for encroaching German invaders.

Also on Keeney’s list are many destinations connected to the Cold War, like the Nike Missile Site Summit in Alaska, which was once part of an anti-aircraft defense system established to shoot down Soviet bombers. There are Nike sites sprinkled throughout the country—the book also lists locations in New Jersey, Florida and California—but the ones in Alaska are particularly important because the state was the first stop for Russian bombers on their way to the Lower 48. At Site Summit, which sits on a mountaintop in the Arctic Valley, visitors can still see missile boosters and above-ground bunkers.

Per Keeney’s suggestion, you can tour the declassified Greenbrier Bunker in West Virginia, once a top-secret fallout shelter for U.S. officials, who would “govern a radiation-soaked, post-WWIII nation,” Keeney writes in the book. “Lucky them.” He also recommends the U.S. Army Field Artillery Museum in Fort Sill, Oklahoma, where you can spot “Atomic Annie,” the first and only cannon to ever fire a nuclear shell.

For more recent history, Keeney suggests stopping by the Naval Air Station Wildwood Museum in Cape May, New Jersey, which includes a special exhibition on the Coast Guard’s efforts to evacuate 300,000 people from Manhattan on 9/11.

When putting together his list of 100 military destinations, Keeney relied on his own travel experiences, along with recommendations from historians, researchers, soldiers on active duty and friends, he writes in the introduction to his book. He wanted his list to reflect not only the glory and heroism of war, but also its devastating realities. “[S]oldiers sacrificed,” Keeney notes, “war is dirty.”

It was also important to Keeney to include military destinations in as many states as possible, so people across the country could use his book as a guide. “In truth, it was easy,” he writes. “There are an amazing number of places where you can reflect on the accomplishments of our soldiers.”