These Anti-Suffrage Postcards Warned Against Giving Women the Vote

There are always those who resist societal change 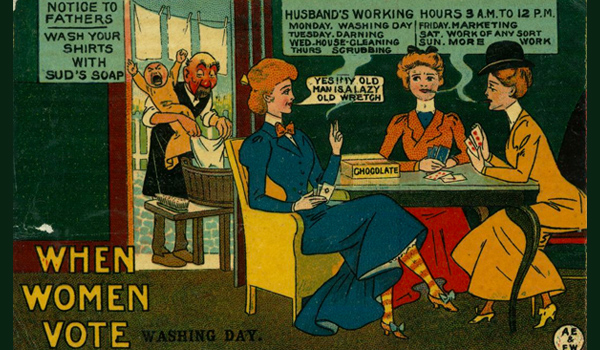 While modern political arguments take place on social media sites, it wasn’t all that long ago that suffragists and anti-suffrage activists alike took to the easily sharable medium of their day to get their message heard: the postcard.

The picture postcard was invented in the late 19th century. As British and American women began organizing in support of women’s suffrage, demanding to be given equal say in how their countries should be run, the postcard was quickly seized as a medium for the fight over their right to vote, Julie Zeilinger reports for the Huffington Post.

While pro-suffrage organizations and some commercial postcard publishers produced postcards that advocated for the women’s right to vote, many American and British commercial publishers created their own propaganda against the movement in their postcard sets.

“Most of these sets took on an anti-suffrage and, at times, somewhat bemused attitude to the issue, although positive statements do certainly appear with some regularity,” Kenneth Florey, author of American Woman Suffrage Postcards: a Study and Catalog, writes. “These cards often showed a topsy-turvy world, and the resultant chaos once women achieved power and husbands were forced to do the housekeeping and child raising.”

Many anti-suffrage postcards from the time depict men performing what were then considered women’s roles in the house, like cooking, cleaning and caring for their children while their wives went out on the town. Others depicted suffrage advocates as domineering, abusive and physically ugly women who couldn’t get a husband any other way than by trying to overthrow society, Maria Popova writes for Brain Pickings. But while many American anti-suffrage postcards also depicted suffragists as generally misinformed and confused, their British counterparts, known as suffragettes, could be much more violent.*

“Often suffragettes in English cards are not simply plain, they are grotesque, the implication being that their ugliness and their ideology are interrelated,” Florey writes. “Clearly the assumption of these cards is that normal women marry and settle into ‘traditional’ roles; the suffragette is not normal, she is a genderless creature whose beliefs and appearance set her outside the general order. But she is frightening and dangerous at times.”

Of course, the fear mongering campaign ultimately failed. In 1920, the 19th Amendment gave American women the same voting rights as men, and in 1928, the Equal Franchise Act gave UK women full suffrage as well. The postcards remain around today, a footnote to the obstacles and prejudices around, which predicted a total societal collapse should women to be given equal say in how their countries should be run.

*Editor's Note, July 20, 2020: This article has been updated to distinguish between suffragists (as American suffrage advocates preferred to be called) and suffragettes (an initially derogatory name that referred to their more militant British counterparts).

Danny Lewis is a multimedia journalist working in print, radio, and illustration. He focuses on stories with a health/science bent and has reported some of his favorite pieces from the prow of a canoe. Danny is based in Brooklyn, NY.