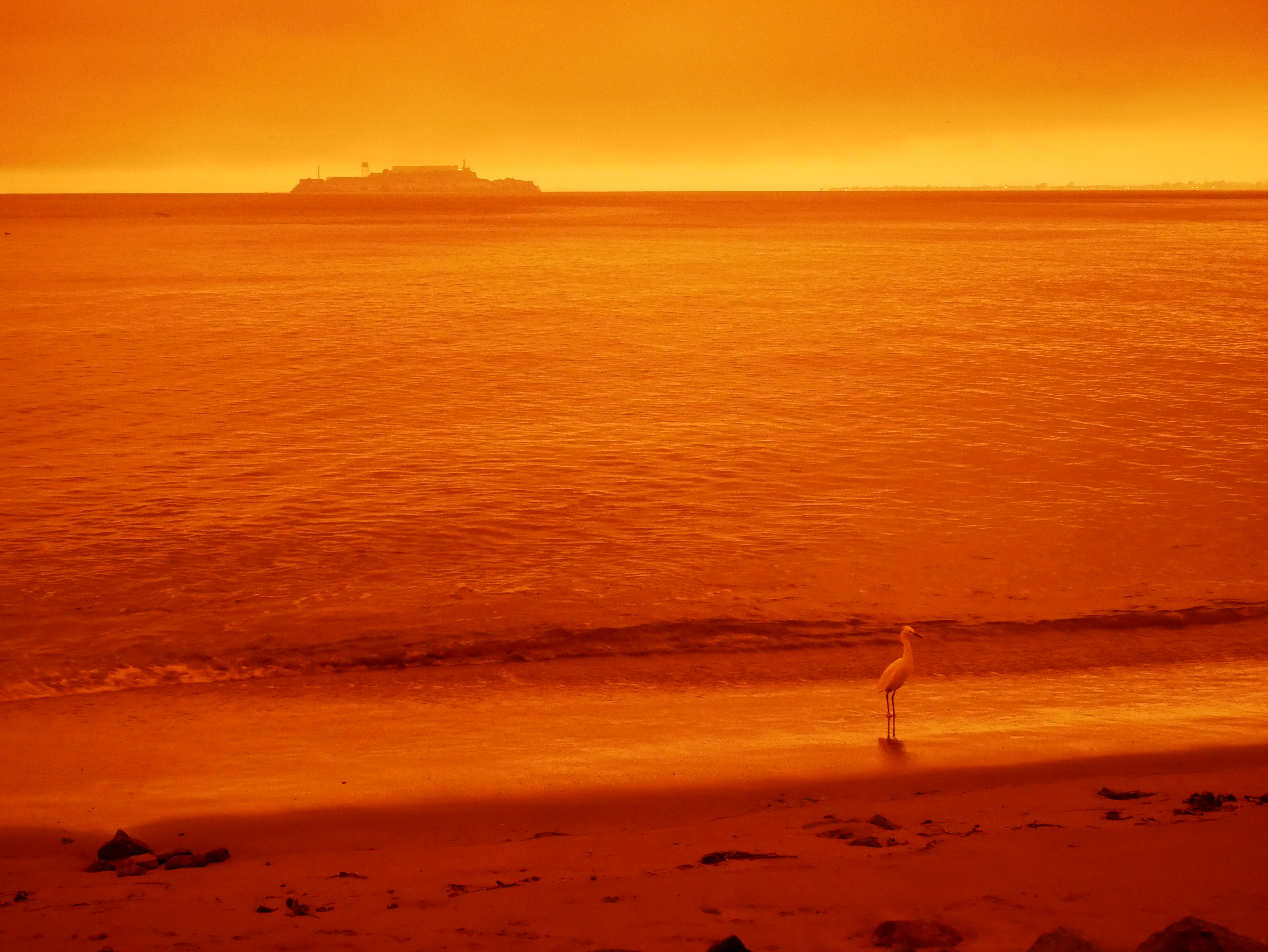 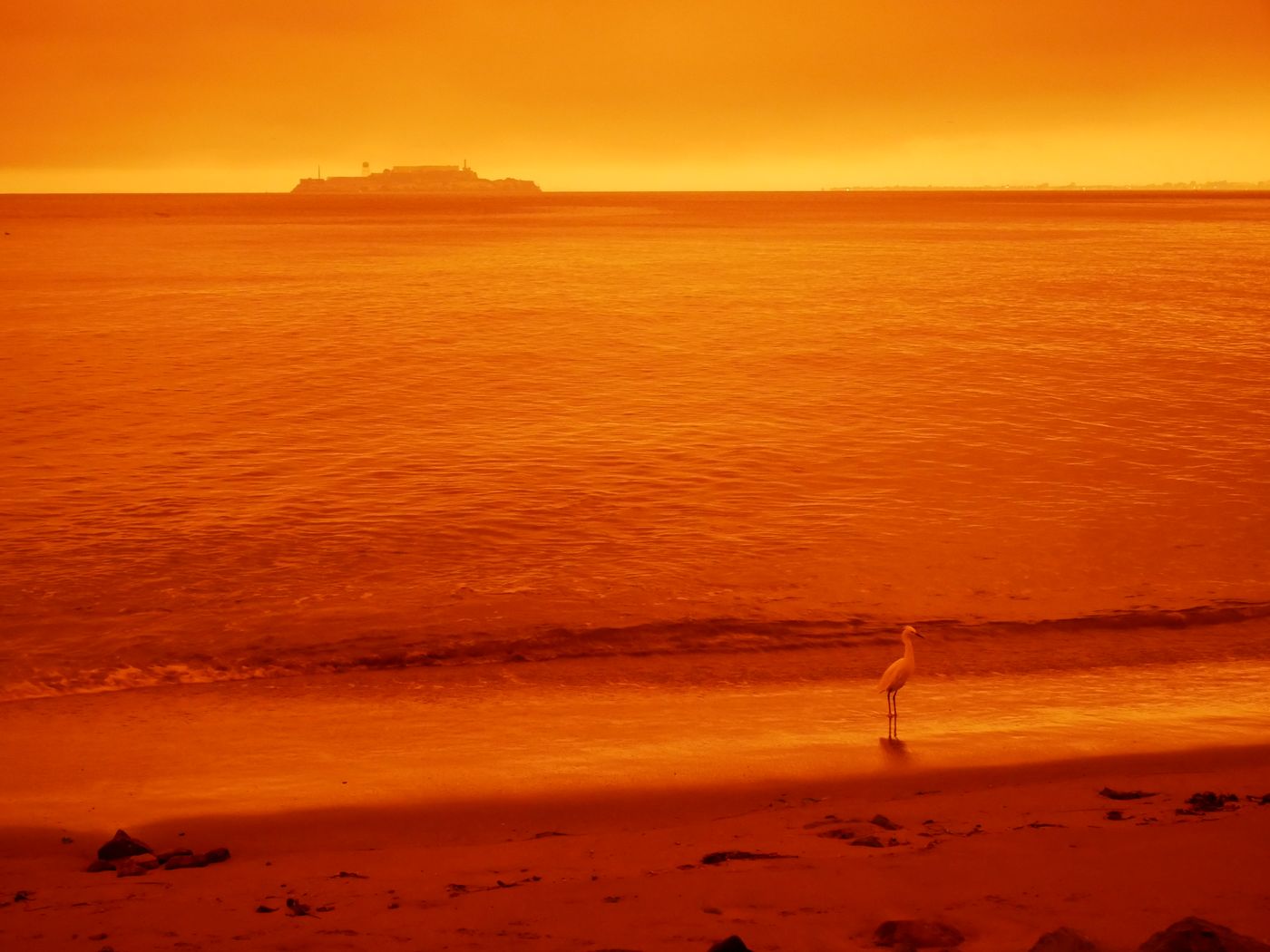 View of shore at Crissy Field in San Francisco, Alcatraz in the distance. Natalie Grant via Twitter

Many in California’s Bay Area woke up wondering whether they were on the right planet this week as smoke blotted out the sun and turned the sky a Martian shade of rusty orange. Even at mid-morning on Wednesday the sun remained invisible, leaving the world glowing ominously and prompting cars to keep their headlights on all day, report Steve Rubenstein and Michael Cabanatuan for the San Francisco Chronicle.

Across the state, and even to the north in Oregon and Washington, more than 20 major fires are scorching the landscape, incinerating homes and shrouding the American West in smoke. At least 2.5 million acres have burned in California so far this year, breaking the previous record set in 2018 and exceeding last year’s total 20 times over, report Nico Savidge and Rick Hurd for the San Jose Mercury News.

All those fires are producing so much smoke that it’s actually changing weather patterns in the Bay Area and Northern California. Weather models predicted temperatures in the mid-80 degrees Fahrenheit for the region but the thick layer of smoke mixed with fog kept things cooler by preventing much of the sun’s warmth from reaching the ground.

“We have more large fires surrounding the Bay Area than we’ve ever had,” Craig Clements, director of the Fire Weather Research Laboratory at San Jose State University, tells the Mercury News. Clements describes the cooling effect, known as smoke shading, produced by the ashen veil as “kind of like nuclear winter.”

As for the orange color, KQED’s Kevin Stark explains, “smoke particles scatter blue light, so only yellow, orange and red light reach through, which is what's causing the sky's peculiar tinge right now.”

Jan Null, a meteorologist with Golden Gate Weather Services, tells KQED the otherworldly hue may stick around for a few days. "We're not really looking at a good sea breeze that's going to help clear out the lower levels," he says. "Until some of these bigger fires are contained—or we see a significant wind shift aloft—we're going to wake up to these yellow mornings."

To the confusion of many, the ochre skies were not immediately accompanied by the smell of smoke. The Bay Area’s foggy, cool marine layer actually kept the smoke from settling down near human noses.

“The fog layer is between us and the smoke. That’s why you’re seeing an orange glow,” Bay Area Air Quality Management District spokeswoman Tina Landis tells the Mercury News. “That’s also keeping the air quality levels lower to the ground at a low level.”

But on Thursday, as the skies returned to a more familiar gray, the air quality worsened, reports Alix Martichoux for local broadcast station ABC 7 News. The network’s meteorologist Mike Nicco says San Francisco and Marin counties both had very unhealthy air this morning.

With so many fires burning, California’s record setting fire season is likely to entail more days of orange skies and smoke-filled air to come. “Until we are able to get these fires put under control and turn off that smoke generation,” National Weather Service meteorologist Roger Gass tells the Mercury News, “we are going to continue to have ebb and flows of smoky and hazy conditions into the foreseeable future.”

The acreage torched by California’s fires is already unprecedented but fire experts say the fires’ behavior has also taken a turn. Drought and warming temperatures caused by climate change have made fire behavior more extreme in the region, fire experts tell Don Thompson of the Associated Press.

“We have seen multiple fires expand by tens of thousands of acres in a matter of hours, and 30 years or more ago that just wasn’t fire behavior that we saw,” Jacob Bendix, an environmental scientist at Syracuse University who studies wildfires, tells the AP.

University of Utah fire expert Philip Dennison tells the AP that “fires in California are moving faster and growing larger” because of the hotter climate, lengthening fire season and a glut of some 140 million dead trees killed during the state’s five year drought.

This year’s blazing fires and scorching heat are symptoms of a 50-year trend that is accelerating due to climate change, Park Williams, a climatologist at Columbia University, tells the AP. “While the magnitudes of the current heat wave and the resultant wildfires have been shocking, they’re consistent with what scientists have been predicting for decades.”