Inside Hieronymus Bosch’s Surreal Visions of Heaven and Hell 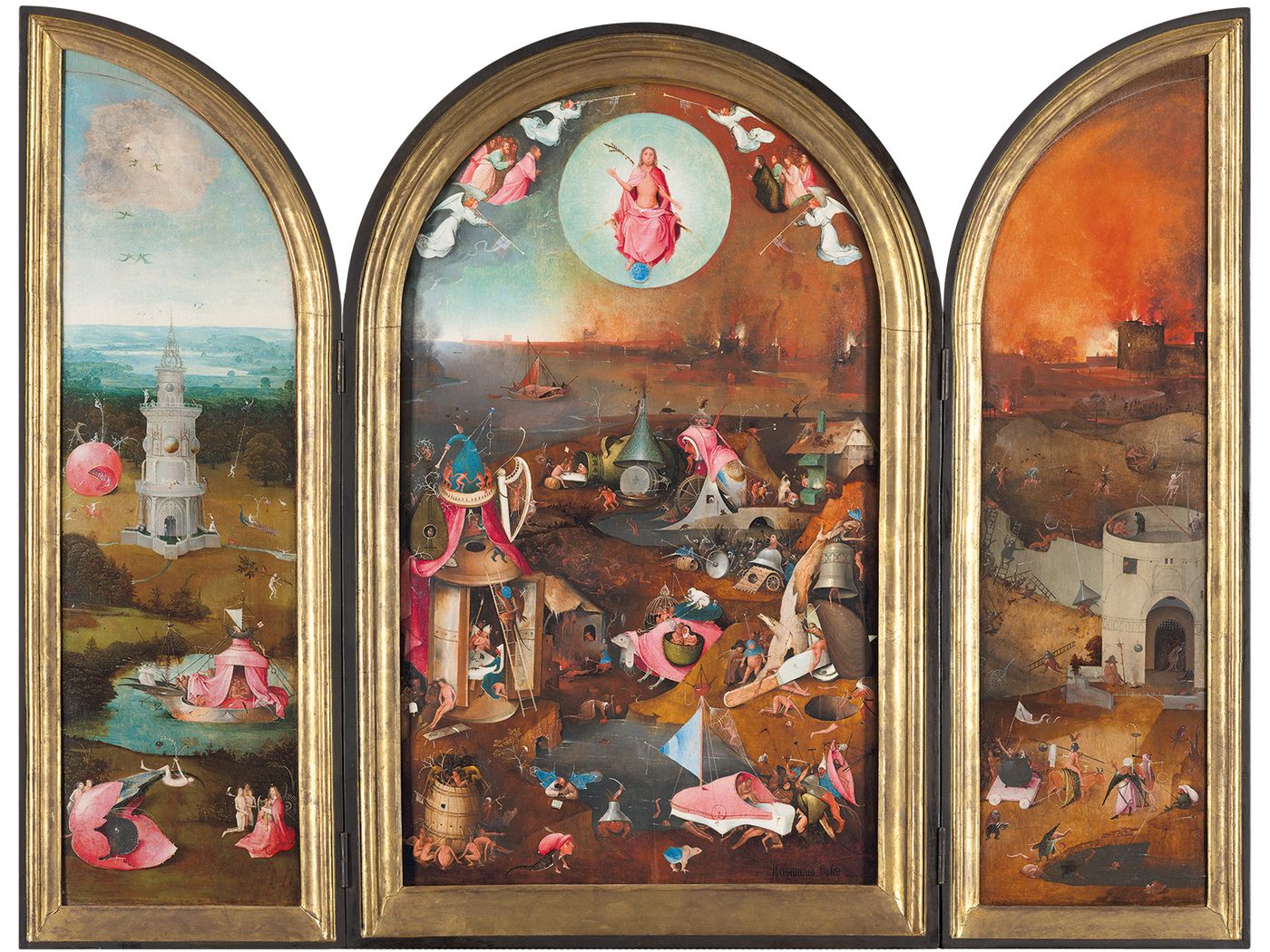 In Hieronymus Bosch’s visions of hell, Satan and his followers subject sinners to an endless parade of punishments. A hare captures a former hunter, trussing him up to a pole as a pair of hunting dogs maul a man nearby. A gambler has his hand impaled on a table as a furry creature closes its paw around his neck. Yet another sinner is crucified on an enormous harp about to be plucked by a demon whose body resembles a tree.

These chaotic scenes and others like them have cemented Bosch’s status as “one of [a] handful of truly original creators of hell,” writes Alice K. Turner in The History of Hell. Painted in the late 15th and early 16th centuries, the Dutch artist’s hellscapes are both warnings for Christians hoping to avoid an afterlife of eternal pain and visually sumptuous feats of imagination.

Six years after Bosch’s hometown of ‘s-Hertogenbosch hosted the largest-ever retrospective of his work, a smaller yet similarly ambitious exhibition is making its debut at the Museum of Fine Arts, Budapest (MFAB) in Hungary. “Between Hell and Paradise: The Enigmatic World of Hieronymus Bosch” features almost 90 works by the Old Master and his peers. According to a statement, it’s the “most comprehensive exhibition” of the artist’s works ever held in Central Europe, and includes nearly half of the handful of paintings—just 25 in total—attributed to him.

Highlights of “Hell and Paradise” include the Musea Brugge’s Last Judgment triptych, the Louvre’s Ship of Fools, the Metropolitan Museum of Art’s Adoration of the Magi and the Städel Museum’s Ecce Homo. These masterpieces are placed in conversation with works that inspired Bosch and vice versa. Each of the show’s seven sections discusses a different aspect of the painter’s life and work, from the religious views that shaped his art to his evolving legacy.

“The exhibition explores eternal human themes rendered by Bosch in an utterly original pictorial language: the choice between virtue and vice, the questions of faith and truth, experiencing unfettered desires and mastering them, as well as the spiritual quality of human existence,” notes the museum on its website.

Bosch himself is a man mired in mystery. Born into a family of painters between 1450 and 1456, he likely witnessed a devastating fire in his hometown during his youth. The disaster may have “influenced Bosch’s later works, some of which include blazes raging in their backgrounds,” wrote Claire Selvin for ARTnews in 2020.

In the early 1480s, Bosch wed a wealthy woman whose family money enabled him to pursue a career as an artist. Initially, he painted fairly traditional religious scenes, like Crucifixion With a Donor, but as his stature grew over the next decade or so, he shifted gears to the apocalyptic landscapes he’s known for today. Bosch died in ‘s-Hertogenbosch in 1516 after spending the majority of his life in his hometown.

Unsettling and bizarre (they directly influenced the 20th-century Surrealists), these works shaped conceptions of hell during the Renaissance and for centuries after. In the MFAB show, a mid-16th-century tapestry version of The Garden of Earthly Delights—arguably Bosch’s most well-known painting—testifies to his art’s appeal around the time of its creation.

“No other artist in Western painting has ever captured such an enduring demonic imaginary like Bosch has,” argues Ed Simon for Hyperallergic. “ … [T]he result has been five centuries of nightmares, the progeny of the Netherlandish painter visible in contemporary Satanic imagery from horror movies to heavy metal music.”

Reviewing “Hell and Paradise” for Hungarian media outlet Papageno, Zsuzsa Borbély aptly summarizes the chaotic nature of Bosch’s work. Instead of focusing on a central figure, the painter offers “something to see … [a]t almost every point on the canvas,” Borbély notes, per Google Translate. “Thus, it is left to the observer to find out which detail is remarkable and outstanding.”

Examining a Bosch altarpiece up close, whether in person or digitally, yields new details with each viewing. Though these hellscapes are ostensibly designed to terrify, they’re also imbued with what Artsy’s Alexa Gotthardt describes as “a whimsical weirdness.”

For every person with a sword through their skull, there’s an image unmistakably engineered to entertain, whether it’s a pig dressed in a nun’s habit in The Garden of Earthly Delights, a portly man simultaneously guzzling a drink from a barrel and defecating in the Bruges Last Judgment or a mustachioed head attached to a set of feet at the bottom of the better-known Vienna Last Judgment.

As Charles de Mooij, director of Het Noordbrabants Museum, which hosted the blockbuster 2016 retrospective, told the Wall Street Journal’s Anna Russell at the time, “Every painting has its own secrets.”

“Between Hell and Paradise: The Enigmatic World of Hieronymus Bosch” is on view at the Museum of Fine Arts, Budapest, in Hungary through July 17.