Immerse Yourself in Five Futuristic Worlds 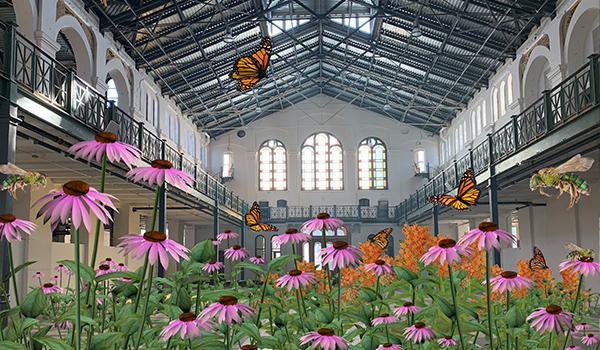 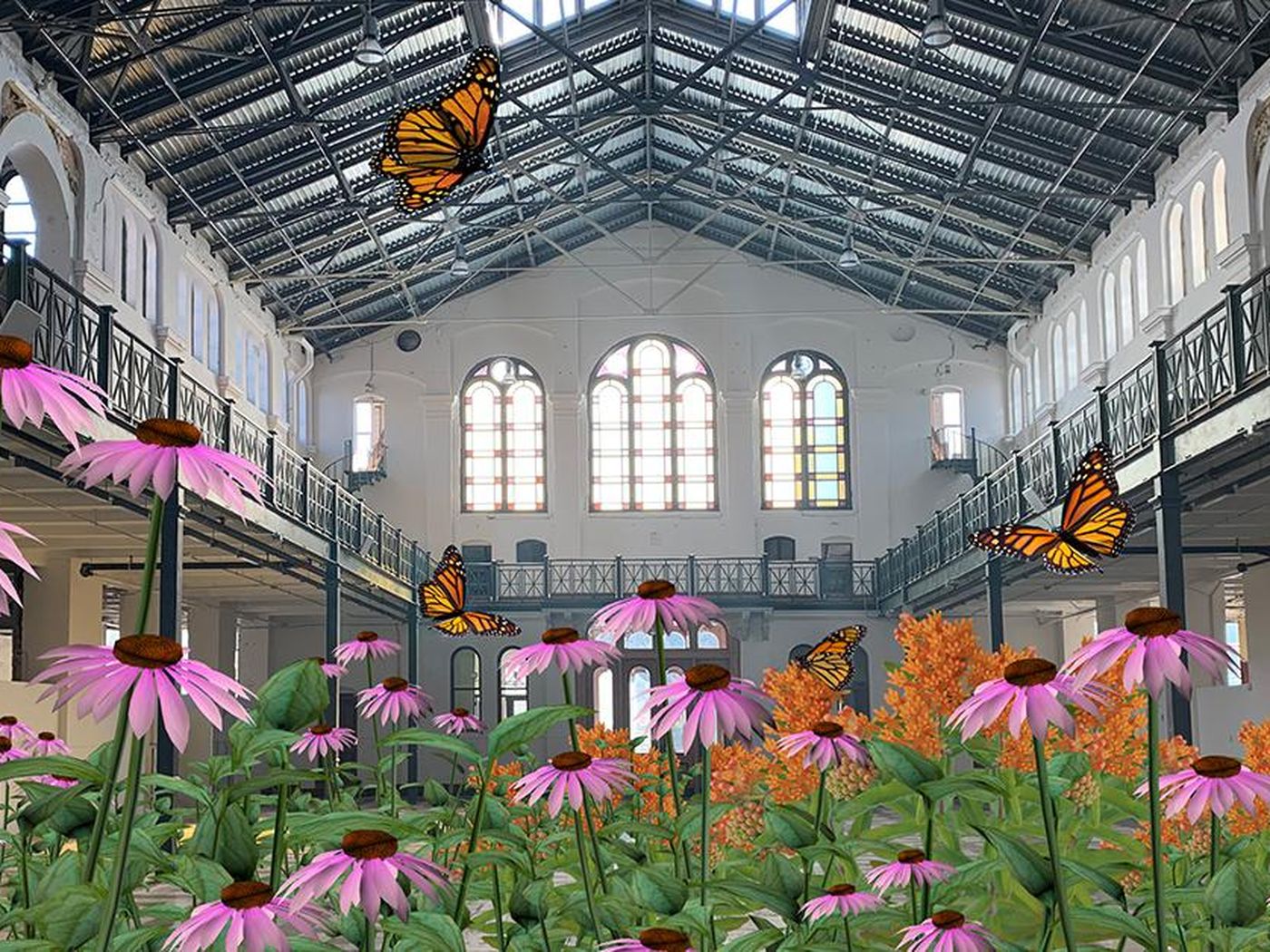 Rendering of ReWildAR, an augmented reality experience debuting at the Smithsonian's "Futures" exhibition later this year Courtesy of Tamiko Thiel

When the Smithsonian’s Arts and Industries Building (AIB) reopens to the public this November, visitors will enter the historic museum through a kaleidoscopic archway that shifts in appearance depending on the weather and time of day. Crafted out of such disparate materials as dichroic glass, drywall, metal and plastic, the sculptural light installation—the brainchild of Korean American artist Soo Sunny Park—will serve as an “otherworldly intervention on the National Mall [that asks] the public to embrace the moment when the present constantly changes into the future,” according to a statement.

Park’s monumental artwork is one of five newly announced commissions slated to appear at AIB’s upcoming “Futures” exhibition. The featured artists—Park, Beatriz Cortez, Nettrice Gaskins, Devan Shimoyama, and duo Tamiko Thiel and /p (Peter Graf)—work across a range of media and are all making their Smithsonian debuts. Each installation will showcase its creator’s (or creators’) unique vision of a possible future world.

“[I]n working so closely with the artists during the process of making these bespoke works, it’s clear to me that they are each considering the same big ideas and questions about the future,” AIB curator Ashley Molese tells Smithsonian magazine. “What will it look like? What’s going to be important to ‘us’—who even is the ‘us’ of the future? ... Though they differ in scale and composition, they each surface an imagining of a future that serves humanity better and more empathetically.”

Part exhibition and part festival, “Futures” is the Smithsonian’s first building-wide exploration of its eponymous subject. Drawing on the tradition of 19th- and 20th-century world’s fairs, the show will include some 150 objects split across four thematic halls: “Futures Past,” which presents visions of the future as imagined by prior generations; “Futures That Work,” which focuses on problem-solving technology; “Futures That Inspire,” which seeks to spark wonder and creativity; and “Futures That Unite,” which discusses how humans can build a more equitable society. Among the artifacts, installations, artworks, interactive displays and speculative designs set to go on view are a Virgin Hyperloop Pegasus pod, fish-skin fashions and a biodegradable burial urn.

Molese tells Smithsonian that the “Futures” team selected artists whose materials and style would resonate with AIB’s unique architecture. (Then known as the National Museum, the venue opened in 1881 and was quickly dubbed America’s “Palace of Wonders.”) Curators hoped to address broader questions posed by the exhibition through these individuals’ research and artistic practice.

For “Futures That Work,” Los Angeles–based artist Beatriz Cortez will create Chultún El Semillero, a large-scale sculpture that melds ancient Maya technologies with modern space travel. The speculative installation is modeled on Maya chultunes, or subterranean spaces used to store seeds, food and other essential supplies. Rather than remaining hidden underground, this chultun appears poised to cross time and space, carrying its precious cargo—a collection of plants and seeds native to the Americas—to humans in the future. Per an artist statement, Cortez chose the imagined capsule’s contents based on archival research conducted by the Smithsonian’s National Museum of the American Indian and conversations with members of Indigenous groups in Guatemala and Honduras.

Developed at a time of debate over access to Covid-19 vaccines, Chultún El Semillero will ask viewers to consider who controls resources and why.

“One of the lessons that these seeds contain is that life is only possible through cosmic, interspecies collaborations, and through the sustained care of many generations of different species working to preserve, reproduce the atmosphere, the environment, the earth,” says Cortez in the statement. “Preserved as they are in this safe capsule, a problem emerges: What is their destiny? Who will benefit from these seeds? How will they be distributed in the future?”

Another installation in the show, Devan Shimoyama’s The Grove, similarly takes its cue from the tumult of 2020. On view in “Futures That Unite,” the installation will transform bedazzled utility poles, complete with decorated shoes and silk flowers hanging from their power lines, into an urban forest that invites meditation on grief and systemic injustice. As the statement notes, the makeshift woods reference “community traditions of spontaneous memorials and will be adorned with thousands of Swarovski crystals to offer a sense of light, magic, and the divine in witness to lives lost.”

Molese says, “[Shimoyama’s] work is not just a passive space for reflection but an active tool of acknowledgment and reconciliation to the collective mourning we all experienced in 2020. Much like monuments intend to, his work presents a potential pathway for making a future that does actually unite us.”

In “Futures That Inspire,” Tamiko Thiel and /p will use augmented reality to reimagine AIB as a meadow full of native plants and insects, including dogwood flowers, milkweed leaves, monarch caterpillars and short-haired dogwood mining bees. Titled ReWildAR, the installation promotes rewilding, a conservation approach that seeks to restore land and water to what BBC Newsround describes as “a more natural—or wilder—state.” According to Molese, the experience is “designed to suspend disbelief by creating an alternative environment rendered into real time and space, playing with the visitor’s perception where they are and in what time period, and offering a glimpse into a potential future landscape.”

“[W]e wanted to add more thoughtful human touches to help connect people to the living person and not an abstracted view of their work,” says Molese.

The curator emphasizes the “extraordinary set of circumstances” surrounding the installations’ development. In addition to arriving on the heels of an especially turbulent year, “Futures” is timed to coincide with the Smithsonian Institution’s 175th anniversary.

“[W]ith ‘Futures’ it feels especially important and timely that we ask these particular artists to present these future visions with their own lived experiences and responses to the current moment—it feels more genuine, perhaps even more honest,” Molese concludes. “We wanted to surface as many unique and diverse voices as possible across the whole of ‘Futures’ [because] it feels more authentic to how the future ought to be.”

“Futures” will be on view at the Smithsonian’s Arts and Industries Building from November 2021 to July 2022. Find the latest information on the exhibition at aib.si.edu.