A new exhibition in Illinois centers the stories of the 20,000 Jewish refugees who fled to the Chinese city 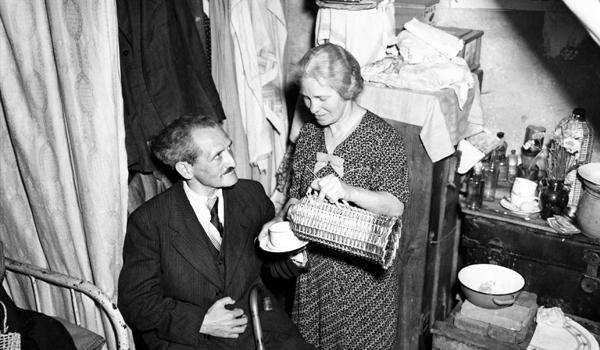 When European Jews targeted by the Nazis sought help from nations around the world, most of their pleas went unanswered: At a 1938 conference of 32 countries, for instance, only the tiny Dominican Republic agreed to welcome additional German Jewish evacuees. Countries such as the United States, Canada and Cuba, meanwhile, turned away ships of desperate refugees at ports and tightened immigration laws.

While most places shut Jews out, one offered safe harbor: Shanghai, the cosmopolitan coastal city then under Japanese occupation. About 20,000 Jews settled in Shanghai between 1938 and 1941. But by 1943, Japan—under pressure from its German allies—had forced these stateless refugees into a one-square-mile ghetto known as the Hongkew District (now Hongkou).

In Shanghai’s so-called “Little Vienna,” residents had to contend with strict surveillance, overcrowding and rampant disease. But their Chinese neighbors treated them kindly, and refugees established synagogues and businesses that afforded a measure of stability compared to the devastation back home, as Barbara Demick wrote for the Los Angeles Times in 2012.

Visitors to the Illinois Holocaust Museum & Education Center in Skokie can now explore this lesser-known chapter of Chinese and Holocaust history at the “Shanghai: Safe Haven During the Holocaust” exhibition. On view through September 2022, the show highlights 22 large-scale snapshots by American journalist Arthur Rothstein, who photographed Hongkew on assignment for the United Nations in 1946.

Also featured are the stories and heirlooms of Chicago-area residents who once lived in the Chinese neighborhood, reports the Associated Press (AP).

Survivor Doris Fogel was just 4 years old when she fled Berlin for Shanghai, where her single mother found work in a soup kitchen.

“Sharing one room with four other people for five years, going without tap water for nearly a decade, using a bucket as a lavatory,” recalls Fogel in a statement. “… It made me tough, made me street smart. It made me learn how to take care of myself.”

Judy Fleischer Kolb’s family fled Germany the year after Kristallnacht, the Nazis’ brutal, November 1938 raid on Jewish communities. Her grandmother, Martha Frankenstein, successfully negotiated the release of her husband, Julius, from the Sachsenhausen concentration camp and sold most of the family fabric business to purchase boat tickets to Shanghai.

“Basically, when they left Germany, [my family] had to give up everything,” the now 81-year-old Kolb tells Smithsonian magazine.

Each family was allowed to bring 10 marks—about $4 USD at the time—and a smattering of clothing and furniture, which Martha used to illicitly stow some of her jewelry.

Kolb’s parents, Carla and Cantor Leopold Fleischer, married just one month before the group set sail on the 8,000-mile journey from Germany to a Yangtze River port. Kolb was born the following year, in March 1940.

Shanghai proved a popular destination for Jewish refugees in part because it allowed entry with both visas and boat tickets, such as the ones purchased by Kolb’s relatives. Heroic Chinese officials also went out of their way to offer shelter: Feng-Shan Ho, the Chinese chief consul in Vienna, defied orders and risked his job to issue thousands of visas to Jewish Austrians during the war.

Even before World War II, Shanghai was home to a sizable Russian Jewish immigrant population, most of whom had fled the country following Vladimir Lenin’s rise to power in 1917, reports Ronan O’Connell for BBC Travel. These existing communities established housing and kitchens for the new refugees, ensuring that “people were well taken care of,” says Kolb.

Likewise, in a family photograph from the same period, Kolb appears as a cheery toddler smiling and hugging her friends in a Hongkew school yard.

Despite everything, “I had a very happy childhood,” she says. “Of course, I no idea where I was, or that it wasn’t the ideal place to be.”

Kolb remembers playing in the courtyard with her Chinese neighbors—play being a “universal language,” as she never learned Mandarin—and eating pastries at a German bakery opened by her uncle.

Her parents’ official documents, resident papers and other ephemera are displayed in the exhibition. Kolb grew up sharing a bedroom with her grandparents; their room also doubled as an office for the transportation business that the family ran to keep afloat.

Hanging in the room adjacent to Rothstein’s photographs is a replica of one of the Kolb family’s most cherished possessions: a knitted red dress with faint gray trim and white buttons. Martha made the garment for her granddaughter shortly after her birth.

Another Rothstein image depicts a crowd of people scanning lists of names of concentration camp survivors after the war, presumably in search of news of their relatives and friends. Kolb’s father, Leopold, spent years desperately attempting to secure passage to Shanghai for his parents and sister. Despite his efforts, they were all deported and murdered at Auschwitz.

“He still gave me this loving life, my whole life,” she says. “… As I look back, I think, coming from uncertain times, that maybe this was a little stability. It was something to keep [my parents’] minds off what was going on, that they had a child that they had to protect and take care of.”

The family obtained a sponsorship to travel to the U.S. in 1948 and arrived in San Francisco just shy of Kolb’s 8th birthday. They later moved to Chicago’s Hyde Park.

Kolb visited her birthplace, where memorials and a museum commemorate the now-vanished Jewish enclave, in 2005 and 2015. But it wasn’t until long after her parents and grandparents died that Kolb realized the full extent of what they must have gone through.

“I watched a documentary” about the Hongkew district, she recalls, “and I must have sat there with my mouth open. I could not believe the conditions of Shanghai and what people did to survive.”

“Shanghai: Safe Haven During the Holocaust” is on view at the Illinois Holocaust Museum & Education Center in Skokie through September 5, 2022.