How the Medici Used Portraits as Propaganda 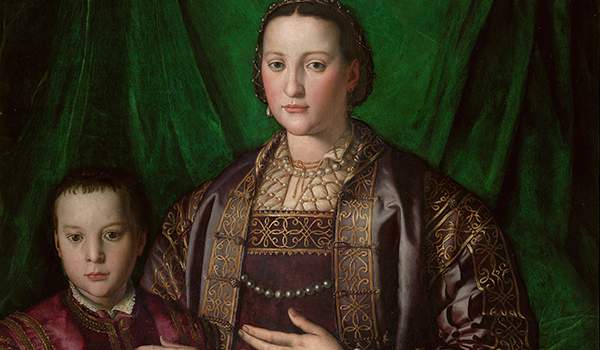 When Cosimo I de’ Medici, a 17-year-old from a lesser-known branch of Florence’s famed Medici family, came to power in 1537, the republic’s elite expected him to serve as a mere figurehead. Instead, the young duke wrested control from the city’s elected officials, establishing himself as an autocratic ruler at a turbulent point in Florentine history.

“[Y]ou, Cosimo I—you rose to power after an assassination (of a cousin) in the 1530s, when Florence had lost its identity and become a pawn in European politics,” writes James Barron for the New York Times. “You made Florence matter again, even if you were a tyrant, and Florence was grateful.”

As Peter Saenger reports for the Wall Street Journal, a new exhibition at the Metropolitan Museum of Art explores how Cosimo and the rest of the Medici used the era’s dominant medium—art—“as propaganda, making clear that Florence was still a power to reckon with.” Featuring more than 90 works by the likes of Raphael, Jacopo da Pontormo and Benvenuto Cellini, “The Medici: Portraits and Politics, 1512–1570” traces the banking dynasty’s cultural initiatives across nearly six decades, demonstrating how the family’s patronage cemented Florence’s status as the epicenter of the Italian Renaissance.

“The brilliance of Cosimo I de’ Medici was the way he employed culture both to create a sense of legitimacy and as a means of assuring Florence a place in a transformed political map,” Keith Christiansen, chairman of the Met’s department of European paintings, tells the Times. “He nurtured the idea of Florence as the intellectual powerhouse of the Renaissance and the Medici as the key players.”

Per a statement, the exhibition opens with an imposing bronze bust of Cosimo created by Cellini around 1545. On loan from the Museo Nazionale del Bargello in Florence, the larger-than-life sculpture is newly restored; according to Agenzia Nazionale Stampa Associata (ANSA), experts realized that its eyes, long hidden under a dark sheen, were actually crafted out of silver—a practice pioneered by the classical civilizations that Renaissance artists strived to emulate.

In 1557, the much-lauded bust found a permanent home above the main entrance of a fortress on the island of Elba. Looming over the stronghold’s gate, its piercing gaze and Roman-style armor conveyed Cosimo’s power, building on “imperial iconography” to draw an explicit connection between the Medici and Italy’s ancient leaders, writes guest curator Carlo Falciani in the exhibition catalog.

Other works in the show similarly connect the family to classical culture. Bronzino’s Cosimo I de’ Medici as Orpheus (1537–39), for instance, casts the duke as the mythological musician Orpheus, aligning “him with forces beyond the world of mere mortals,” as the Met’s exhibition primer points out. A marble bust of an aging Cosimo by the sculptor Giovanni Bandini, meanwhile, shows him as a “Roman emperor, suggesting the timelessness of his authority.”

“Portraits and Politics” is split into six thematic sections that follow the Medici from the early 16th century, when the family was newly returned from exile and struggling to maintain Florence’s dominance in a changing political landscape, to 1569, when Pope Pius V named Cosimo Grand Duke of Tuscany in recognition of his successful unification of the Italian region.

“For us to see how the High Renaissance rulers cemented their power through commissioning art and associating with artists and culture is important,” the Met’s director, Max Hollein, tells the Times. “A fairly calibrated image was being presented to enhance the idea of their rulership even then. That gets forgotten. These works are taken out of context and put up in museums to be admired for their aesthetic merits.”

The first two sections of the exhibition cover the years 1512 to 1534, introducing visitors to such famed family members as Pope Clement VII, nephew of Lorenzo the Magnificent, and Alessandro de’ Medici, who was likely the son of Lorenzo di Piero, Duke of Urbino, and an enslaved African woman. (Alessandro’s assassination in 1537 paved the way for Cosimo’s rise to power.) Next, the show shifts focus to Cosimo himself, examining how the duke and his immediate family, including his first wife, Eleonora of Toledo, used portraits to “project power, assert the continuity of the dynasty and convey cultural refinement,” per the statement.

As Falciani writes in the catalog, Bronzino painted multiple portraits of Eleonora posing alongside her sons. The curator adds, “[T]he presence of each next to his mother [suggested] that the next generation would bring forth shoots from a newly invigorated dynastic trunk.” Also on view at the Met is a sumptuous red velvet dress likely gifted by the Spanish noblewoman to a convent in Pisa.

The second half of “Portraits and Politics” zooms in on the individuals whose art elevated Florence to such cultural heights. One section juxtaposes the work of Bronzino, the Mannerist artist who served as Cosimo’s court painter, and Francesco Salviati, whose “pan-Italian style” competed with Bronzino’s “insistently Florentine-based art,” according to the statement.

Another area of the show celebrates the city’s literary culture, which was inextricably linked to portraiture. As the catalog explains, “however lifelike the image of a face might be, this alone could not convey the most intimate aspects of the sitter’s identity, which as the century wore on, became increasingly entrusted to symbols, allegories or a codified formal language capable of giving visibility to concepts that had previously been confined to poetry.” A highlight of this section is Bronzino’s newly restored portrait of poet Laura Battiferri. The Journal notes that Laura’s likeness references two other famous Florentine poets: Her profile is “deliberately styled to resemble Dante,” and she holds a book of verses by Petrarch.

Not all of the figures featured are as well-known as Cosimo, his cousin Catherine and his namesake ancestor (also known as Cosimo the Elder). As the Times observes, a Bronzino portrait of Lodovico Capponi, whose main claim to fame was getting “into a dust-up in church, during a Mass, with … the husband of a woman he fancied,” graces the cover of the catalog.

The painting’s subject is of little historical note (he wasn’t actually a Medici, but rather the son of a wealthy Florentine banker), but the work itself—described in the catalog as a “masterpiece” of 16th-century portraiture—aptly summarizes the exhibition’s broader message about the power of art as propaganda. Depicting a young man holding a medallion portrait of a woman (perhaps the subject of his latest infatuation) close to his chest in front of a green backdrop, the portrait is filled with symbolism: Per the catalog, it appears “to exalt the ability of young Ludovico to resist the adverse blows of destiny, whether in love or, more broadly, in a future beyond the vigor of his youth.”

The “Portraits and Politics” primer closes with a quote from the Renaissance’s most renowned artist: Leonardo da Vinci, whose early career was shaped by Lorenzo the Magnificent.

Acknowledging the staying power of great art—and the rulers who commissioned it—the Old Master observes, “How many emperors and how many princes have lived and died and no record of them remains, and they only sought to gain dominions and riches in order that their fame might be ever-lasting.”