What to Know About the Gardner Museum Heist 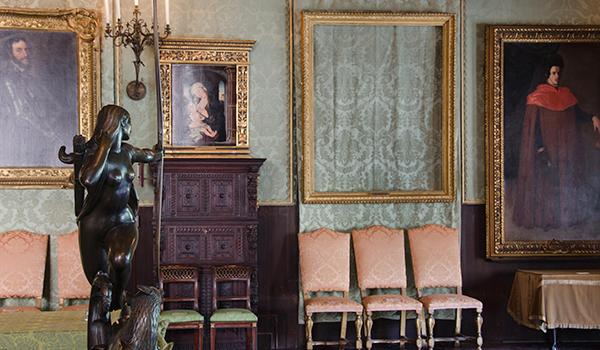 A new Netflix documentary, "This Is a Robbery," delves into the mystery of a 1990 art heist. Public domain via Wikimedia Commons

From start to finish, the biggest art heist in modern history lasted just 81 minutes. At 1:24 a.m. on March 18, 1990, two men dressed as police officers walked into Boston’s Isabella Stewart Gardner Museum. They overpowered two unsuspecting night security guards, then duct-taped their victims to a pipe and a workbench in the museum basement.

“Gentlemen, this is a robbery,” the criminals announced.

The pair proceeded to remove 13 treasured artworks on display in the lavishly decorated gallery, smashing the protective glass of two Rembrandt paintings and cutting the canvases from their gilded frames. Just over an hour later, the thieves made off with a staggering collection of art that’s valued today at $500 million.

Despite a flurry of press attention—and the $10 million reward offered by the museum for the items’ safe return—the stolen works have never been recovered. Now, a new Netflix docuseries, “This Is a Robbery: The World’s Biggest Art Heist,” takes a deep dive into the thorny mysteries surrounding the crime. As Adrian Horton reports for the Guardian, the four-part show builds on the reporting of the Boston Globe and WBUR, as well as the FBI’s ongoing investigation.

For amateur sleuths and art lovers alike, here are five key things to know about the infamous heist.

1. The thieves likely succeeded due to canny planning, luck and lax security.

Wealthy American art collector Isabella Stewart Gardner constructed her namesake museum out of her private, Venetian palazzo–inspired home in the hope that it would provide “for the education and enjoyment of the public forever.” But after her death in 1924, the museum fell into financial disrepair. By 1990, the museum’s security flaws were common knowledge among Boston’s criminal elite, making it a bit of a “sitting duck” for a heist, per the Guardian.

Late on the night of March 18, the two thieves tricked the young guards on duty, 23-year-old Rick Abath and 25-year-old Randy Hestand, into buzzing them inside. Dressed in stolen police uniforms, the burglars pretended to be cops responding to a disturbance call linked to the rowdy Saint Patrick’s Day celebrations taking place outside.

Once inside, the criminals overpowered the hapless guards, disabled the security cameras and got to work removing precious works of art from their frames. The thieves departed at 2:45 a.m. after making two separate trips to their car with the artwork in tow; the night guards, their mouths duct-taped shut, remained trapped in the museum basement until the police, called in by the next set of guards to arrive at the museum, found them around 8:15 a.m.

2. The perpetrators stole masterpieces by Vermeer and Rembrandt
but left the most expensive painting in the building untouched.

The thieves made a beeline for some of the museum’s greatest treasures, including Christ in the Storm on the Sea of Galilee, the only known seascape painted by Rembrandt; A Lady and Gentleman in Black, also by Rembrandt; and Johannes Vermeer’s The Concert, one of just dozens of the Dutch Old Master’s paintings to survive today. They also picked up a self-portrait sketch by Rembrandt, five sketches by French Impressionist Edgar Degas, a small portrait of a man by Édouard Manet and an ancient Chinese bronze vessel.

Bizarrely, the burglars attempted to remove the flag of Napoleon’s Imperial Guard from its frame but failed to do so, instead settling for a bronze, eagle-shaped finial, or ornament. Stranger still, the perpetrators left possibly the most expensive work in the museum untouched: Titian’s The Rape of Europa, which was hanging in a third-floor gallery.

Per Robert M. Poole of Smithsonian magazine, the seemingly random assortment of stolen goods has confused authorities and journalists for decades.

“What continues to perplex those investigating the Gardner mystery is that no single motive or pattern seems to emerge from the thousands of pages of evidence gathered over the past 15 years,” wrote Poole in 2005. “Were the works taken for love, money, ransom, glory, barter or for some tangled combination of them all?”

Today, museumgoers can visit the Gardner in person or take a virtual tour showing what the thieves left behind: empty frames that hang eerily on the walls as a reminder of the loss.

3. The FBI has named suspects in the crime, but the works remain missing.

In 2013, the FBI announced that it had identified the two thieves with a “high degree of confidence.” In 2015, the organization revealed the names of its primary suspects: George Reissfelder and Leonard DiMuzio, two associates of the late mobster Carmello Merlino. Both resembled police sketches of the criminals and died within one year of the heist.

The investigators also said that they suspected the art was transported via organized crime networks to Connecticut and the Philadelphia region, where the thieves attempted to sell the works on the black market. After those attempted sales, however, the artworks’ trail goes cold.

Authorities were initially suspicious of the two young guards on duty that night. Abath, a self-described hippie and rock guitarist, was a regular on the night shift. Because art crimes of this nature typically require an inside source, he was high on the list of possible conspirators.

Abath, for his part, has long denied any role in the heist, and authorities have generally cleared him as a person of interest, reported Tom Mashberg for the New York Times in 2015.

“I was just this hippie guy who wasn't hurting anything, wasn’t on anybody’s radar and the next day I was on everybody’s radar for the largest art heist in history,” he told NPR that same year.

In another wrinkle, Abath’s role in the drama once again came under scrutiny in 2015, when the United States Attorney’s office in Massachusetts released a rare security camera video. The grainy footage shows Abath, who was on guard during the day of March 17, opening the same side doors used by the thieves and admitting an unidentified man in a waist-length coat and an upturned collar, as the Times reported.

4. Theories big and small abound, but certain answers are hard to come by.

As the Guardian reports, dozens of theories ranging from conspiratorial to credible have cropped up over the years. Most people, including the FBI, argue that the works traveled through organized crime networks in Boston: namely, the mob.

“This Is a Robbery” is less interested in “whodunnit” and more interested in tracking where the paintings might have ended up. The narrative centers on Bobby Donati, a mobster who may have organized the theft with fellow criminal Robert (Bobby) Guarente in order to use the art as a bargaining chip to get their friend Vincent Ferrara out of jail, per Lauren Kranc of Esquire. Both Donati and Guarente are now dead.

Another former mobster, Robert Gentile, has long maintained his innocence despite a bevy of evidence pointing to his involvement in the crime. The octogenarian was released from prison in 2019 after serving 54 months on an unrelated charge. He remains the only living person who likely has firsthand knowledge of the 1990 heist.

The series briefly considers several wilder suggestions, including the theory that members of the Irish Republic Army (IRA) were involved in the crime, notes Esquire. The directors also interviewed Myles Connor Jr., a colorful character and convicted art thief who was in jail at the time of the robbery. Connor provides essential context about how the underground art market operated during the 1990s.

“Researching the case was like learning the game of chess,” docuseries director Colin Barnicle tells Town & Country’s Norman Vanamee. “The more you know about it, the more options you see.”

5. If you have information about the robbery, the authorities and the Gardner Museum want your help.

People with information about the stolen artworks should contact security chief Amore at [email protected].

The museum is offering a $10 million reward to anyone who provides information leading directly to the safe return of the stolen works. Individuals whose information leads to the restitution of some, but not all, of the works will receive a partial reward. Anyone who helps return the Napoleonic eagle finial will receive a separate $100,000 reward.

Even someone involved in the theft itself can come forward; per the Times, the statute of limitations on the crime has expired.

The Globe and WBUR’s investigative podcast “Last Seen” helped publicize the theft upon its debut in 2018. Barnicle says he hopes the new series will bring the plight of the paintings to an even wider audience—with the lingering hope that someone watching might know something new about the art’s whereabouts.

“I think if the docuseries doesn’t help, then they’re gone,” Barnicle tells Boston.com’s Kevin Slane. “This [show] is like the biggest wanted poster in the world.”