French photographer Greg Lecoeur triumphed over more than 5,500 submissions from hundreds of artists around the world 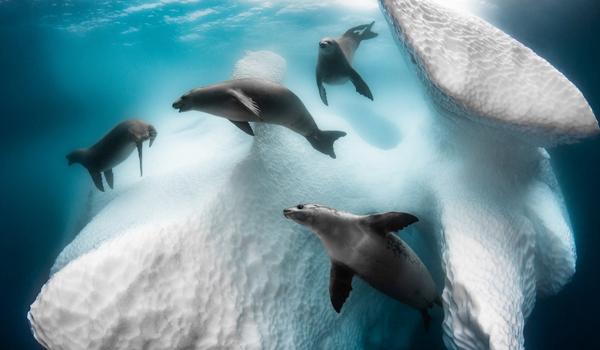 Greg Lecoeur won the title of Underwater Photographer of the Year 2020 for his Frozen Mobile Home, a playful snapshot of seals circling an iceberg. © Greg Lecoeur / UPY2020

On land, seals may at times seem like bumbling, blubbery goofballs. But in their true element—the watery depths of the ocean—these sleek marine creatures are capable of elegant pirouettes that put even the most seasoned ballerinas to shame.

A breathtaking shot of this dazzling subsurface dance, as performed by four crab-eater seals frolicking beneath an iceberg, has earned French photographer Greg Lecoeur the prestigious Underwater Photographer of the Year Award, judges announced on Sunday.

Chosen from more than 5,500 images submitted by artists around the world, Lecoeur’s underwater portrait was praised by the selection committee as a “deserved and unanimous winner which combines photographic beauty, composition, exquisite light and delicate colors,” according to the organization’s website.

Cheekily dubbed Frozen Mobile Home, the photo pulls back the curtain on “a corner of the world that few people have witnessed,” said one judge. Almost three-dimensional in its vivaciousness, the image bursts off the screen thanks to the four cavorting seals, immortalized by Lecoeur during an expedition to Antarctica. Also lively is the iceberg itself, a moving kingdom that ferries nutrients from land to sea, fueling food chains and shuttling carbon between air and water. As sea ice continues to disappear from Earth’s poles, the photo is a shining beacon of the biodiversity humankind stands to lose.

More than 100 images and photography books received top billing on the competition’s website, with awards going to standouts in categories including Wide Angle, Macro, Wrecks, Behavior, Portrait, Black and White, Compact, Up and Coming and Marine Conservation. Taking the cake in the Up and Coming category was Anita Kainrath of Austria, who waded into knee-high, mosquito-infested waters in the Bahamas to capture Lemon Shark Pups in Mangrove Nursery. Her perseverance clearly paid off, one judge noted: After acclimating to Kainrath’s presence, the petite predators sidled up next to their photographer, bumping against her legs and trying to sneak a taste of the camera’s strobes.

A striking entry called Eyes by Japan’s Keigo Kawamura received runner-up in the Macro category. Featuring an array of gleaming, blue-tinged unicorn shrimp—named for the long horn-like protrusions that sprout from their heads—the photo captures the rarely-seen crustaceans, which typically inhabit the sea at depths of up to 1,000 feet. Kawamura managed to snap the shrimp when they swam upwards to breathe, dutifully returning each evening for a 15-minute shoot in the hopes of catching the creatures at their best.

Another runner up, Saudi Titanic by American photographer Renee Capozzola, was highlighted in the Wrecks category. Taken in Saudi Arabia along the Gulf of Aqaba in the Red Sea, the image captures the remnants of a large cargo ship that’s been bobbing in the region’s waters for more than 30 years. Though the vessel itself is damaged well beyond repair, it teems with life, hosting schools of fish and groves of corals in its interior—a spectacular juxtaposition underscored by Capozzola’s split-shot approach, as one judge noted.

After doggedly pursuing a school of spotted eagle rays in the Maldives, the United Kingdom’s Henley Spiers nabbed runner-up in the Black and White category with Constellation of Eagle Rays. The chase kept Spiers keenly aware of his land-adapted limbs, ill-suited for swimming compared with his subjects: “While the rays glided effortlessly, I swam my heart out trying to keep up and unlock the desired camera angle,” he wrote.

In the Behavior category, Italy’s Pasquale Vassallo swept the competition with Octopus Training, which features a cephalopod bobbing along the underside of a soccer ball discarded at sea. “I think it is training for the next football World Cup!” Vassallo joked in the photo’s caption. But judge Alex Mustard notes that the image has a darker side as well: “The photo poignantly reminds us that oceans have, for too long, been a rubbish dump for all our old and unwanted trash.”

Vassallo also took the prize in the Marine Conservation division with Last Dawn, Last Gasp, an appropriately breathtaking shot of a tuna snared in an ascending net, struggling in vain to wrest itself free. The fish’s wide-eyed gape takes center stage, mesh tugging at its open mouth. “If a picture paints a thousand words, then a great one asks a thousand questions,” wrote judge Peter Rowlands. “You know those questions; so do I. All we can do is show the truth to those who live above but can’t envisage the world below, and hope that they, too, start asking questions.”

Katherine J. Wu is a Boston-based science journalist and Story Collider senior producer whose work has appeared in National Geographic, Undark magazine, Popular Science and more. She holds a Ph.D. in Microbiology and Immunobiology from Harvard University, and was Smithsonian magazine's 2018 AAAS Mass Media Fellow.