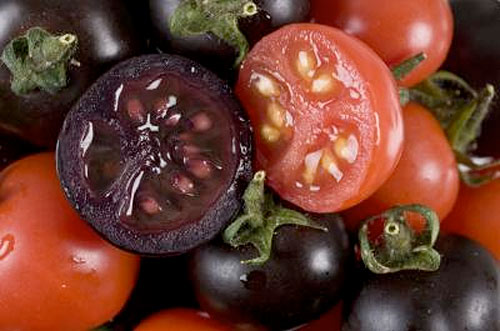 Ah, the last of the summer tomatoes. Plump, sun-warm, and soft. Sometimes I like to just eat them over the sink and let the rich purple juice run down my chin.

What's that? You were expecting rich red juice? But purple could be so much healthier, according to this week's Nature Biotechnology online. Scientists from England's John Innes Centre succeeded in transferring two genes from snapdragons into tomatoes, boosting the fruits' ability to produce pigments called anthocyanins. The resulting deeply purple fruit promoted longer lives when fed to laboratory mice.

This is one of those technological feats that makes you think "wow," "ew," and "the end of the world is nigh" all at once. I mean, I know this is done routinely nowadays, but just the thought that we know that somewhere inside a snapdragon is a gene that can persuade a tomato to change color is kind of amazing. Let alone that we can essentially cut and paste it into another plant without so much as a hiccup.

And it's all because you haven't been eating your vegetables. Fruits and veggies are high in a class of pigments called flavonoids that would be so good for you - if only you would eat them. But since only about 23 percent of Americans do eat enough veggies, Innes Centre scientists set out to invent a tomato with sky-high flavonoid levels. The idea being that instead of changing your eating habits, you can get healthy by squeezing ketchup over fries, eating pizza, and drinking bloody marys. Kind of neat thinking, really.

Enter the snapdragon: not popular on menus, but great at producing flavonoids. In particular, purple varieties called anthocyanins - the same stuff that makes blueberries blue and companies like Jamba Juice so eager to tell you about their smoothies. The list of health benefits the researchers provide includes

Sounds good, but I'm still not convinced purple tomatoes are the best way to get my anthocyanins. I'm not a raving opponent of transgenic crops (though I disagree with patenting them). I just think I'd rather have blueberries on my cereal than eat purple spaghetti. Heck, I'd probably rather have blueberry spaghetti.

Fad dieters take note: The Innes Centre website takes care to point out in bold type that seeds are not available for sale.