If millennials elected their own doctor, James Hamblin would make a good candidate for the position.

He does improv comedy. He has a YouTube series. He tweets frequently. He lives in Brooklyn. Recently, the former radiologist and current Atlantic senior editor has garnered attention for his series of quirky videos on medical topics that concern the average person, ranging from the health benefits of wine to whether you actually need to shower every day, as well as articles on more serious topics such as the dangers of SPF ratings and how rising incarceration rates can help spread disease.

So why would this digital maven decide to collect his wisdom in an old-fashioned book?

Hamblin believes that many people would enjoy reading about anatomy and physiology, if only they could find a book on the topic that wasn’t written for medical professionals. "I've long had this idea of doing an accessible, interesting textbook," he says. One of his inspirations was coming across the 2005 book Why Do Men Have Nipples? Hundreds of Questions You'd Only Ask a Doctor After Your Third Martini early last year. Hamblin's book, coming out next week from Doubleday, offers thorough and updated answers to the nipple question and more. Its title, inspired by the name of his YouTube series, is If Our Bodies Could Talk: A Guide to Operating and Maintaining the Human Body. 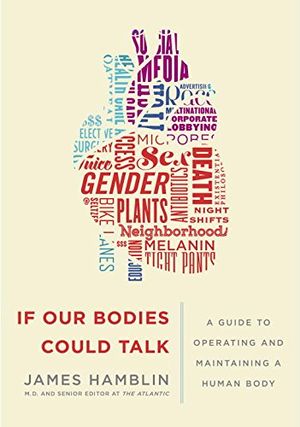 If Our Bodies Could Talk: A Guide to Operating and Maintaining a Human Body

The book, excerpted in the January/February issue of The Atlantic, does more than answer questions about food and sex, however. Hamblin draws on his journalistic skills, interviewing hundreds of doctors and scientists, and weaving thought-provoking stories such as the saga of Beth Usher, who had half her brain removed to prevent seizures by former surgeon and Secretary of Housing and Urban Development nominee Ben Carson. "She just has an amazing story and was an inspiring person to meet and get to know," Hamblin says.

Hamblin is part of the newest generation of "popular doctors"—a category that hasn’t always been painted in a flattering light. Dr. Mehmet Oz, the cardiac surgeon who charmed Oprah and millions of TV viewers, has faced intense criticism for "relying on flimsy or incomplete data, distorting the results, and wielding his vast influence in ways that threaten the health of anyone who watches the show," as Michael Specter wrote in a 2013 New Yorker profile. Among other things, Oz has been critiqued for endorsing medical products and offering medical advice of questionable efficacy.

For his part, Hamblin says that his book isn’t aiming to give you all the answers. While he does respond to many common medical questions in his book, he says he ultimately wants to help people think logically about the "deluge of information" on health issues that they confront in their everyday life through television, the Internet and social media. Ideally, they’ll come away with more confidence distinguishing between fake science and real science.

"We have so much information," Hamblin says, "that the best thing you can do right now for a person is equip with them some kind of framework for understanding how science works."

Ben Panko is a staff writer for Smithsonian.com