Why Conservationists Are Hopeful About the Manta Ray’s Future 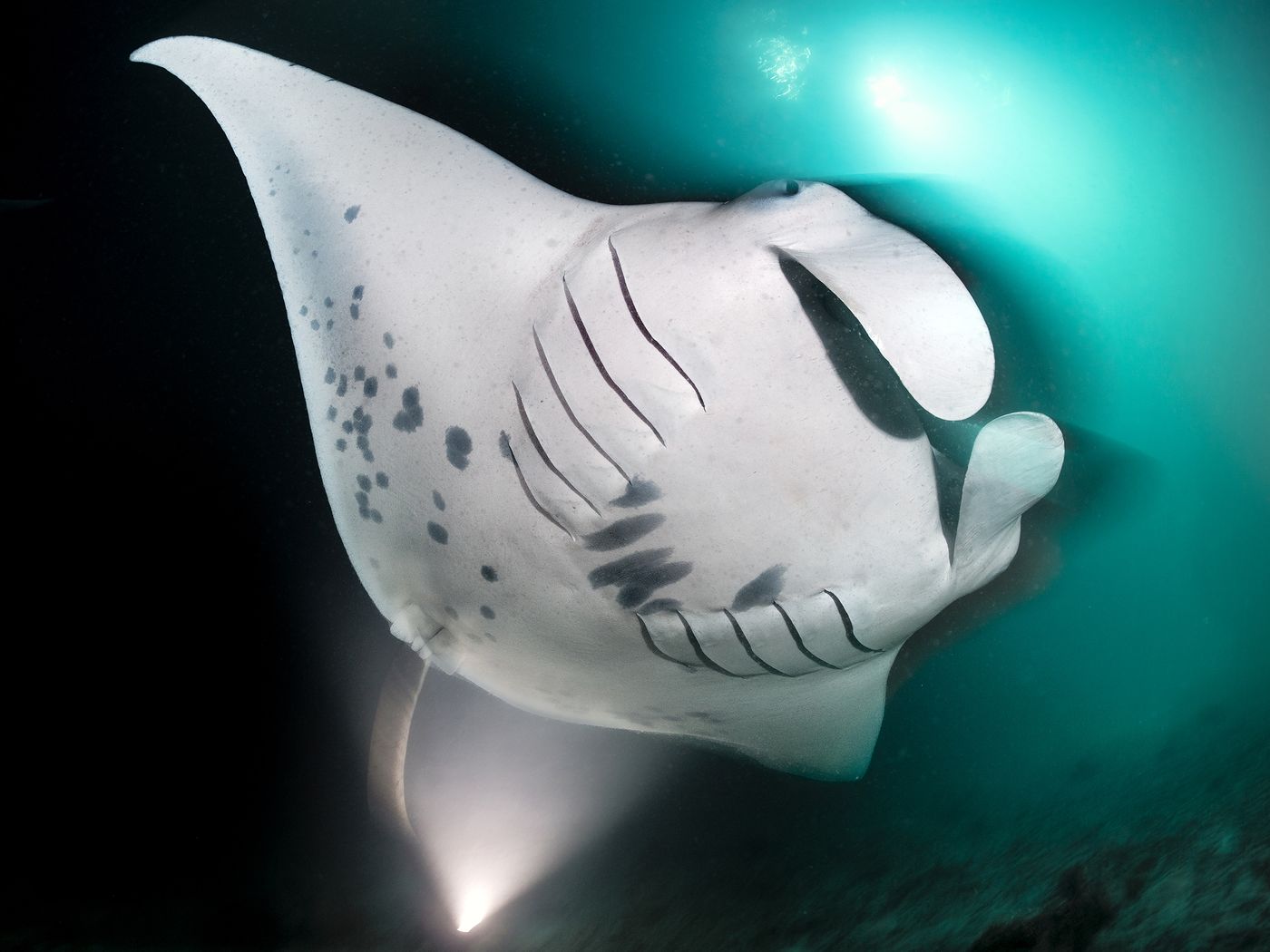 After the manta ray filters out the tiny plankton from the water it ingests, the excess water exits through the dark gill slits on the ray's ventral side.  Alex Mustard

For a reef manta ray like this one swooping in the Indian Ocean near the Maldives, motion is life. Like many shark species, a manta ray must constantly move to avoid sinking and to keep oxygen-rich water flowing across its gills. And because it is a very large animal that depends on a very small, even microscopic food source—plankton—the fish has to eat virtually all the time. Swimming through a plankton cloud, it opens its massive mouth, deploys special fins to funnel the seawater in, and filters out the tiny morsels with its comb-like gill plates.

Those plates, made of cartilage, are lately a source of trouble: Poachers are killing reef manta rays to supply quacks who peddle the material in a bogus remedy. That practice, plus deliberate killing of the fish for food, unintentional capture in nets, boat strikes and other threats have reduced world populations. Climate change looms as another challenge. The International Union for Conservation of Nature classifies the reef manta ray as “vulnerable.” Worry is justified. In the Sea of Cortez, aggressive overfishing wiped out local populations of two reef manta ray cousins, the oceanic manta ray and the devil ray, in just 20 years.

Conservation groups are spurring research into the slow-growing giant, which can stretch 12 feet wingtip to wingtip, weigh 1,500 pounds and live 40 years. “It’s a species that doesn’t have any way of adapting to survive human pressures,” says Joanna Harris, a researcher at Manta Trust, a U.K.-based nonprofit. “The only way to halt the decline is to take action.”

Harris, a doctoral candidate at the University of Plymouth, is working to understand environmental cues that prompt the fish to migrate, sometimes hundreds of miles, in search of food. How does it know where to go next, and when? A change in wind direction, which affects surface currents, appears to play a role. She says government officials, conservationists and scuba outfitters who lead reef manta ray-watching trips could all use such information to benefit the animals.

Protections seem to be effective in the Maldives, where catching reef manta rays is prohibited and rangers limit access to certain lagoons when the animals aggregate to feed. The island chain plays host to the world’s largest population of the majestic fish, with more than 5,000 individuals counted. The dark spot pattern on the underside of each one is unique and serves as an ID. The reef manta ray in this photograph, according to a Manta Trust database, is a juvenile male. His name is Naba.

Alex Mustard has been taking photographs underwater since he was nine years old. He dives and photographs all around the world.