Kevin Kelly's title at Wired magazine is "senior maverick." While he co-founded the publication in 1993, he has been thinking about the future in an outside-the-box way his whole career. A former editor of the countercultural technology magazine Whole Earth Review, Kelly has championed the Quantified Self movement whereby humans use technology to track their daily lives, co-sponsored the first Hackers Conference back in the mid-1980s and been involved in The Long Now Foundation, a project to look at our long-range future as humans. He's also written several books, including the bestselling What Technology Wants, which looks at technology as its own biological system.

In his new book, The Inevitable: Understanding the 12 Technological Forces That Will Shape Our Future, Kelly sorts what he sees as the biggest coming trends into 12 categories—things like "screening" (turning more surfaces into screens) and "tracking" (using surveillance technologies more and more). We talked with Kelly about his predictions for the world to come, and how we can help shape technology for the better.

The title of your book is The Inevitable. What does that mean, and why did you choose it?

It’s sort of slightly controversial because many people don’t believe that anything is inevitable. I use the term to indicate that there’s a general drift or leaning in technology such that the large forms are headed in a certain direction and we should embrace it. I like to think of it as gravity in a valley. Raindrops are falling in a valley. The drop of water as it flows down the valley is not predictable in its specifics, but the general direction is downward. 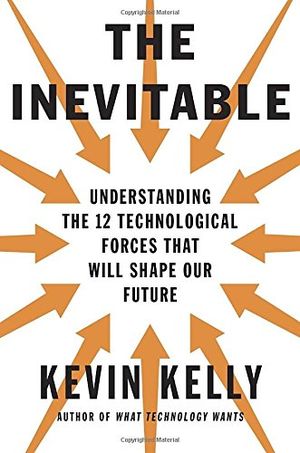 The Inevitable: Understanding the 12 Technological Forces That Will Shape Our Future

You talk about "sharing" in your book, and say we will share much more information in the future than we do now. What are some examples?

There’s a small movement, but I think it needs to be much bigger, which is about sharing our medical and health information. There’s so much to be gained for the benefit of us all by sharing what our bodies do and how we react and adjust to each day, any kind of perturbations during that day, anything we’re taking in terms of medications or medical interventions. If we can share all of that, that’s immensely powerful in terms of making better medications, making better knowledge about who we are and tailoring that to use specifically so we personally could benefit.

One thing I’ve long been an advocate of was the idea of the “quantified self,” where the sensors that can monitor things in our bodies become smaller and cheaper and easier to use, so we kind of wear them in clothes or where we sit, maybe we wear them on our wrists or different parts of our bodies, and they’re collecting information noninvasively. [In the future] we’re getting this info all the time, and then we can share it in different manners, whether it’s with our name on it, or anonymized, randomized or with encryption. That information is going into the cloud, and it’s being combined using artificial intelligence to extract out some meaning.

You also write how the future will be about “accessing” instead of owning. Can you talk more about this?

The general drift is that we as a society are moving away from owning things to accessing things. Access means that we can get the thing or the experience or the service any time we want from anywhere in the world. If you can kind of reach for something and get it, then that’s in many ways better than owning it and having to find it, take care of it, maintain it and upgrade it.

This movement was first evident in the digital realm. Most people aren’t really buying movies anymore in terms of owning them. You just buy a subscription to them that you have access to with Netflix or Amazon Prime or Hulu. Getting that movie any time you wanted was much better than having to purchase it on VHS, store it and upgrade it. And so now we’re seeing that same kind of shift away from ownership for even things like cars. The most visible thing was Uber. If you could summon a car any time, wherever you were, and it would appear within minutes and take you wherever you needed to go and then disappear, in many ways that’s a better arrangement than having to own a car, fix it and park it. Maybe in the future the Ubers will be self-driven, so we won’t even have to drive them.

Are there any examples of other countries being ahead of the United States in terms of specific uses of technology?

China is in many ways leading the charge in living on your phone. We look around and think, “Oh my gosh, these young millennials are just living on their phones.” Well, the millennials in China are two steps ahead of us. Some of their platforms, like WeChat, are Facebook plus Twitter plus PayPal plus Snapchat. They’ve got all the things wrapped into one, and the young there are completely living online. They order everything from their daily meals to rides, and organize events and their social lives to an extent we don’t see in the West. One of the innovations is they are very heavy users of voicemail. This is old school voicemail, but they use it and instant message with voice instead of pictures or text. This works really well and they’re now doing more and more video clips as a means of communication. So they’re ahead in the adoption of that aspect of social interaction.

[America will make the same shift] maybe within three years. We’re seeing that shift already, moving to pictures and emoticons instead of text. More and more or our lives are moving from text-based communication to visual-based communication. We’re moving from being “People of the Book” to “People of the Screen.” In the screen, the center of culture is no longer text but visuals, moving images that we flicker across the screen.

How will becoming “People of the Screen” change our culture?

There are a lot of other cultural changes that come about when you depend on flickering images instead of text. Books were fixed and didn’t change once written. Books had authors, which is the same root as “authority.” On the screen everything is ephemeral and flowing and unfinished, incomplete, relativistic, subjective. It’s moving very fast, and we have to sort of assemble it ourselves.

You consider yourself optimistic about the future. Why are so many portrayals of the future in movies and literature so dystopian?

Conflict, disaster, things unraveling are much more cinematic and make a better story than things working smoothly, which is basically boring. It makes a much better story if things collapse, and there’s nothing as mesmerizing as watching something blow up or smashing glass. There’s a bias that we’re hard-wired to want to tell a story in which things get worse, and that makes it really hard for us as a society to go forward because we don’t have as clear a vision of how the future might be friendly to us.

We live in an America with a very pessimistic view of the future that’s really unwarranted by the evidence. The evidence is very clear that progress is real and things are much better today than they were 10 years ago, 20 years ago, 200 years ago. If we were honest about that, we’d have to admit that things are getting better. And that because of history, we are most likely to continue making things better year after year. The things that are coming—artificial intelligence, virtual reality—we can imagine how things might go wrong, but it’s much more likely that things will go well.

Fifty years ago, our culture seemed more optimistic about the future, at least in terms of pop culture—all the techno-utopian sci-fi and TV shows from the 1950s and 1960s, for example. What changed to make us more negative?

We came to understand that every single technology will bite back. There’s a cost for every innovation. Every single new technology that’s been invented to solve a problem will invent almost as many new problems as it solves. Now we know. We’re pretty clear on that. It doesn’t matter how angelic the technology seems, it’s going to have major costs. And those major costs will have to be accounted for. I’m not a utopian. I don’t believe we’re going to have less problems in the future. We’re going to have more problems. But I’m a techno-solutionist. I’m a Silicon Valley guy. I believe that the solutions to those new problems are additional technologies.

You write about the impulse to shy away from new technologies out of fear, and why that instinct is harmful. So how can we as a society react better to the coming technologies of the future?

Some of the things that are coming are very scary. Artificial intelligence can look scary because it will certainly disrupt many of the jobs we can have. Virtual reality can be very scary, and total tracking can be very scary. There’s often an initial impulse to try to prohibit things like AI. Just recently, there was the first fatal crash in an automatically driven car. There’ll be calls for people to outlaw AI from driving cars because one person has died, forgetting the fact that as humans we kill a million people a year in autos. There will be reactions to downgrade, block and in some way turn back some of these technologies. I’m suggesting that, first of all, that doesn’t work, but that it’s only by engaging these technologies that we can steer them. It’s only by embracing them that we can decide the specifics and have control over it.

So while the internet was inevitable, the kind of internet we’re going to get is not at all. Will it be open or closed, neutral or not? These are decisions we have a lot of room to make, and we must make, and [they] will make a huge difference. But we can only make these changes by using this technology, not prohibiting it.