Since last March, the first floor of Jennifer Doudna’s Innovative Genomic Institute in Berkeley has become a Covid-19 testing facility processing thousands of samples each day. Doudna is a newly minted Nobel Prize recipient—she and her French collaborator Emmanuelle Charpentier won the honor “for the development of a method for genome editing” known as CRISPR in 2020—and an old hand at unraveling the secrets of RNA, the genetic material that guides the novel coronavirus. So when the pandemic hit, the IGI, which aims to apply genomic engineering for public good, turned its attention to stopping the virus. Their scientists, in lightning-quick collaboration with other researchers, are developing CRISPR-powered at-home tests and investigating how to harness CRISPR for antiviral treatments.

Scientists have made leaps and bounds in understanding genetic material like DNA and RNA since the 1953 discovery of the double helix. Now, these advances are propelling the global fight against the coronavirus and making plain the relevance of biotech to our lives, not just in the future but right now. Lab-made messenger RNA, after all, is generating antibodies in the arms of 90 million Americans and counting.

In 2012, 14 months after they began collaborating, Doudna and Charpentier published trailblazing research: Their labs had worked out how to harness bacteria’s innate “immune systems” to make precise cuts to genetic material, a user-friendly technique with “considerable potential for gene targeting and genome editing applications,” they wrote.

Several years after her research made headlines but before the birth of the world’s first genetically edited babies in China, Doudna spoke at an event hosted by the Aspen Institute, where biographer Walter Isaacson served as CEO. Isaacson has chronicled the lives and transformative ideas of Steve Jobs, Leonardo da Vinci and Albert Einstein, and at the time, he says, “I was looking for a way to do what I think is the next great revolution for the next 50 years, which is biotech.” Doudna’s journey, he concluded, was interwoven, much like the strands of the DNA double helix, with these biochemical discoveries and debates.

Doudna and the dawning age of the genome share central billing in Isaacson’s newest book, The Code Breaker: Jennifer Doudna, Gene Editing, and the Future of the Human Race. Like his previous works, it’s a tale of transformative ideas, but this time, the revolution is playing out in real-time, and the innovative thinker at its heart is a woman. 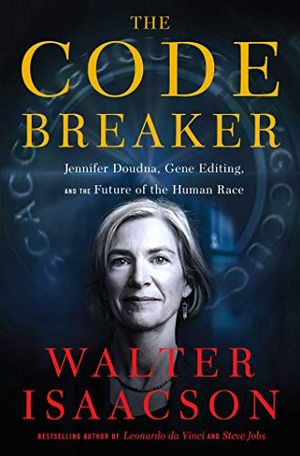 The Code Breaker: Jennifer Doudna, Gene Editing, and the Future of the Human Race

The bestselling author of Leonardo da Vinci and Steve Jobs returns with a gripping account of how Nobel Prize winner Jennifer Doudna and her colleagues launched a revolution that will allow us to cure diseases, fend off viruses, and have healthier babies.

The book’s full title might seem grandiose, but Isaacson makes a convincing case that the ability to easily alter the genetic code—which Doudna’s research on the gene-editing technique known as CRISPR made possible—really is, and will be, that paradigm-altering. Genetic editing, he explains, has the potential to cure sickle-cell anemia or stave off Huntington’s disease. But where do the lines of acceptable and unacceptable edits get drawn, and what do we do if the ability to guide natural selection veers into arguably more frivolous territory, like selecting a future child’s height? Given the already drastic differences in health outcomes between the privileged and under-resourced, not to mention the potentially high price tag of gene editing, “We could create a gene gap that would get wider with each new generation,” Doudna worries.

To make sense of the intricacies of gene editing, Isaacson starts with some foundational discoveries: how the monk Gregor Mendel’s pea plant breeding revealed heritable traits passed between generations and the academic race to puzzle out the structure of DNA. He guides readers from inhospitable salt ponds in Spain to a yogurt company lab to a Berkeley café where Doudna conferred with a colleague as scientists piece together how bacteria detect and then destroy viral invaders. Then he details how this basic science discovery led to leapfrog advances in genetic engineering, and the medical potential and ethical perils that resulted.

“I wanted to show that discovery is a team sport, and it’s also driven by very persistent, insightful people [like Doudna],” Isaacson says. “So there’s a colorful cast of characters in the book.” Vivid portraits of other scientists—full professors as well as the less-recognized postgrads whose experiments are the day-to-day backbones of labs—are sprinkled throughout the book. We meet Blake Wiedenheft, the outdoorsy Montanan researcher in Doudna’s lab who helps figure out the structure of key enzymes; Josiah Zayner, the piercing-studded biohacker who livestreams genetic experiments in which he’s his own test subject; and Feng Zhang, the affable molecular biologist who is Doudna’s scientific rival. (The Broad Institute, a biomedical and genomic research center in Cambridge, Massachusetts, paid extra to get Zhang’s patent application for CRISPR’s use in human cells fast-tracked, beating out Doudna and Charpentier and launching an ongoing patent war that Isaacson outlines.)

“They’re all wonderful characters, and they all deserve their own biographies, but I wanted to weave it into a narrative of discovery and sort of a detective tale,” Isaacson says.

As the main character, Doudna’s personal life and professional trajectory serve as an entry point into larger questions about science. “Her life story seemed to tie together all of the strands that I wanted to hit,” says Isaacson. Her divorce gets linked to her single-minded dedication to her research; her heated patent fight expands into a reflection on whose scientific contributions get remembered and written out of history; and her nightmare about Hitler asking her to explain how CRISPR works launches a section of the book dedicated to the ethical quandaries gene editing raises. In the wake of this dream, Doudna began to organize policy discussions about what restraints scientists should place on gene-editing experiments in humans.

Isaacson crams The Code Breaker with details cribbed from hours of interviews, court rulings, Slack channel conversations among scientists, footnotes of academic papers, and time spent being a fly-on-the-wall at conferences, all of which lend the page-turning pace of a geeky whodunit to the potentially dry fodder of lab science.

Smithsonian called Isaacson at his home in New Orleans to talk about the new book and biological innovation.

When did you first decide to write this book?

When I heard [Jennifer Doudna] talk about the moral dilemmas of CRISPR, I realized that was going to be something that our generation is going to face, and it would be useful to understand it. And the best way to understand it is to make it a journey of discovery, which means I have a central character, like Doudna, who's discovering things, and we get to walk alongside her as she makes these discoveries. There's a joy in discovering how something works, especially when that something is ourselves.

In the book, you argue that biology has become the new tech. How do the digital tech and biotech revolutions differ?

Biotech is something we can all relate to because we all are living organisms. It's also something that can't be done in a dorm room or a garage as easily as creating a social network or a personal computer. It's allowing innovation to happen in many places. In some ways, Kendall Square of Cambridge [home to a plethora of biotech companies] is a new Silicon Valley. Likewise, from Berkeley to Austin, you have main centers of biotech, and it's more international. We look at the [Covid-19] vaccines. We can see how BioNTech, a German company; Oxford University; and three universities in China are all collaborating internationally, as well as racing to make vaccines.

The last 80 pages of the book are about this cast of characters and how they're responding to the Covid-19 pandemic. How did the pandemic change this book?

When the coronavirus hit, it naturally became part of the book, because CRISPR is a system that bacteria have used for a billion years to fight virus attacks. So now we could make use of that tool in our own fight against viruses. When I started the book, I thought that biotechnology was incredibly exciting, involving colorful characters doing amazing things. By the time the pandemic hit, I realized I was understating the case. It's even more important and more relevant to our lives.

At the end of the book, Doudna, Harvard professor George Church and eLife editor Michael Eisen all say that they believe that the pandemic will make science a little bit less proprietary and hidebound in the future. Do you share that optimism?

Yes. I think that it reminded scientists that they were doing their work not simply to get patents but to help humanity. I'm an optimist enough to believe that that's one of the main motivations of people who pursue science. This was a reminder of how noble that endeavor is. I hope it inspires a new generation to realize that science can be a competitive field, but it's one in which everybody shares some of the same goals and, in the end, joins hands in ways to protect us from horrible diseases.

I am really excited about DETECTR and SHERLOCK—two at-home systems for CRISPR-powered testing, including for the novel coronavirus, being developed by teams at the Broad and Doudna’s Mammoth Biosciences company.

When Steve Jobs went into his dad's garage with his friend and created an easy-to-use computer, the Apple II, that you could just plug in and start using, it allowed the digital revolution to come into our homes and become very personal. Even if we didn't understand how microchips work, we got a feel for their power. This year, that's going to happen in biology. These home CRISPR-based kits allow us not only to detect whether we've been exposed to [the novel] coronavirus, but detect any infection, detect cancers, figure out our microbiome and how it's doing in our gut, and all sorts of things we've never dreamed of. That will not only be a huge leap for human health, it will also bring biology into our houses the way personal computers brought digital technology into our houses.

What does this book say about what it takes to be an innovator?

I think and hope that Jennifer Doudna's the model. Somebody who is collaborative, who is very persistent and competitive but knows how to bring people together. You don't have to be a tech bro at a hackathon in order to be a hero in this new age. You can be like Jennifer Doudna, or the many young researchers that I met at these conferences who have a joyful, we're-all-in-this-together spirit.