There are "pet owners" and then there are “pet parents.” For the latter, there isn’t an effort to a great or a price too high to make their little ones feel like part of the family.

Over the years, the multi-billion dollar pet market has happily catered to these truest of animal lovers, making it possible for them to spoil their precious furballs with facials and manicures at dog spas, specially-concocted fragrances and custom-designed orthopedic pet beds. Being so attached, you can imagine the separation anxiety pet parents experience when they're at work or vacationing for an extended amount of time.

To alleviate this stress, a Minnesota-based startup has invented a two-way petcam that enables both owner and pet to connect and interact remotely in a manner similar to Skype or Apple’s FaceTime. The $350 PetChatz device features a "chew-proof" intercom-sized unit with a built-in speakerphone, camera system and interactive LCD screen that can be plugged into any wall outlet.

Connected via Wi-Fi, owners would then use an app on their computer or mobile device to start a "chat" session, which can be recorded and shared with others. A special ring tone signals to the pet that someone's calling and an additional motion and sound detection system can be set up to notify parents of any activity around the house. While technically dogs or cats don’t have the ability to chat, people can use the "Greet & Treat" system to reward their pets by dispensing tasty treats and even special scents that are kept in a refillable hidden compartment. 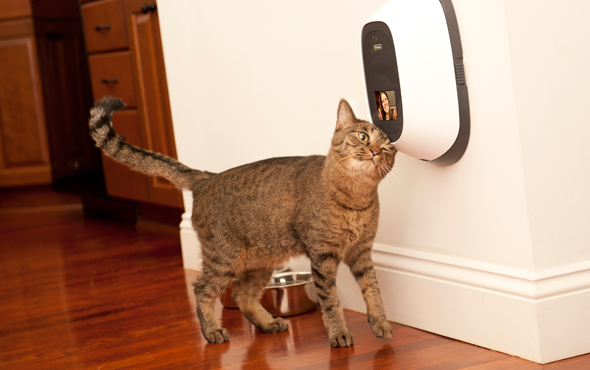 PetChatz was created by Mark Kroll, a medical technology developer with more than 350 patents to his name. He holds the title of Minnesota's most prolific inventor. The idea came to him about a decade ago when, while he was Skyping with his daughter, the family's labrador recognized her voice and came running into the room. Kroll later collaborated with veterinary technician Lisa Lavin to to develop PetChatz and other similar long-distance technologies under a new venture called Anser Innovation.

"As a pet parent myself, I understand how strongly people feel about their pets," says Lavin, who estimates that she has spent a total of $11,200 on vet bills and $80 a month on dog food for both of her live-in poodles. "We miss them. We feel guilty when we're away on vacation and this is a way to alleviate that separation anxiety."

If there is one aspect of these extravagant pet parenting products that some might find troubling, other than the cost, it's that promoting them involves a great deal of anthropomorphizing. Though dogs and cats are intelligent, they still aren't human, and treating them as such hints at a kind of resolute denial to accept the fact that they may not even enjoy being the benefactor of pricey skin treatments. Some experts think its a stretch to believe that the critter on the other end even recognizes a person being displayed on a screen.

"This product introduces the potential for interaction between the dog and the technology," Margaret Duxbury, an animal behavior professor at the University of Minnesota, told the Star-Tribune a year ago. "It will certainly be disappointing if the dogs don't respond at all [to PetChatz]. Perhaps they will respond to the voice but not recognize that the picture is of their owner. Does that even matter if they respond to the voice?''

Lavin claims that the company has since tested the device, with pet and human subjects, and discovered that pets can be easily trained to at least recognize the ring in a manner similar to a Pavlovian response. (Some animals have even been trained to be government spies.) As for whether a pet knows who's on-screen, she says that would depend on how much visual technology the pet has been exposed to.

"What we found was that the pet who spends a lot of time watching TV is more likely to be compelled to recognize your image on the screen and follow commands than one who doesn't," she says.

What's important, she emphasizes, is that this device does more for the emotional welfare of the owner than for the pet. If there is any benefit for the pet (besides food), she adds, it's that the pet, especially dogs, receives some stimulation during the day, which animal behaviorists agree can do wonders for their well-being.

PetChatz is slated to be available for purchase on the product's website and at select independent pets stores nationwide during the first quarter of 2014. For now, the company is taking pre-orders for the device. Packets of special treats and essential oil drops will also be available in the near future.