For mathematician and "mathemagician" Arthur Benjamin, the best way to illustrate the basic concept of algebra is with a little magic trick: "Think of a number between one and ten. Now, double it. Add ten. Then, divide by two. Subtract the number you started with originally.”

Then, he explains why the trick works: "Let's call the number you started with n—and right away, we've achieved the major goal of algebra, which is the concept of abstraction, using a letter to represent a value that we don't know. First, you doubled the number, so you had 2n. Then, you added 10, so you had 2n + 10. After that, you divided the number by 2. When you divide 2n + 10, you get n + 5. Finally, when you subtract n—no matter what number it is—you're left with 5."

That's just one example of how Benjamin, who is well known for his magic shows in which he performs mental calculations at lightning speeds, demonstrates the fun and fascinating aspects of math in his latest book, The Magic of Math: Solving for x and Figuring Out Why.

"Many mathematicians say that math exists without humans. But Arthur epitomizes the social strain of math that involves sharing ideas with people and converting young people, getting them interested in math by reminding them it's a cool subject," says Paul Zeitz, professor in the Department of Mathematics and Statistics at the University of San Francisco. "Even when he gives math talks without magic, he's amazing at captivating an audience. He's done more for math than most people do in their entire careers." 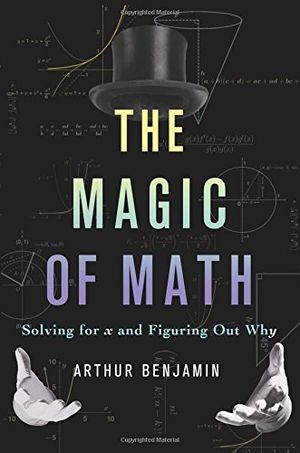 The Magic of Math: Solving for x and Figuring Out Why

"The Magic of Math" is the math book you wish you had in school. Arthur Benjamin empowers you to see the beauty and simplicity of formulas that once left your head spinning.

Benjamin, a mathematics professor at Harvey Mudd College, became a "mathemagician" by accident, beginning the '70s. Growing up, he was an avid follower of the prolific popular mathematics writer Martin Gardner, reading books such as Mathematical Carnival and completing Gardner's puzzles in Scientific American. He started doing magic shows for kids while he was in high school, which then grew into shows for adults, featuring feats of mental agility that were less challenging than they appeared. Benjamin was good at doing quick math in his head, so he added that to his shows and developed various techniques for doing fast math in his head—the same way many others had.

"What made me different was I had a knack for performing on stage," he says. After finishing graduate school in 1989, he settled in southern California and started performing again, earning a coveted spot at The Magic Castle in Hollywood, a clubhouse for the world's best magicians. Twenty-five years later, he's still performing, at roughly 75 events a year—a full-time job, in addition to his full-time teaching.

"I learned how to be a good teacher through my early experiences as a magician," he says. "My approach to teaching has always been, 'How do I make this material entertaining?' Math is a serious subject, but that doesn't mean it has to be taught in an overly serious way."

In The Magic of Math—his first high-profile release since 2006, when he wrote the popular Secrets of Mental Math—he explains why “9” is the most magical number, offers some mental math shortcuts, and shares his technique for figuring out the day of the week for any date of the current or upcoming year. "I want people to have two reactions to each exercise, or trick," he says. "First, I want them to say, 'Cool!' and second, I want them to ask, 'Why?' "

Both the fun and the explanations are often missing from math instruction in today's schools, according to Benjamin—despite the fact that so many people are calling for better education in science, technology, engineering and math (STEM). Frequent testing leaves little time for exploring math for the sake of beauty and pleasure, and students are often told they need to learn math skills only because they'll need them in future math classes. "I don't like delayed gratification," Benjamin says, "especially when the answer never comes. Math needs to be made relevant."

Another problem is that many teachers don't love math. "It's hard to fake a passion for math," he says. "A lot of elementary school teachers are math-phobic and I worry they are passing on those phobias to students. You can't expect students to be more excited about math than their teachers are." Yet, there are barriers that keep people who truly love math—such as math and engineering majors—from going back to classrooms as educators. "I wish we could do more to attract the best and brightest math students to teaching, and give great teachers more money and more respect," he adds.

In his 2009 TED Talk, Benjamin suggested that high school students should be taught statistics rather than calculus and he still advocates for this approach. While calculus is currently a must for students seeking acceptance to competitive colleges, "I would rather see the typical high school graduate have a good understanding of probability and statistics," he says. "Unless students are going into engineering, science, math or a related field, they're not going to use calculus in their daily lives, but probability and statistics are around us everyday, when we're reading the newspaper or making financial decisions. Data surrounds us, and the more you understand it, the better off you will be."

Keith Devlin, executive director of the Human-Sciences and Technologies Advanced Research Institute (H-STAR) at Stanford University, agrees: "Calculus is a totally inappropriate summit course for high school. Most students at that age do not yet have enough other mathematics beneath their belts, or sufficient mathematical maturity to do it properly."

Overall, Benjamin hopes that someday students will have more options, and less of a prescribed track, when it comes to studying math. "I believe that will allow a love of math to grow, and not be decimated," he says.

He hopes The Magic of Math will be a resource for students, parents, teachers and adults who are curious about math. At the end of the book, in a section called "Aftermath," he recommends other resources such as Kahn Academy, The Art of Problem Solving and videos by Numberphile. He says, "There are a ton of popular math books out there right now, perhaps because people are looking outside of the education system for fun math. If mine is the only math book you ever read, then I have failed."