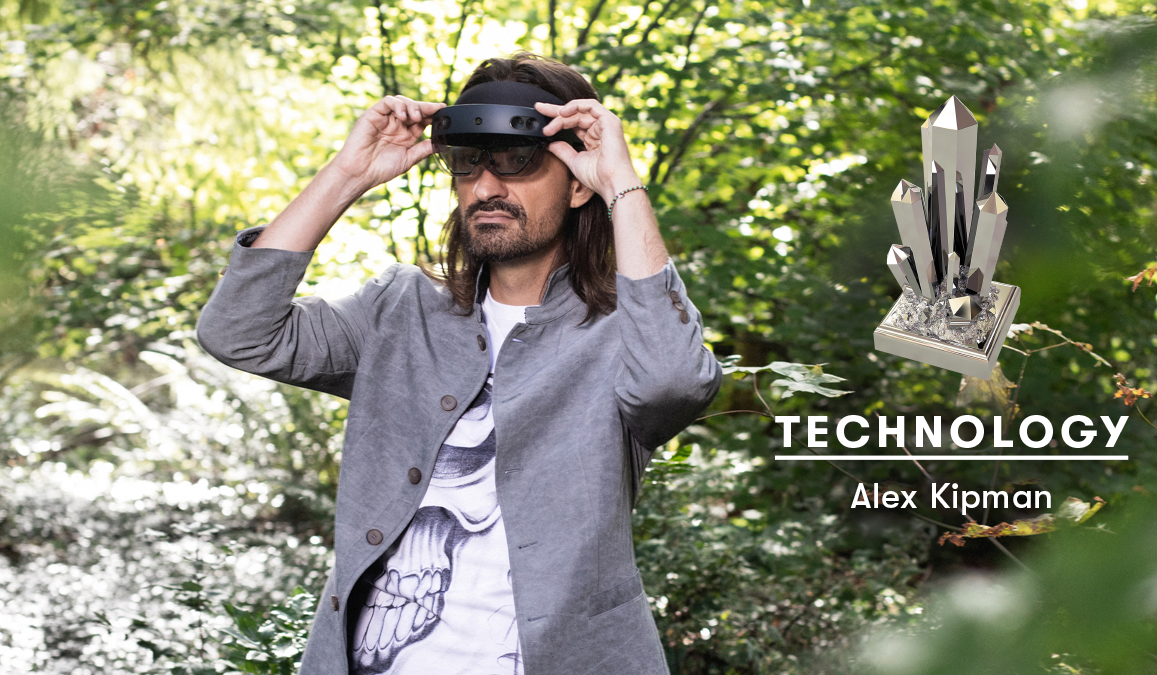 Kipman's invention, the HoloLens 2, could shape the future of work. Annie Marie Musselman

I’m in Redmond, Washington, in a room at Microsoft, pondering an all-terrain vehicle that has a busted engine. I have no idea how to fix it. I’ve never done engine repair before.

But I do have some help: On my head, I’m wearing the HoloLens 2, Microsoft’s “augmented reality” device. It has a see-through visor, almost like the one on a motorcycle helmet, and the HoloLens projects images onto the visor so they appear to float in the air before you.

When I look at the vehicle, the HoloLens flickers to life, and a guide to fixing the engine pops up in the air. A blue arrow points at a tableful of tools, and when I walk over to it, the arrow indicates that I should grab a torque wrench. Once I take that tool, a new arrow appears, beckoning me across the room to a case of bolts. I grab a bolt, and a third arrow shows me where on the engine to install and tighten it. In under two minutes I’ve completed the repair.

The sensation is bizarre, like living in a world of Harry Potter magic. I can even touch the holograms. While I’m doing another repair job, a virtual screen with the face of a remote mechanic materializes before me to talk me through the job. The screen is in my way, though—so I grab it by the corner with my fingers, right there in the air, and drag it off to the side.

It’s weird. It’s fun. And it is, argues Alex Kipman, the Microsoft engineer who invented the device, the future. “I have no doubt that devices like this are going to be the pervasive way of interacting with technology,” he tells me. Around Microsoft, Kipman is famous for pushing these sorts of oracular, sci-fi visions. “It’s kind of inevitable,” he shrugs. “It’s almost obvious.”

I met Kipman in his office, where he was wearing a gray sport coat over a T-shirt with an icon of pixellated sunglasses. He has long hair and a beard and when he talks he fixes you with an intense, Delphic gaze. The glass wall behind his chair was festooned with pink doodles made by his 9-year-old daughter, and the room was cluttered with relics of his work, including a square blue robot, a drone, and a gaming computer with a high-powered graphics card. He beckoned me to sit down at a glass coffee table that was also an art object: Inside was a huge pile of sand, on top of which a magnetic mechanism rolls a ball around, tracing hypnotically pretty patterns.

It’s a Kickstarter project he backed. The pattern it’s drawing is from software he wrote, he added. “I created a generative AI algorithm that overnight will scour the internet, and, like, dream the internet—and in the morning whatever the AI created, it puts it on the table.”

Kipman grew up in Brazil, got turned onto software by playing with his family’s Atari 2600 console, and after studying computer science at Rochester Institute of Technology, joined Microsoft in 2001 as a wunderkind. He toiled for years on Vista, Microsoft’s 2007 train wreck of an operating system. Then he shifted into hardware, leading a team to create the Kinect, a newfangled 3-D camera that plugged into Microsoft’s Xbox gaming system and tracked players’ body movements, allowing them to control a game by moving their limbs. It was a hit, selling 35 millions units, and it fired his enthusiasm for reimagining how we use computers.

He assembled another team to build the first HoloLens, which was released in 2016 to surprised enthusiasm. Surprised because augmented reality (or what Microsoft calls “mixed reality”) had recently seen a hostile reaction to Google Glass, a computer and camera mounted on an eyeglasses frame, which critics derided as too creepy and intrusive for everyday life. (People who wore the device were called “glassholes.”) To keep the HoloLens from falling into the creepiness pit, Kipman pitched it as a tool not for socializing but for working. He imagines an airplane mechanic in Japan using the HoloLens to summon a Rolls Royce engineer to help diagnose a busted engine, or a surgeon having hands-free, holographic access to a patient’s X-rays and medical history in the operating room. (Indeed, the recently reborn Google Glass also aims at industrial uses.)

Crafting the HoloLens required feats of miniaturization. One prototype “was like wearing a scuba thing,” laughs Ori Amiga, who develops software for HoloLens. It was shrunken down small enough to wear on your head, but people still complained that it was heavy, and the screen area where holograms appeared was narrow.

For HoloLens 2, Kipman and his team invented tiny mirrors that vibrate 12,000 times per second, generating holograms twice as wide as before. They upgraded to carbon fiber for the device’s body, which is half as heavy as aluminum and far more rigid. The carbon fiber also helps stabilize the delicate electronics in the headset, including dozens of sensors that track exactly where your head is turning or where your arms are. “And I’m talking like micron precision, right?” Kipman says. “Nanometer precision.”

Engineering on that vanishingly small scale is what allows Kipman to think big. His ultimate goal: Replace every screen, from smartphone to tablet to monitor, with the HoloLens or one of the next versions of it. “Why would I have my computer if I have infinite monitors in front of me?” he says. “Why would I have a phone?”

Granted, that vision is still years away. HoloLens 2 is a leap in technology from its predecessor, but “we’ve got a ways to go before we’ve got something that you can wear all day,” Kipman says. Eventually, he figures it’ll be as compact as a normal pair of horn-rimmed glasses. By then, perhaps its sheer ubiquity in the workplace will make it seem acceptable in social life. “You wear them all day,” he says.

When I said goodbye, Kipman argued that if he’s really successful, a reporter like me wouldn’t need to fly to Seattle to talk to him. We could use HoloLens to speak with the intimacy of being in the same room—a sort of supercharged version of Skyping. But why stop there? Maybe, he mused, artificial intelligence will advance to the point that neither space, nor time, nor anything else on this earthly plane can limit whom we speak to, as AI versions of people are preserved and available at a dial for chatting via hologram.

“Wouldn’t it be nice,” he laughed, “if you were in your home, and I had been dead a hundred years, and we were having this conversation?”