The men of the “Portuguese Company,” about a dozen in total, arrived in 1850s Manhattan ready to bring the illegal slave trade to America’s mega-metropolis. Hailing from Brazil, Portugal and Angola, the group earned their moniker from their common tongue. They were attracted by New York’s large port, with ample ships and sailors, as well as the city’s vast financial services and lax law enforcement. Posing as merchants in legal business, the Company snapped up hundreds of ships to send to Africa for captives and then to the sugar estates of Cuba. The Company would traffic thousands of Africans for their own enrichment, but they also crossed Cuban immigrant Emilio Sanchez, whose spycraft for the British government would prevent thousands more from enduring the Middle Passage aboard American slave ships.

Sanchez’s turn to informant is just one example of how fighting slavery was a collective effort. A wide cast of characters, from the great orators of the abolitionist movement to the conductors of the Underground Railroad to men like Sanchez fought against the institution of slavery and all its components, including the illegal international slave trade. Their work was dangerous, their foes were powerful – even in the “free” North – and the U.S. government was rarely on their side.

Americans had a long history of ignoring slave trade laws. Despite a federal act in 1807, which banned U.S. participation in the Atlantic slave trade, and another law in 1820, which carried the death penalty, American seamen and vessels remained deeply involved in the traffic to Cuba and Brazil, where the trade was also banned.

In New York, key officials like U.S. Marshal Isaiah Rynders were notoriously sympathetic to slave interests and several took bribes from traffickers to let ships sail out to sea. When slave traders did end up in court, juries rarely convicted. At the federal level, successive Democratic administrations were more interested in preventing the abolitionist British from searching American ships at sea than halting the slave trade. 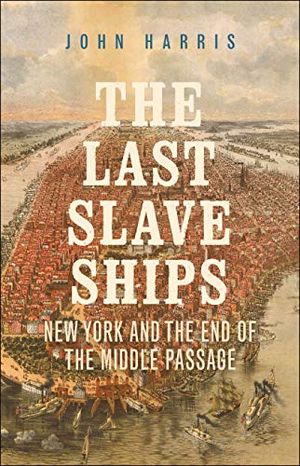 The Last Slave Ships: New York and the End of the Middle Passage

As American law enforcement remained lax, the Portuguese Company became prolific. One observer with knowledge of the trade wrote in 1856 that “the business is active and pretty steady, not less than two, or three or four vessels getting off every month from New York alone.” There was no shortage in help getting out to sea, he explained, since “gold is generally paid down on the spot for all supplies and services [and] bribery is largely employed, and is relied upon as a sure and successful mode of getting the vessels off.”

Meanwhile, the Portuguese Company thrived. By the late 1850s, they even branched out to other cities like Boston, Baltimore and New Orleans. In all, over 400 slave ships sailed out of U.S. ports bound for the African coast and brought close to 200,000 captives back across the Atlantic Ocean, mainly to Cuba, although some like the Clotilda ended up in the American South. A host of accomplices in American ports—captains, seamen, corrupt officials, ship dealers and merchants supplying provisions for their vessels—also feasted on their ill-gotten gains.

The British government looked on in horror. Previously one of the biggest slave trading nations, by the mid-1800s Britain viewed itself as the world’s beacon of liberty and sent an antislavery fleet to African waters to patrol for illegal slave ships. With strong American opposition to naval interference and lacking solid information on which to base captures, there was little they could do. Meanwhile, the British consul in New York, Edward Archibald, was also stumped. Even when he could learn snippets about the trade, he told his bosses in London that it was “worse than useless” to share them with local authorities.

The British had experience, however, with stubborn slave trading nations. For many years they had channeled money to Brazil and Cuba to pay spies—usually slave traders who had turned their back on the trade, or at least claimed they had. Now it was time to try that tactic in New York.

Emilio Sanchez, who had come to the U.S. in his youth, was an ideal informant. A sugar importer and ship dealer who worked in New York, he operated cheek by jowl with the slave traders and their accomplices in the merchant district of Lower Manhattan. He also had an axe to grind; he had been caught up in one of their failed voyages—unwittingly, he claimed—and had ended up with a bruised reputation and depleted finances. Archibald grilled him on his past dealings and came away convinced that Sanchez had indeed been duped.

Sanchez wanted to be a spy to wreak revenge on the slave traders who had drawn him into their dealings—and he wanted to make money doing it. But although he was never explicit about it, he seems to have had a broader ideological motive. A few years later, he wrote anonymously in the New York press, attacking slave traders and corrupt officials, and making clear his intention to “destroy the slave trade” as a whole.

Archibald was certainly impressed by Sanchez when he met him, and sensing the Cuban immigrant could be useful, he offered him a contract. From 1859 to 1862, Sanchez acted as a full-time informant for the British, working for £400 a year plus bonuses based on captures resulting from his information.

Sanchez worked hard. He ventured onto the docks, mingling with other merchants, sailors, caulkers; anyone who might have news. He struck up what he called “casual conversation” with these men, but he was hard at work, plumbing for information. What ships were leaving for Africa? When? Who owned them? Sometimes he backed off, worrying he would “expose” himself to suspicion, but he gleaned plenty of intelligence. He also thumbed through a dozen newspapers from New York and elsewhere, searching for information on ship departures and arrivals, vital clues on the whereabouts of slavers. He even recruited his brother back in Cuba to write to him about the island’s trade, which was always closely tied to New York’s.

The result was an incredible paper trail. Sanchez wrote detailed letters to Archibald, sometimes several times a week, with the latest news. Most of his letters concerned the names of slave ships and their owners, as well as their whereabouts. A typical letter from 1859 reported a slaver disguised as whaling ship—an occasional ruse of the Portuguese: “Laurens: owned by Lima Viana, a Portuguese in New York…fitted out [as] a whaler under the command of [captain] Curtis.” In the same letter, he also informed Archibald that the Asa Fish had recently left New York “loaded by a Portuguese and cleared … for Porto de Lenha [Africa]” where it would “take in a cargo of slaves.”

Sanchez scribbled at least 178 hundred missives in total. Fearing for his life – with good reason – he often wrote in cypher and never signed his name. Archibald was amazed by this correspondence. A few months into his work, the consul told in superiors in London that Sanchez had been in “almost daily communication” with him, supplying “detailed information of the movements of no fewer than fifty [slave trading] vessels.” Archibald was convinced that this information was derived on “extensive and authentic sources of intelligence.” He was right; in all, Sanchez reported on four in every five slaving voyages that crossed the Atlantic Ocean during his tenure as a spy. Aside from the slave traders themselves, no-one knew the traffic better.

Once Sanchez’s letters reached Archibald, they began an extraordinary journey. The consul quickly spirited them out of New York aboard steamships bound for England. In London, the Foreign Office and the Admiralty reviewed them and sent them on another steamer, a mail packet that linked up with the British fleet off the African coast. The whole journey from New York to the British vessels off the Congo River, where the trade was centered, typically took ten weeks.

The arrival of the letters gave the British squadron a crucial advantage. Because Sanchez often reported slave ships before they had departed the United States and since they were usually sailing vessels that took a long time to reach Africa, Sanchez’s intel often made it to the Congo River before the slavers arrived. Armed with Sanchez’s letters, including a description of incoming ships, the British knew what to look for and lay in wait. When they found the slavers lurking on the coast, they gave chase.

One of these vessels was the Pamphylia, a small sailing ship built in Maine that the Portuguese Company had purchased in Boston and ran out of New York. It arrived near the Congo River late in 1859, successfully evading the British on its inbound voyage. On a remote beach, the slave traders forced over 600 men, women, and children aboard. But as they tried to sail into the Atlantic Ocean, a British cruiser approached. Its commander, who had Sanchez’s information at hand, recognized the Pamphylia and fired at the ship until it surrendered. Thanks to Sanchez’s notes, the voyage had failed.

The capture of slavers like the Pamphylia was a blow against the slave trade. Overall, the British intercepted around 30 slave ships on Sanchez’s information; some already carrying captives, others not. About 20,000 Africans avoided the crossing to the Americas, and the full misery of the middle passage. But the story was not a bright one for intercepted Africans; rather than being freed immediately, the British sent them to work temporarily as indentured laborers in the British Caribbean, thousands of miles from their homes. Meanwhile captured traders were typically dumped on the African coast, the British having neither the jurisdiction to prosecute them, nor the confidence that handing them over to American authorities would result in any action. Slave ships continued to stream out of New York.

But as Sanchez labored on into the 1860s the tide was turning. Newly elected President Abraham Lincoln chased the slave traders out of Manhattan and initiated a treaty that finally allowed the British to search American ships. These efforts not only ended the slave trade in the United States, but helped close the trade to Cuba as well. The traffic withered and died within a few years.

These developments also ended Britain’s need for Sanchez. After refusing to pay him what he was due, the British cut him off in 1862. Embittered, Sanchez returned to his old work as a merchant in New York and New Jersey, where he lived modestly until his death 1901. His never spoke publicly about his work as a spy and seemingly took his secret to the grave.

Sanchez’s story and his spy letters—today housed in the British National Archives in London—are largely unknown to historians and the wider world. But the broader narrative is not entirely new. As historians look more closely at antislavery efforts across the United States and beyond they are seeing that people fought slavery with various motivations and in many different ways. Enslaved people were always at the center of that story, as were key figures like Lincoln or Frederick Douglass. And in the case of the illegal slave trade, so too was a Cuban immigrant, who labored night and day to bring the scourage of the Middle Passage to an end.