This year’s clashes between protestors and the police from Portland to Atlanta to Kenosha are the latest flashpoints in the long history of policing in America. While the police today emerged from a hodge-podge of national and international iterations, one of the United States’ earliest and most storied forces, the New York City police, offers modern Americans a lesson in the intractability of problems between the black community and the officers sworn to uphold the law. That long history is both bleak and demoralizing. But this past also reminds us that real change will only happen by learning from the collective American experience, one in which those who supported systems of oppression were met by others who bravely battled against them.

As the nation’s most populous city for most of its history, New York has been uniquely affected by this dynamic. In the decades before the Civil War, when Gotham’s police force was becoming regularized and professionalized, Manhattan routinely erupted in riotous violence over the very meaning of equality. 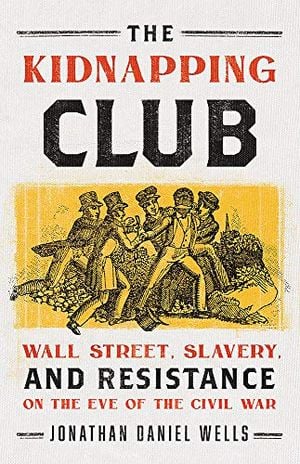 The Kidnapping Club: Wall Street, Slavery, and Resistance on the Eve of the Civil War

In a rapidly changing New York, two forces battled for the city's soul: the pro-slavery New Yorkers who kept the illegal slave trade alive and well, and the abolitionists fighting for freedom.

No one individual embodied the brawling roughness of New York policing like Captain Isiah Rynders of the U.S. Marshals. Born in 1804 in the Hudson River town of Waterford, New York, Rynders was a gambler on Mississippi River steamboats. He reportedly killed a man after a card game and fled to his home state around 1837. Known for his thunderous voice, a powerful memory, and a penchant for histrionics, Rynders made an immediate impact on New York City. Black New Yorkers became his main target, and for decades, he patrolled the streets looking for runaways who had escaped enslavement in the South and who, against tremendous odds, had found freedom in Manhattan.

The Constitution’s Fugitive Slave Clause required northern free cities like New York to return the self-emancipated to their southern enslavers, and the NYPD and officers like Rynders were only too willing to comply, conveniently folding their hatred of black people into their reverence for the nation’s founding document. Armed with the founders’ compromise over slavery, Rynders and his fellow officers, men like Tobias Boudinot and Daniel D. Nash, terrorized New York’s black community from the 1830s up through the Civil War.

And, even worse, it often mattered little whether a black person was born free in New York or had in fact escaped bondage; the police, reinforced by judges like the notorious city recorder Richard Riker, sent the accused to southern plantations with little concern and often even less evidence.

Thanks to Rynders, Boudinot, and Nash, the New York police department had become an extension of the powerful reach of southern slavery, and each month—and often each week in the summer months—brought news of another kidnapping or capture of a supposed runaway. Black New Yorker John Thomas, for example, was claimed by an enslaver from Louisville, Kentucky. Thomas purportedly fled slavery along the Ohio River, then travelled through Canada, and ultimately found a job as a porter in a Manhattan hotel. In late 1860, Thomas was arrested as a fugitive by the Manhattan police. While in prison, Thomas hastily drafted a note, dropped it out his cell window, and asked a passing boy to give the note to his employer, who submitted a writ of habeas corpus.

Unfortunately, the marshal on duty was none other than Rynders, who produced a different black man in response to the writ, and the judge declared the writ satisfied. In the meantime, Thomas’ employer and friends learned, too late, that one of Rynders’ deputies had taken the real John Thomas to Richmond, where he would be transported to Kentucky, lost in the darkness of American slavery, like untold numbers of other kidnapping victims.

Fortunately, New York’s black community was not without heroic defenders like David Ruggles, the tireless activist and journalist. Ruggles led the city’s antislavery community while the likes of Rynders, Riker, Boudinot and Nash, a group so wicked that Ruggles had labeled them “the kidnapping club,” patrolled the streets and docks in search of their next prey. Joined by activists like Horace Dresser, Arthur Tappan, Charles B. Ray and other antislavery protestors, Ruggles fought relentlessly against those officers and marshals who threatened black liberty. Just as modern protestors decry the role of the police in the quest for order, black and white activists in pre-Civil War New York claimed that the force was little more than a vigilante expression of the worst tendencies of white residents. A more professionalized police force, however, did not mean one more suited to the protection of black civil rights. On the contrary, in the early 1800s, the police proved sadly and persistently indifferent to the black lives they were supposed to protect.

By modern standards, the early NYPD was a ragtag band of barely organized and only partially trained officers. The daytime police remained inadequate to deal with the robberies, violence, prostitution, gambling and other crimes of a city approaching 300,000 people in the 1830s. Only 16 constables, elected by citizens of each ward, along with about 60 marshals appointed by the mayor, patrolled the city. Only constables and marshals had the power to arrest under a magistrate’s orders. Armed with warrants issued by Riker, marshals like Rynders could terrorize Gotham’s black residents, who came to fear the police presence in their neighborhoods.

Part of the fear emanated from the fact that Rynders’ confederates Boudinot and Nash did not wear uniforms or carry any kind of badge signifying their authority. The familiar dark blue uniforms of the NYPD were not instituted until the 1850s, so African Americans harassed or arrested by the police could not even be sure that they were being accosted by legal authorities. Equally problematic was the fact that neither Nash nor Boudinot earned regular salaries on which they could depend; their ability to support themselves and their families came from fees set by state law, which virtually required officials to arrest as many people as possible. The situation almost guaranteed corruption, and tied the financial interests of the New York police force to the financial interests of southern slaveowners. Not that they needed any push to over-police the black community, but patrollers like Nash and Boudinot had every incentive to use their blanket writ to arrest as many accused fugitive slaves as they possibly could. In fact, their financial well-being depended on it.

Boudinot and Nash operated almost like independent agents in a police force that was itself in disarray, an institutional chaos that only rendered Black lives even more vulnerable. Fernando Wood, elected mayor in 1854, controlled the police department and relied heavily on Irish immigrants to man the force. But by the 1850s, anti-Irish politicians were trying to establish a new police force, soon to be called the Metropolitans, that would replace Wood’s Municipals. A clash erupted in 1857 when Wood refused to back down, and for months, the city actually had two competing police departments who battled each other as much as they combatted crime.

Both Wood’s Municipals and the state’s Metropolitans were guilty of malfeasance and dereliction of duty. In fact, the Municipals, led by police chief George Matsell, had been called “slave catchers” by the city’s black community and its allies in the Republican press. Matsell, a member of the NYPD since 1840, himself was suspected of corruption, and rumors spread that he extorted money from criminals, seized stolen property for his own use, and skimmed the profits of illegal activities. By the time the Municipals and Metropolitans vied for control of the New York police, Matsell had managed to build a sprawling summer mansion within a vast vineyard in Iowa, where local landmarks still bear his name. New York politician Mike Walsh labeled the heavy-set Matsell a “walking mass of moral and physical putrefaction.”

The crisis between the Municipals and the Metropolitans was only resolved when Wood and the Municipals finally backed down and the Metropolitans emerged as the city’s permanent and only official police force. Yet, the new police force proved no more respectful of black lives. Boudinot became a captain in one of the city’s main wards and Rynders became a Democratic elder statesman during and after the war. In fact, New York City, always ready to defend the cotton trade with the South, voted against Lincoln in 1860 and harbored racial conservatives like Wood during the war and after. Embodied by newspapers like The New York Weekly Caucasian, one of the nation’s most prominent promulgators of white supremacist ideology, the city remained an unfriendly place for African Americans.

One hundred and fifty years later, policing has changed a great deal, particularly in its militarization and organization, but the tensions between the nation’s black communities and the police are still very much evident. Black Americans have been fully aware of this history for generations because they have been the objects of so much of the violent quest for law and order. Although many people might assume that Riker’s Island was named after the city recorder, it appears that the name originates less from an individual and more from Manhattan’s general Dutch heritage. But though their origins may be different, both the prison and the city recorder share a similar past of neglecting the plight and suffering the New York’s most vulnerable residents.

Now, with some white Americans learning the fraught history of policing for the first time, have they come to realize that the last moments and utterances of Eric Garner, George Floyd, Breonna Taylor and untold others are but modern expressions of a deep and deadly struggle that stretches back to America’s earliest beginnings.