As Hamilton, the hit Broadway musical, tells it, Alexander Hamilton, “the ten-dollar Founding Father without a father” was a feisty, brilliant immigrant who was central to the founding of the nation. Inspired by Ron Chernow’s best selling biography, the musical has revived interest in its subject, including his tragic end in an 1804 duel with Aaron Burr. But apart from one short scene, unmentioned in the musical are the many other (nearly a dozen) challenges to duels that Hamilton meted out or received. Most of these challenges never came to firing shots, but one came especially close: a messy affair of honor with future president James Monroe.

In the heat of July 1797, Monroe was not in the best mood, having just been recalled from his post as ambassador to France amidst attacks by Federalist opponents. Getting an angry letter from Hamilton regarding events that took place more than four years earlier did not improve his state of mind. Hamilton, yet another Federalist who opposed Monroe’s fledgling Republican party, was on the offensive about an incident Monroe thought had been resolved: the so-called Reynolds Affair.

It all went back to an investigation Monroe, as a U.S. senator from Virginia, with his Republican colleagues Frederick Muhlenberg and Abraham Venable, had undertaken in December 1792. A former clerk of Muhlenberg’s, Jacob Clingman, and an associate, James Reynolds, had been jailed for their involvement in a financial scheme that involved government funds. Clingman fingered Hamilton, then Secretary of the Treasury, as a co-conspirator who had taken advantage of his position. If the charges against Hamilton were true, it would be the end of his career.

Monroe, Muhlenberg, and Venable interviewed Clingman, Reynolds and his wife Maria and discovered that Hamilton had occasionally provided James with money. The team drafted a letter to President George Washington enclosing transcripts of their interviews on December 13, but waited until meeting with Hamilton to send it. What Hamilton told the men on December 15 shocked them: the payments to James Reynolds were all part of a blackmail scheme to cover up Hamilton’s illicit love affair with Maria, and he had letters to prove it. The congressmen dropped the investigation and Monroe pledged to Hamilton that he would not return copies of any of the letters from the investigation to Clingman or Reynolds. Even in the 18th century, sexual intrigue could rock the Capitol.

Here’s where it gets even more exciting. When Clingman told Maria Reynolds that he had heard no charges would be pursued against Hamilton, she was “much shocked” and “wept immoderately.” Maria claimed that Hamilton and her husband had forged the correspondence offering proof of the affair. On the evening of January 2, 1793, Clingman called on Monroe with the news about the revelations from Maria. Monroe recorded a paragraph of notes of his conversation with Clingman, bundled together all of the papers relating to the investigation, and sent them for safekeeping to a friend in Virginia (likely Thomas Jefferson).

What Monroe did not expect, however, was that the clerk who had worked with the investigators would make extra copies and pass them off to James Callender, a gossipy journalist who made his name spreading political scandal, including the revelations of Thomas Jefferson’s relationship with Sally Hemings. In June and July 1797, Callender published a series of pamphlets that included accusations against Hamilton for financial speculation and adultery. It's unclear why Callender chose this moment to publish the attack, but Hamilton and his wife Elizabeth were convinced it was at Monroe's instigation to avenge his humiliating recall from France. Included in the pamphlets were the secret documents Monroe’s committee had collected. One Federalist congressman said the pamphlets would “gratify the diabolical malice of a detestable faction.”

Hamilton was, understandably, furious. On July 5, he wrote to Monroe, Muhlenberg, and Venable asking them to dispute the charges in Callender’s pamphlets. He didn’t blame them directly, but suspected “a dishonourable infidelity somewhere.” By July 10, Hamilton still hadn’t heard back from Monroe, but learned that he was in New York visiting family. He wrote a terse letter requesting an “interview” that insinuated a challenge to a duel: Hamilton would bring a friend (a second, in the ritual of dueling) and Monroe should, too.

The next day, Hamilton and his brother-in-law John Church visited Monroe, who was accompanied by his friend David Gelston. Both Founding Fathers were angry from the start. Fortunately for us, Gelston kept a minute account of the meeting. Hamilton again demanded an explanation for Callender’s pamphlets. When Monroe said he had sealed and sent all of the papers relating to the investigation to a friend, Hamilton countered that that was “totally false.” Monroe fumed and both men jumped to their feet.

“Do you say I represented falsely, you are a Scoundrel,” Monroe charged.

“I will meet you like a Gentleman,” Hamilton replied—a veiled request for a duel.

“I am ready get your pistols,” Monroe retorted.

The two men must have come close to blows, because Church and Gelston had to rise and separate the angry men. After everyone cooled down, Monroe promised that he and his co-investigators would write Hamilton with a full explanation of what they knew of the affair.

A week later, Hamilton got the explanation he was promised but was still dissatisfied. He focused in on the notes from Monroe’s meeting with Clingman on January 1, 1793. Did Monroe’s record of that interview mean that Monroe agreed with Clingman’s charges that Hamilton and Reynolds had created the ruse of an affair with Maria? That would suggest that Monroe believed Hamilton had, in fact, misused government funds—a far more serious charge than adultery. Monroe demurred that he couldn’t remember the meeting clearly. There followed a flurry of letters in which Hamilton demanded Monroe refute Clingman’s charges and Monroe politely avoided doing so. This wasn’t just stubbornness: Monroe still harbored some doubts about Hamilton’s behavior.

Matters escalated and, on July 31, Monroe finally told Hamilton that if his explanations weren’t enough, they could settle things in a way “which I am ever ready to meet.” This, again, could be seen as a way of suggesting a duel.

Dueling was highly ritualized, a way of settling disputes and proving one self to be a man of honor and courage, but most arguments ended before any shots were fired. The language of dueling was full of insinuations, a symbolic code providing space to claim misunderstanding and disclaim offering a true challenge. But Hamilton took Monroe’s note as a challenge and accepted it, saying his friend Major Jackson would visit to set a time and place. Was this message, Monroe asked Jackson, a challenge to a duel?

Monroe decided he needed to call on a friend as his second to help negotiate, whether for an amicable settlement or a duel. His friend of choice? None other than Aaron Burr.

Burr had known both Hamilton and Monroe for many years, but he was a political ally and friend of Monroe. He delivered a letter to Hamilton from Monroe, who claimed that he misunderstood Hamilton’s letter and denied having issued a challenge himself. Nonetheless, if Hamilton wanted to fight, he should arrange it through Burr. Monroe would just need about three months, he wrote Burr, to settle his financial affairs and make sure his wife would be provided for. It was all very matter-of-fact. “In truth,” Monroe concluded, “I have no desire to persecute this man, tho’ he highly merits it.”

It was Burr, not Hamilton or Monroe, who was convinced the pair should avoid a duel. The men were being “childish,” he felt. “The Thing will taken an amicable Course,” he told Monroe. He worked as an intermediary between the pair as they continued to write asking whether the other was actually issuing a challenge to a duel. As political historian Joanne Freeman explains it, “the two basically exchanged letters saying: “ready to fight when you are” for an extended period, until each managed to convince himself that the other was the coward.” Why persist in what Monroe’s biographer Harry Ammon called a “comic” exchange of letters? In a political culture that highly valued honor, Freeman argues, “both men were unsure about whether or not they might still be subject to charges of cowardice for backing down.”

Burr was finally able to settle the men down by mid-August 1797. But after Hamilton published a pamphlet detailing his affair with Maria Reynolds, accompanied by his correspondence with Monroe on the matter, Monroe wondered if all was truly laid to rest. That fall he asked Burr to challenge Hamilton for him and sent James Madison, another political ally, a copy of Hamilton’s pamphlet, seeking advice on a proper response. All of Monroe’s friends told him to move on, but he refused to. He continued to press his friends about whether Hamilton had challenged him and hinted at challenging Hamilton himself.

What truly ended a sequence of quasi-challenges and quasi-denials remains a mystery. In early January 1798, Hamilton wrote, but didn’t send, a letter accepting Monroe’s challenge to a duel: “I therefore acquiesce in the necessity you impose on me.” Perhaps tempers cooled, or perhaps Hamilton’s wife Eliza stopped him. Relations with France were reaching a breaking point in early 1798, a result of a dispute over unpaid debts from the Revolutionary War and French attacks on American shipping, and Hamilton could have seen an opening to reenter politics. A duel might sacrifice that opportunity. Whatever the reason, Hamilton was not destined to duel with Monroe, but rather to die at the hands of Aaron Burr—the very man who prevented that earlier clash.

While most cases of dueling followed carefully planned choreography, the story of Hamilton’s clash with Monroe is a messier affair. Dueling’s coded language could be manipulated, misunderstood, or both at once. In this affair of honor, both men were at times petty, tempestuous, and unsure of themselves: in other words, human. The closing song of the musical Hamilton has the cast asking, “Who lives, who dies, who tells your story?” Perhaps the real drama of the founding era for us today is that, depending on who gets to tell the story first, the heroes and villains are not always whom we’d expect. 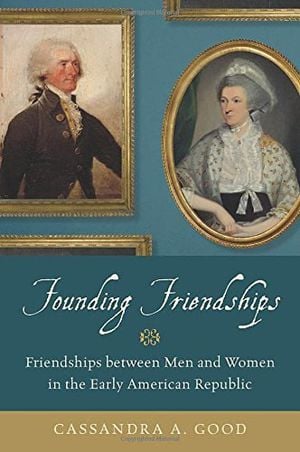