The Man Who Walked Around the World, Collecting the Autographs of the Rich and Famous

In the early 1900s, Joseph Mikulec traveled some 175,000 miles on foot, gathering 60,000 signatures in a leather-bound album that is now up for sale 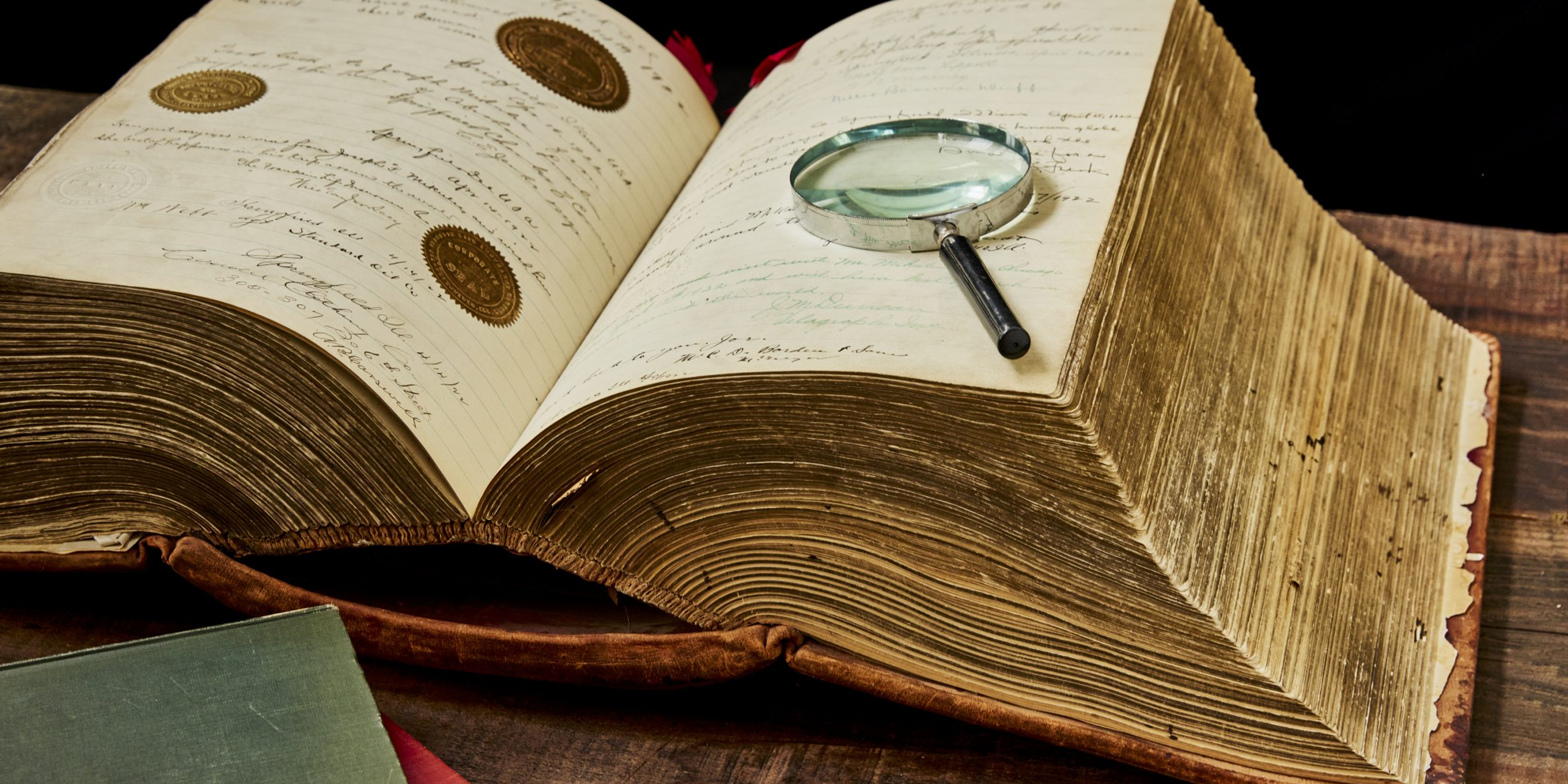 Three weeks into his journey, Mikulec stopped in St. Louis, Missouri, to give a talk on his travels. Over the past 14 years, the Croatian “hyperpedestrian” had traversed some 100,000 miles on foot, visiting 26 countries and collecting 50,000 autographs along the way. During his talk, Mikulec exhibited a roughly 60-pound, leather-bound album containing the signatures of “[m]ighty potentates and renowned athletes, great artists and fascinating wise men of far countries,” according to an advertisement in a local paper. “[M]ost of the interesting people of the earth have written their names in this book,” the notice added.

In 1922, Mikulec, also known as the “Globe-Trotter” whose toes had touched six continents, was at the height of his popularity. That year, he was featured in a Pathé newsreel that spotlighted the autograph album for a full minute. Even before the newsreel debuted, he’d been the subject of hundreds, if not thousands, of newspaper reports that followed his every footstep as he secured meetings with political leaders far and wide. But in 1929, Mikulec and his legendary autograph collection suddenly vanished from public view.

Mikulec’s life’s work only resurfaced in 2021, when Nathan Raab, a rare book and manuscript dealer in the Philadelphia area, bought the volume, along with a second, thinner book, from a local family. Raab says he didn’t know what it was at the time. He’d never heard of Mikulec, but he was drawn to the hefty volume, which was crammed with pasted-in news clippings in more than 20 languages, official seals, stamps, notes, photographs and—of course—all those autographs.

“I’ve been shocked by the amount of doors he was able to get into,” says Raab as he flips through the album’s pages, pointing out names like President Woodrow Wilson and British Prime Minister David Lloyd George. “It should be a movie. The man’s story is absolutely fascinating.”

Few, if any, biographical details of Mikulec’s life were readily accessible, so Raab had portions of the book’s handwritten annotations translated to fill in the blanks. According to the dealer’s research, the autograph hound was born into a family of poor farmers in northern Croatia on January 15, 1878. He left home around 1901, traveling to Italy and Malta before sailing to South Africa and, from there, to South America. He would later tell reporters that he’d been bitten by a snake in Argentina and gotten lost in the Brazilian rainforest for nine days, subsisting on “wild fruit.”

Contemporary newspaper accounts suggest that Mikulec arrived in America for his first cross-country trek in 1908. Early accounts depict him as a jovial, if eccentric, hiker: “Attired in a sweater of purple and bright yellow and wearing heavy brown leggings the pedestrian attracted considerable attention when he arrived in town,” reported the Canonsburg, Pennsylvania, daily. A teetotaler and vegetarian, Mikulec played the bugle and carried a knapsack containing “a scrapbook that is filled with press notices and autographs,” according to a different newspaper. This may have been a prototype for his larger ledger. Alternatively, Raab posits, Mikulec could have been using smaller booklets or quires that were later bound together.

The “Globe-Trotter” told anyone who would listen that a publishing company in Croatia had promised him thousands of dollars if he could walk 25,000 miles in five years and write a memoir of his experiences. This disclosure prompted many reporters to describe his endeavor as a “stunt” or a “wager.” Newspapers reminded readers that Mikulec could not beg or accept charity. Instead, the agreement stipulated that he had to support himself by selling postcards with his picture on them. (Examples can be found on eBay.)

Mikulec’s 1908 to 1911 expedition across the United States was so well chronicled by local newspapers that his route can be plotted on a map. At each location, certain stats were repeated or updated: how many languages he spoke (somewhere between four and nine), how many pairs of shoes he had worn out, how many pounds he had lost. He was dubbed an “Earth circler,” a “globe girdler” and the “champion long distance walker of the world.” A Boston-area shoe company used his name and likeness to sell rubber soles.

During this tour, the media focused less on Mikulec’s penchant for acquiring autographs than on his around-the-world aspirations. He managed to track down President William Howard Taft, Colonel Theodore Roosevelt and 48 governors before setting sail from California, bound for Australia, in 1911. Raab’s research indicates that Mikulec spent the next three years tramping through New Zealand, the Philippines, Japan, China, Singapore, Burma, India, Egypt, the Ottoman Empire, England, France, Germany, Denmark, Bohemia, Italy, Spain and Portugal, collecting the signatures of diplomats and dignitaries along the way.

Mikulec’s triumphant return to New York in January 1914 was hailed in the papers, but it’s unclear if he actually won the publishing company’s prize money. He launched a second tour, and this time around, his autographs became the main attraction. Instead of selling postcards as his primary source of income, he hosted presentations based on the places he had visited and the people he had met.

“He seemed to have a flair for publicity,” says Raab. “Wherever he went, whatever town he went into, he would announce his presence, and I think it had the additional benefit that people read the articles and wanted their names in the book, or he could use the articles as proof that he was legit[imate] and get audiences with people.”

World War I interrupted Mikulec’s travel plans. Now a naturalized American citizen, he remained in the U.S., staying mostly on the Eastern seaboard. Reporters tracked his movements, but at least one had tired of him, writing, “The war has halted the efforts of Joseph Frank Mikulec. … For so much, thanks. At least Mr. Mikulec will not get to Lancaster and pester us for free advertising about his remarkable but foolish performances.”

After the war ended in 1918, the “Globe-Trotter” took to the open road again, first in the U.S. and Canada and then in Europe for a short spell. He seemed increasingly intent on filling his autograph album, dropping it off at 10 Downing Street, where Lord Curzon signed it, and Buckingham Palace, where George V did not. (The English king’s immediate successors, Edward VIII and George VI, can be found among its pages.) In 1921, French authorities arrested Mikulec when he entered the American Embassy lugging a suspicious package (his book) just days after an assassination attempt on the ambassador. The traveler appeared “unkempt” and bore “all the earmarks of an anarchist,” according to two newspaper reports.

Upon Mikulec’s return to America in late 1921 or early 1922, news coverage about him became retrospective in nature, referencing his completion of a 20-year journey over, as some claimed, 175,000 miles, and indicating his wish to retire to a farm in the Midwest. But still he wandered, adding a slew of early Hollywood stars to his collection—including Douglas Fairbanks and Mary Pickford—while visiting California. In photos from this period, he appears fit yet weary, shouldering a book as cumbersome as a tree stump.

“I’m tired,” he told the New York Times in 1923. “I’ve carried this book all around the world, by pushcart, by ricksha[w], by pack mule, by rail and by ship, but mostly on my back. … I feel that I won’t be able to carry it much further, and I want to sell it.”

Mikulec wanted $1 million but would settle for $10,000, he told A.S.W. Rosenbach, the foremost dealer of rare books and manuscripts of the time. Rosenbach offered to help and also signed his name in the album, remarking, “This is probably the greatest collection of autographs in the world.” The dealer thought railroad magnate Henry E. Huntington might buy it, but the transaction never panned out.

Instead, Mikulec found his own buyer: Samuel Robinson, a wealthy Philadelphian with whom he had struck up a warm correspondence. Robinson, an immigrant from Ireland, cofounded American Stores Company, later ACME Markets. On May 28, 1924, Mikulec composed a handwritten receipt stating that Robinson had paid him $2,500 (around $41,500 today) for his “autograph book.”

Mikulec then began compiling a second book—likely the smaller of the two now in Raab’s possession. He kept writing to Robinson, sending the entrepreneur letters from Brazil in 1925 and his hometown of Kraljevo Selo the following year. In 1929, Robinson turned down the opportunity to buy a second volume. Yet when Robinson’s great-nephew, who wishes to remain anonymous, contacted Raab last year, he had two volumes on offer.

Mikulec was “quite the character,” says Raab. Whether he told a few tall tales or was merely misunderstood, information about him—and the fate of his albums—can be difficult to parse. The New York Times, for example, published a photo of him in Berlin in 1927 with an oversized autograph book. And, in 1929, he was photographed with a mammoth book and its traveling pram outside the White House, where he’d procured the signature of President Herbert Hoover’s personal secretary, Walter H. Newton. Neither photo matches the slim, ten-pound volume owned by Raab. Had Mikulec borrowed the original album from Robinson to continue enhancing it? Or was there a third volume floating around? One of the last articles available, from 1929, mentions that Mikulec had been offered $50,000 for his 56-pound log “from a widely known Philadelphian.”

After this report, Mikulec fell off the map. Raab, who is now offering the two albums for sale at an undisclosed price, says he has been unable to determine what ultimately happened to the world traveler. He might be the Joseph Mikulec living in Chicago in 1940, per the U.S. Census, but it’s proven impossible to confirm. No obituaries have surfaced, and the memoir Mikulec long promised never appeared. Still, his extra-illustrated autograph albums remain.

“It’s a remarkable undertaking what he did,” says Raab. “It’s really a cultural survey, a snapshot in time of that moment in that place, from the local banker to the king of England. It’s just everybody.”

Rebecca Rego Barry is the author of Rare Books Uncovered: True Stories of Fantastic Finds in Unlikely Places and the editor of Fine Books & Collections. Her writing has appeared in the Guardian, Atlas Obscura, Literary Hub, Lapham’s Quarterly, and elsewhere.