On the morning of July 4, 1827, residents of Boonsboro, Maryland, gathered in their town square before ascending nearby South Mountain. Their “patriotic purpose,” wrote one William Bell for the local Torch Light newspaper, was “erecting a monument to the memory” of a national hero: George Washington.

Fueled by “a spirit of zeal and ardor,” according to Bell, Boonsboro’s citizens built most of the monument in a single day, returning to the site in September to complete its construction.

“As it was raised in much haste, we cannot boast the regular accuracy of perfect beauty, yet it possesses both solidity and durability,” Bell wrote. “It has such strength as I think will preserve it for ages.”

He added, “We do not calculate that when finished, it will give this town immortal glory, but we do sincerely hope it will be the means of stirring up the fading gratitude of the people.”

Relatively obscure today, this unassuming stone tower has a unique claim to fame. Built more than 20 years before the better-known obelisk overlooking the National Mall, it was the first monument in the United States dedicated to the American president. Yet its history is checkered, punctuated by periods of neglect and even vandalism. It was only in the 1930s, at the height of the Great Depression, that the monument’s significance was fully recognized.

“There’s a personal story behind this object that is much more profound than the object itself,” says Charles Schwalbe, president of the Boonsborough Museum of History’s Board of Directors. (The museum uses an earlier variant of the town’s name, which has changed several times over the centuries.)

Records detailing the origins of the Boonsboro Washington Monument are limited. In July 1825, the Torch Light reported that the Maryland General Assembly would fund a “monument or statue to the memory of Washington” through surplus earnings from state lotteries. Exactly who proposed the structure is unclear, but it wasn’t a wholly original idea: Within days of the first president’s death on December 14, 1799, Congress passed a unanimous resolution greenlighting a public monument in his honor in the nascent capital of Washington, D.C. That project stalled due to differences in vision between the Federalists and the Jeffersonian Republicans, who objected to the extravagant nature of a proposed design; work on the famed Washington Monument in D.C. began in 1848 and stretched on for nearly 40 years, only concluding in 1884 after an intervention by the federal government.

The erection of the Boonsboro tower relied on the efforts of local citizens, not the government. According to the Torch Light, the town’s residents laid the monument’s foundation on July 3, 1827, enabling them “to proceed without delay” the following day. Around noon on July 4, an elderly reverend delivered a patriotic speech to the gathered crowd; after work wrapped up at 4 p.m., an attendee read the Declaration of Independence from the steps of the monument, and three Revolutionary War veterans fired celebratory rounds.

The original monument was a simple one, built in the shape of a small milk bottle out of rocks found at the South Mountain site. Twelve feet from the tower’s base, the townspeople installed a white marble slab that read, “Erected in memory of Washington, July 4, 1827, by the citizens of Boonsboro.”

Steve Robertson, a park ranger with the Maryland Park Service, which oversees the monument, says the tower’s primary significance is that it was built by volunteers. “The fact that it was a grassroots effort … just makes it very unique and very significant,” he adds.

Boonsboro’s tower was the first of many monuments honoring Washington in the U.S. During a wave of monument building in the 19th century, public works dedicated to the beloved president also cropped up in Baltimore, New York, Philadelphia and Milwaukee. According to a Mount Vernon blog post, “Americans [at the time] remembered Washington as the personification of virtue; a man of remoteness and gentility. … The nation’s first president was heavily identified with the well-being of the new country.”

The monument falls into disrepair

Contrary to its creators’ hopes, the first monument dedicated to Washington didn’t last long. As Robertson notes, the 15-foot tower was built without mortar to bind the stones together. By the outbreak of the Civil War in April 1861, the structure had fallen into such disrepair that only a third of it remained standing. Despite its reduced status, the monument played a small part in the conflict, making an appearance in the memoir of Confederate General Edward Porter Alexander.

During the Battle of South Mountain on September 14, 1862, General Robert E. Lee sent Alexander to investigate what he believed to be a signal station for the Union Army. After a “hard, hot climb” up the mountain, Alexander approached a group of people gathered at the tower, which he theorized had originally been built for a windmill. Instead of capturing enemy spies, he found himself face to face with locals who had gathered to watch the battle. “Quite disgusted at [their] peaceful character,” Alexander wrote, he “pushed on to the front and right, toward the firing.”

While the monument may not have been used as a Union outpost during the Battle of South Mountain, Robertson notes that it became a signal station following the Battle of Antietam on September 17, 1862. In areas where Confederate troops cut local telegraph lines, Union soldiers were forced to communicate through coded flag motions.

Per the Maryland Department of Natural Resources, the first campaign to restore the monument took place in 1882, when a local chapter of the Independent Order of Odd Fellows—an organization dedicated to bettering communities—helped finance repairs. Rededicated that August in front of a crowd of 5,000, the revamped monument deviated from the original design, adding whitewashed walls and a steel observation tower.

By December 1906, the monument was once again in ruins. According to the Baltimore Sun, a lightning strike several years earlier “so badly shattered” the tower that half of it collapsed. Alternatively, Schwalbe cites a local rumor that a father who suspected his daughters of meeting their suitors at the site blew it up with dynamite.

Another Maryland newspaper, the Herald-Mail, reported in May 1916 that vandals had “torn or blown out” a large section of the monument. “It is supposed that mountaineers steal dynamite and do it out of amusement, however hard it may be for people of sane minds to see fun in such actions,” the writer noted, adding, “Why any person should wish to destroy or deface a historical structure is beyond comprehension.”

To locals, the need for a second restoration campaign was clear. As the Baltimore Sun wrote in 1906, “[The monument] is not only a memorial to Washington. … It is equally a memorial to the patriotic spirit of the Marylanders of 1827 whose ardent hearts conceived it and whose strong hands built it.” But efforts stalled due to concerns about funding and a lack of interest outside of the immediate Boonsboro area. In August 1922, the Washington County Historical Society (WCHS) purchased the monument and an acre of surrounding land. Then, in 1934, the society presented the site to local officials for development as a state park.

The 100th anniversary of the tower’s construction fell between these milestones, arriving on July 4, 1927. That morning, the Herald-Mail reported, two Boonsboro residents climbed to the top of South Mountain, where they placed a wreath and a flag next to an “almost shapeless mass of masonry.” This simple act marked the only recognition of the centenary.

“The rough pile stands today almost a forgotten sentinel on the road to the west, the road taken by so many thousands of pioneer feet since its erection,” the newspaper noted. “It has watched the world pass on unheeding for a century.”

By 1934, Boonsboro citizens led by Mayor (and WCHS President) H.S. Bomberger had purchased ten acres of land surrounding the monument. They subsequently deeded this property to the State of Maryland, which combined it with the acre bought separately by the WCHS to form a state park. The Civilian Conservation Corps (CCC), a program created in 1933 by President Franklin D. Roosevelt to provide jobs for young men, took the lead on the project, which sought to restore the tower’s original 19th-century design: “a circular structure with a railing around the top where persons may take in the beautiful landscape spread for miles beneath it,” according to the Morning Herald.

Restoring the Boonsboro monument was the first task undertaken by workers at Fort Frederick, one of 30 CCC camps in Maryland. In addition to rebuilding the structure (this time with mortar to strengthen the walls), CCC workers constructed a caretaker’s house, a foot trail and several visitor shelters. Ultimately, the restoration required 670 tons of sand and 1,000 barrels of cement—a fact that led George L. Schindel, then-superintendent of two state parks, to declare, “Nothing short of a bomb will ever destroy the monument again.”

Work concluded in 1936, with a third dedication ceremony held on July 4, approximately 109 years after the tower was first built. Speaking to a crowd of several hundred Boonsboro residents, H.C. Byrd, president of the University of Maryland, said, “In dedicating this monument, we are not so much dedicating a pile of cold stones as we are dedicating ourselves to the perpetuation of certain ideas of government and the relationship of government to its people.”

The decades following the CCC restoration brought several welcome developments for the long-overlooked monument. The tower’s original cornerstone resurfaced in 1952, when a retired Army officer revealed that he’d found it while digging in a rubbish pit at the site some 20 years prior. In 1972, the monument was added to the National Register of Historic Places, and in 2017, Boonsboro citizens rededicated it for a fourth time.

During the 2017 ceremony, locals retraced the steps taken by Boonsboro residents of centuries past, gathering below South Mountain on a hot, sunny day before proceeding up a path toward the monument. Reenactors dressed in Revolutionary War uniforms fired salutes, and a fife and drum corps played music.

“It was dignified,” Schwalbe says.

The sense of gratitude and pride that Bell hoped the monument would spark remains strong among the people who watch over the tower to this day. Robertson, for his part, says he prefers the Boonsboro monument to the more famous one in Washington, D.C.

“I’ve never been up to the top of [that] Washington Monument … so I don’t know what the view is like, but I would imagine that the view from up there is probably a lot of the sprawl of Washington, D.C.,” Robertson adds. “If you go to the Washington Monument here … you can really see a long distance. And it’s not just looking at cities and picking out other monuments and memorials.”

He continues, “It’s one of the best overlooks along the Appalachian Trail.”

When Schwalbe looks at the Boonsboro monument, he thinks of the people who first built it. “I can’t help but be so impressed by the fact that these people that were working day and night … had the passion to do this,” Schwalbe says. “I’m so glad that over the years, people that have come before us preserved it, instead of just letting it fall further and further and further into rubble as many things do.” 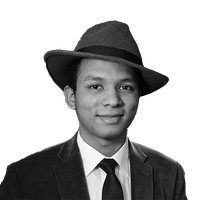 Dorvall Bedford is a freelance reporter based in Washington, D.C. His work has appeared in several publications, including the Oklahoma Eagle, DCist and Washington City Paper.