Theodore Roosevelt was famously possessed of such formidable natural energy that he was known at Harvard as a “locomotive in human pants.” But something else might have fueled his vigor. As a sickly child, he was given strong cups of coffee—along with puffs of cigar—to ease his terrible asthma attacks. As president, he was so devoted to the stuff that his huge custom coffee cup was described by one of his sons as “more in nature of a bathtub.”

So perhaps it’s not a jolt to learn that his sons Kermit, Ted and Archie, along with daughter Ethel, her husband, and TR’s cousin Philip, opened a chain of coffeehouses in New York City. Long before goateed baristas pulled single-origin shots in Brooklyn, and many decades before Brooklyn native and Starbucks mogul Howard Schultz got the idea to bring European coffee culture stateside, the Brazilian Coffee House, in Midtown Manhattan, was intended to bring quality coffee and a sociable public space to harried New Yorkers.

The siblings were part of a tight-knit group who had spent their boisterous early years in the White House. Their 43-year-old father, the youngest president to date, not only tolerated his six children’s antics but frequently encouraged them. (Although he did draw the line when a portrait of President Andrew Jackson was decorated with spitballs.) Upon hearing that his brood was planning an “attack” on the White House, he sent the children a message through the War Department advising them to call it off. Adding to the general chaos were dozens of pets, among them a small bear, a badger named Josiah, a hyena and Archie’s Shetland pony, Algonquin, who had free access to the children’s bedrooms.

So by the time the Roosevelts decided to go into business together, their bond was firmly established. It was Kermit, then 29, who first pitched the idea to the others, who ranged in age from 31 to 21. Having spent a few years in South America (exploring the Amazon Basin of Brazil with his father, managing a bank in Buenos Aires), he became intrigued by the region’s coffeehouses, which not only served up fresh-ground beans but also had a much more leisurely pace than those in the States did.

Coffeehouses were not new to New York City, says Joshua Reyes of the Sagamore Hill National Historic Site, Theodore Roosevelt’s former home, “but they catered to recent immigrants, or what was then called ‘more of the foreign element.’ So I think with Prohibition, they were thinking, Maybe we can cater to a more mainstream audience.”

At the time, the idea of encouraging customers to linger was virtually unheard of. “Do the managers really intend to have their patrons stay beyond the conventional period required to ‘gobble and git’?” a bemused reporter wrote in the Outlook magazine. “Apparently they do.” Using premium, fresh-ground coffee was similarly rare. Most coffee served in restaurants or at home was preground and came in a can, or, worse, was instant—a habit picked up by soldiers who had been liberally supplied with coffee powder during World War I.

The Roosevelts’ Brazilian Coffee House opened in November 1919 in a brownstone building at 108 West 44th Street to great fanfare (“Roosevelts Start Coffee House Chain; Houses Similar to the Ancient Institutions of London to be Established,” began a multitiered New York Times headline), with interior design reportedly handled by Ethel Roosevelt. The walls, papered with a green and gold print of Brazilian bamboo, were hung with portraits of celebrated coffee lovers, such as Voltaire (who allegedly downed 50 cups a day), Shakespeare and the Bull Moose himself.

Thirty small oak tables and chairs were grouped around the room. As an analog precursor to Starbucks’ laptop brigade, each table at the Brazilian Coffee House had a compartment furnished with ink, envelopes and paper (inscribed with “Brazilian Coffee House”). Dictionaries and encyclopedias (the free Internet of the day) were kept within reach. “What we desire to do,” Philip Roosevelt told a reporter, “is to provide a place for people to come, where they can talk, write letters, eat sandwiches and cake, and above all, drink real coffee.”

Coffee beans were roasted on the premises, then prepared at a large counter in the center of the room. The store’s manager, A.M. Salazar, a young Brazilian, was an ahead-of-his-time coffee snob. He sniffed that Americans “don’t really know how to appreciate good coffee” and killed the taste by boiling it too long.

Salazar schooled customers on proper preparation with elaborate demonstrations in which he ground the coffee while they waited and poured water over a “specially prepared strainer.” Like the exacting, if at times insufferable, baristas of the 21st century, he lectured them on proper temperature and roasting. Salazar also counseled against adding milk or cream, which he felt caused indigestion, but he surrendered if customers asked.

The timing for the Roosevelts’ venture was ideal: Prohibition hit two months after opening day, and coffeehouses filled the vacuum left by shuttered bars. “New York has to thank Prohibition for one blessing,” opined a writer at the Janesville (Wisconsin) Daily Gazette, “and that is the establishment of a modern coffee house, where it is possible to obtain a cup of coffee that is coffee and not tannic acid soup. It also has to thank the Roosevelt family...[for its] new and picturesque enterprise.”

The Brazilian Coffee House was forced to change its name in 1921. Salazar, it turned out, had once owned a Brazilian Coffee House on Pearl Street, and when he sold it, the new owners retained the name and served legal notice to the Roosevelts. Eager to avoid litigation, they settled instead on the Double R Coffee House, for Roosevelt and TR’s nephew Monroe Douglas Robinson, who had also joined the venture.

The Double R eventually grew to four locations in New York City, all named after South American regions: the original Brazilian branch, which moved a few doors up 44th Street, and survived a fire (TR’s widow, Edith, happened to be there, and calmly sipped her coffee as it was brought under control); an Argentine outpost; a Colombian (where thieves once tried to steal an oil portrait of TR); and an Amazon. The siblings planned on taking their chain national—Archie scouted sites in Chicago and planned similar trips to Boston and Philadelphia.

They ended up staying local, but the coffeehouses did achieve Philip’s wish of bringing different people together. The Brazilian location, in the theater district, was a favorite gathering place for actors, artists, newspapermen and musicians. Among its patrons was the then little-known purveyor of pulpy American gothic fiction, H.P. Lovecraft; his circle of friends, known as the Kalem Club, was known to frequent the Double R. Lovecraft even wrote a fevered ode, “On the Double R Coffee House.”

Despite the chain’s success, by the end of the ’20s, the Roosevelts’ attention shifted elsewhere. In 1928, Ted Jr. and Kermit were making complicated plans for the most Rooseveltian of expeditions, sponsored by Chicago’s Field Museum: a lengthy exploration of Indochina to collect plant and animal specimens, among them the elusive giant panda, one of which they shot (the skin endures in a museum diorama). “And in the late ’20s Ted Jr.’s political career started to take off,” Reyes points out. “So that may also be why he wanted to dump it.”

One potential buyer was the Maxwell House company, which, according to a memorandum in Kermit’s papers at the Library of Congress, made inquiries in 1927. The company had maintained a Roosevelt affiliation for years, claiming that when T.R., as president, visited Andrew Jackson’s estate near Nashville, on October 21, 1907, he took a sip of Maxwell House and declared it “good to the last drop.” “Teddy Roosevelt Gave Popular Slogan to Maxwell House Coffee,” the company boasted in what reads like sponsored content in the Southwestern Railway Journal in 1921.

Probably not, says Heather Cole, curator of the Theodore Roosevelt Collection at Harvard’s Houghton Library. “T.R. did stop in Nashville in October 1907, and was a notoriously big coffee drinker,” she says. “But unfortunately, there is no reliable evidence that he did utter the phrase ‘good to the last drop.’” (Nonetheless, the website of Kraft Foods, current owner of the Maxwell House brand, cites the “legend” in its list of “fun facts” about the coffee.)

In the end Maxwell House did not take over the Double R. It was bought in 1928 by a couple whose romance had begun there five years earlier.

Unlike T.R., whose likeness would be featured in Maxwell House ads through mid-century, his relatives moved on from the coffee business. New Yorkers would have to endure nearly a century of mostly mediocre coffee before that guy from Brooklyn had the new-again idea of serving good fresh-ground beans in a relaxed atmosphere. 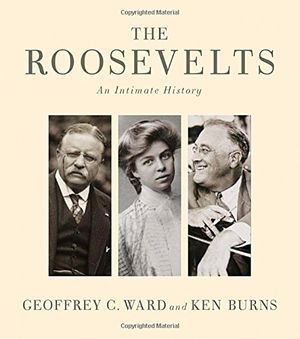 The Roosevelts: An Intimate History

Jancee Dunn is a former staff writer for Rolling Stone, for which she wrote 20 cover stories. She has also written for GQ, the New York Times, O: The Oprah Magazine and Vogue, and worked as an entertainment correspondent for "Good Morning America." She also published a memoir, But Enough About Me, and helped Cyndi Lauper with her autobiography.