Two hundred years ago, the Battle of Waterloo marked a historic turning point in European history when French forces, led by Napoleon, fell to the British and Prussians—ending French reign of the region and two decades of war. As photographer Sam Faulkner points out, the battle was also the last major European conflict to take place prior to the invention of the camera. As such, no photographs exist of the event or the soldiers involved beyond the imagined ones.

Faulkner’s new book, Unseen Waterloo: The Conflict Revisited, envisions what those photographs could have looked like, featuring portraits of Waterloo re-enactors, clad in ornate military garb and staring straight into the camera after they’ve just come off the battlefield. The photos were shot in a pop-up studio on the field in Belgium where Waterloo was fought, taken during annual reenactments over the course of five years, starting in 2009.

Faulkner, who has previously photographed several conflicts, including the cocaine wars in Colombia, sought for this project to highlight the individual in a battle that included more than 200,000 seemingly interchangeable soldiers. Including images of young and old, from both sides of the war, this series strives to provide faces to the landmark event where 54,000 soldiers (more than one in four) were killed or injured.

Life-size images of the portraits, which include vibrant standing shots as well as cavalrymen on horses, will be on display in an exhibition at Somerset House in London, from June 12 to August 31. Faulkner spoke with Smithsonian.com about the motivation behind this photo collection, the emergence of the war photographer and how images reduce the distance between an observer and the soldiers in a conflict.

What was the first point of inspiration behind creating these portraits?

I’ve spent a lot of time covering various conflicts in Afghanistan, Colombia and places like that. I wanted to find a way of talking about conflict without showing the conflict—trying to photograph something that wasn’t there. The idea was to create portraits of soldiers as they came off the battlefield of a historic battle—imagine what soldiers would have looked like as they stepped off the field at Waterloo.

Really, the inspiration was trying to see whether there was something I could say about a historical conflict—bring some kind of understanding and look at it in a new way.

What is the new understanding you hope people gain from seeing these images?

Waterloo, certainly much more than later conflicts, is so much characterized as the battle between Wellington and Napoleon. It’s very much framed as a battle between two of the greatest generals that ever lived, whereas if you look at for example, 100 later at the First World War, the generals in that war were very much disregarded. You know, history has been very unkind to the generals of that war. It’s all about the brave men who fought there.

I think something changed over that period. And one of the things that happened is the invention of photography—so instead of forgetting about the men that died because we no longer have pictures of them, the men of the First World War are remembered. Maybe there’s a pin box in some attic of your great-great grandfather who fought in that war. It’s much easier to remember the individual men that fought because we have those photographs.

One of the things I was trying to do was make people think about it in more democratic terms—in terms of the individuals that were fighting rather than just Napoleon and Wellington, because they are not included in the work.

I made a point of the work being about unnamed soldiers, as opposed to the ones who we already know.

Were the stories that you knew about particular soldiers that you wanted to make sure got told in this series?

When I started this project, I had a very broad idea of the Battle of Waterloo, but it’s become more nuanced over the five years I’ve been working on it. When I first turned up, I didn’t quite know what to expect and every year I went with a slightly different motivation based on what I had seen previous years.

I was very pleased in 2013 to shoot cavalrymen on horseback, a vantage point that gives you a different sense of perspective of what his job was and how he went into battle. In the exhibition we are having in London, those photos are actually going to be life-sized and very dramatic in their set-up.

When did you become interested in Waterloo as an event you wanted to recapture in photographs?

2009 was when it began. I didn’t expect it to be a five-year project with an exhibition six years later. From that first shoot, I realized that this was going to be something worth continuing with. There was something more interesting in what I expected from that shoot and something that needed redoing.

One of the important things about the project is the scale of it—I’ve shot 250 to 300 people in total. In order to represent an epic battle like Waterloo, I think it needed some scale in terms of the quantity of people.

What exactly about your first experience made you want to go back and do more?

One of things that surprised me was the military discipline. I thought I would be able to set up my studio and drag some re-enactors over to take some photos. But it didn’t quite work like that.

Once they’re in rank, in unit, they have to follow command and ask their commanding officer if they can go. They can't leave a drill, a parade or anything like that. It was much harder to find time to shoot these people between all their disciplined maneuvers than I really expected. I thought it was going to be more like a themed camping free-for-all, but it isn’t like that at all. They take it incredibly seriously.

When I got back to London and I was looking at the pictures, I really sensed that there was tension, this ambiguity about whether they’re real or fake. You don’t immediately look at them and think they’re re-enactors. Obviously they are and the quality of the photograph is very different to the technology that was around at that time. They are in a studio, isolated and separated from the background, but it feels like they are living in the battle. They’ve got black marks around their lips like soldiers would have. There’s a sense they don’t just feel like people wearing antique dress.

And then the anniversary was a few years away, so I felt like I needed to carry it on.

You mentioned that getting portraits of soldiers, like these, versus an action shot of a conflict is very different. Could you describe more what each respectively brings to the viewer?

I think there is something very staged about these pictures—they are standing in an artificial environment and being lit and they are looking straight down the lens. It’s a very different relationship the viewer would have to the person standing in front of them than a reportage shot.

The thing I definitely wanted to avoid was going to a reenactment and shooting reportage and creating this artificial reality of trying to shoot something that was fake, in a real way.

I thought to perpetuate the recreation of the scene, lighting it and having them standing directly in front of the camera in a directed pose would make it more like the first portraits ever taken of soldiers. When photography first started, there was not a lot of action because the film was very slow. One of the things you could do was landscape and the other was portraiture. To some extent portraiture was harder because the exposures were 30 seconds and people waiting had to sit quite still.  They had neck braces to hold people still while they were having their portraits taken.

During the American Civil War, most soldiers were having tiny portraits made. Photography had democratized portraiture overnight. So you had rich and poor, black and white, north and south, all having their portraits made. They were, on the whole, quite formal, sitting in front of the camera, looking straight ahead.

I wanted to do something quite classical.

What forces do you see as catalyzing the emergence of the war photographer?

War is one of those very primal things within humanity. It’s so deeply ingrained within societies: trying to understand conflict and the scale of misery and devastation it can bring. I think the most interesting photography is always trying to explore and understand something.

War is probably one of the hardest things to understand. Why are we so destructive against each other?

One of the other powerful things about photography is the connection it makes between the viewer and the subject. One of the objectives of my photography is to narrow the distance between a viewer and subject—to make the person looking at the picture to be closer to the person in the picture, than they perhaps would have been. To understand a little bit more about their condition and what their lives were like. This is the way that photography can explore the human condition and narrow the distance between people on the other side of the world. 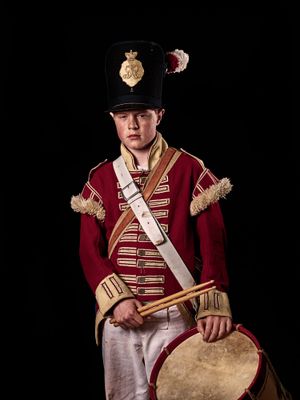