Mere days before the Declaration of Independence was signed in July 1776, 20,000 spectators gathered in a field where Manhattan’s modern-day Chinatown lies. All together, soldiers and citizens alike, they amassed the largest crowd to watch a public execution in the colonies at the time. Two days earlier Thomas Hickey, a member of the elite guard responsible for protecting George Washington, was convicted of mutiny and sedition, and on the morning of June 28, 1776, was hanged for his crimes.

Although he was the only one executed, Hickey, it turns out, was part of a much larger scheme, one concocted by British loyalists to assassinate Washington, who at the time was commander-in-chief of the Continental Army. This bit of lost history lies at the center of Brad Meltzer’s new book The First Conspiracy (co-written with Josh Mensch). Meltzer rose to the top of the bestseller lists with his political thriller novels including Dead Even. In advance of his first non-fiction book, which hits shelves this week, the thriller writer spoke with Smithsonian.com about the intricate and dramatic plot to kill Washington, how the episode gave rise to the U.S.’s counterintelligence efforts and what we can learn from it today.

What did George Washington represent to the American colonists at the time?

We think of George Washington as being so confident and so perfect. But, when he first got the job to lead the army, he was in way over his head. He had been an officer in the past, but he wasn’t very high ranking. When the war started, he hadn’t worn a uniform for more than a decade.

Suddenly, he has to build a continental army and lead it against the mighty British. He was a modest person thrust into this role with huge responsibility, and the first thing he says to everyone is, “I’m not good enough to do this, and if we fail it’s on me.”

But, this honesty made everyone realize that they could trust him. That's why he's the great hope, because they actually have faith in him. In any great leader, it's not about being the boss or beating your chest, but it's about, I think especially back then, in a group that had so many conflicting voices, was one person that they could all trust. I think he was just the epitome of that.

Who was trying to kill George Washington?

At the start of the Revolutionary War, the governor [appointed by the royal government] and the mayor of New York, both British loyalists, successfully turned some of Washington’s personal guards against him. They were ready to strike, but Washington found out. The conspirators were arrested and interrogated in secret. Then Washington gathered 20,000 troops and citizens in an open field and had one ringleader hanged for all to see. That sent a clear message to the Loyalists without revealing the plot. 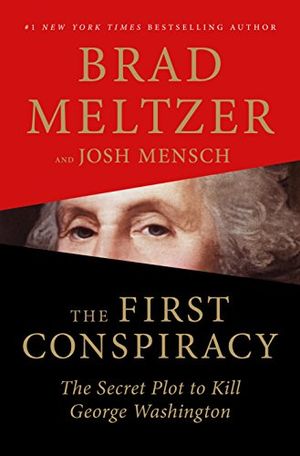 The First Conspiracy: The Secret Plot to Kill George Washington

Taking place during the most critical period of our nation’s birth, The First Conspiracy tells a remarkable and previously untold piece of American history that not only reveals George Washington’s character, but also illuminates the origins of America’s counterintelligence movement that led to the modern day CIA.

Why did the British find it so easy to turn American soldiers and even his personal guards to their side?

Americans love to tell the story that we were this ragtag group who saw a common goal, and we all got together, and we all won the day. It just wasn't that simple. We were an actual mess. One observer said [the colonials] were, “the most wretchedly clothed, and as dirty a set of mortals as ever disgraced the name of a soldier.”

We weren’t soldiers at all. We were farmers and common laborers, ex-criminals, beggars, some suspiciously old, some suspiciously young. We were carrying pitchforks and shovels as weapons, other people have no weapons at all. We're not one united fighting force. We're wearing uniforms from the local militias from Massachusetts, Connecticut, Rhode Island, New Jersey. A majority are wearing dirty work shirts and tattered pants.

Why are people switching sides? Because we were getting creamed. Because we may lose. It's cold. We have no weapons. It's a disaster. When you have a moment where you think we're going to lose, that's the first moment where people say, “Maybe I should switch sides.”

This isn’t the Revolution we get in high school.

When we think about the Revolution, we think about the colonists here who are fighting the British coming from over there. In reality, there were lots of people in the colonies who took the side of the British, and lots of people from England who joined the colonial side. Some people changed allegiances back and forth. This created an environment of distrust and fear. It also led to lots of double-crossing and espionage.

How was the plot discovered?

The New York Provincial Congress had established the Committee on Conspiracies, a top-secret team of civilians with a mission to gather information about the enemy and detect and thwart the enemy’s intelligence operations. As the plot against Washington got bigger, people started to talk, and this little committee—led by lawyer and Continental COngress delegate John Jay—wound up bringing the whole thing down. It was the beginning of America’s counterintelligence efforts.

Why don’t we know this story better?

The assassination plot is hidden history. When the British were coming, the last thing Washington wanted to say was, “Hey, everyone, my own men just turned on me.” That is not the picture of leadership you want when you are in charge of the military. It’s clear to me that he didn’t want anyone to know this story.

How did you come across this story?

I found the story where all good stories start, which is in the footnotes. I can’t even tell you what book it was. It was almost a decade ago. I was going through the footnotes, and I saw this story. I remember going, “Wait, they were trying to kill George Washington. Is that real? Is that fake? Is that something that you just find on the internet?”

I made my way to historian Joseph Ellis, who wrote one of the great books on George Washington, and said, “You know anything about this story?” Of course, he had heard about it, but I remember him saying to me that at the time, everyone involved, including George Washington’s inner circle, their entire purpose was to ensure that there was no record of their actions. We were dealing with a story that was about spies. He said, “You can find the number of slaves at Mount Vernon. You’ll never find all his spies. By its nature," he said, "this is something that will always be elusive.”

After a career of writing fiction thrillers, this is your first non-fiction book. What was it like to switch forms?

For me, fiction and non-fiction are actually surprisingly quite similar. A good story is a good story, all you need are interesting characters, and the human drama that goes along with it.

I will say being able to “make stuff up” is the very best part of fiction. The problem is when you make stuff up in a thriller, you have to work harder to come up with a story that's believable.

But, look what happens in this book. If I told my editor that I want to write about a President, and that the people he trusts may be plotting to kill him at the same time that his great enemies are invading from another continent, and, oh yeah, it's also when the Declaration of Independence was being drafted, and this is all happening at the same time. Well, my editor would tell me, no one would believe that. There are coincidences in fiction, but in non-fiction anything can happen.

One of the most striking aspects of George Washington's leadership during this time was his modesty, in public and in private. Remember when modesty and humility were great American values? He was appointed to a position of great power, but he never made it about his own ego or his personal ambition.

Today, we celebrate those who, whether it's on Facebook or Twitter or anywhere else, are really good at getting attention for themselves, who beat their chest and are good at saying, “Look at me.”

George Washington was not that person. He didn't brag or boast. He realized that to hold his army together and maintain the support of the public and the Continental Congress, he had to maintain an image of impeccable integrity and good character. Perception matters and all eyes were on him. He had to inspire trust. He made mistakes from a military point of view, and he took the criticism for it, but it was hard to doubt his honesty and his devotion to the cause.