Our Ten Most Popular Stories of 2020

From Anglo-Saxon artifacts to copper’s antibacterial properties, systemic racism and murder hornets, these were the most-read stories of the year 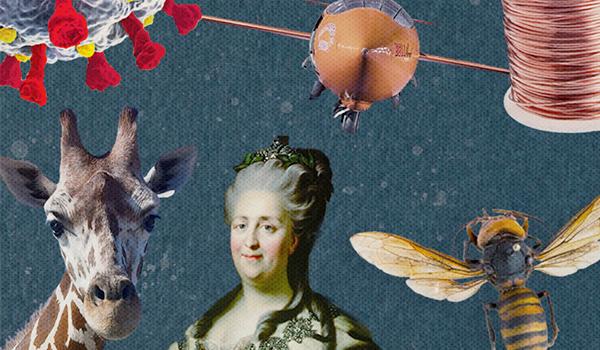 This year's top stories included an explainer on murder hornets, a list of fun facts about love and sex in the animal kingdom, and a look at the true history behind Hulu's "The Great." Illustration by Meilan Solly / Photos via public domain, Pikist, PNGMart, Washington State Department of Agriculture, Royal Commission for AlUla

The year 2020 will go down in history as one of the most extraordinary in modern recollection. A devastating pandemic dominated conversations and our coverage, which detailed why the race for a coronavirus vaccine runs on horseshoe crab blood, explained how to avoid misinformation about Covid-19 and drew lessons from the past by examining diaries penned during the 1918 influenza pandemic. This summer, when a series of protests sparked an ongoing reckoning with systemic racism in the United States, we showed how myths about the past shape our present views on race and highlighted little-known stories about the lives and accomplishments of people of color. Toward the end of the year, amid one of the most bitterly divisive elections in recent history, we delved into the lengthy debate over mail-in voting and the origins of presidential concession speeches.

Despite the challenges posed by 2020, Americans still found reasons to celebrate: Ahead of the 100th anniversary of women’s suffrage, we profiled such pioneering figures as Geraldine Ferraro, the first woman nominated as vice president by a major party, and Fannie Lou Hamer, who fought to secure black voting rights. In the cultural sphere, the discovery of dozens of intact Egyptian coffins thrilled and amazed, as did the reemergence of a long-lost Jacob Lawrence painting. From murder hornets to Venice’s new inflatable floodgates, Catherine the Great and the Smithsonian’s new open-access platform, these were Smithsonian magazine’s top ten stories of 2020.

Our most popular story of 2020 underscored the value of skillful art restoration, presenting a welcome counter to the many botched conservation attempts reported in recent years. As the National Museum of Scotland announced this December, experts used a carved porcupine quill—a tool “sharp enough to remove … dirt yet soft enough not to damage the metalwork,” according to a statement—to clean an Anglo-Saxon cross for the first time in more than a millennium. The painstaking process revealed the silver artifact’s gold leaf adornments, as well as its intricate depictions of the four Gospel writers: Saint Matthew as a human, Saint Mark as a lion, Saint Luke as a calf and Saint John as an eagle. Per writer Nora McGreevy, the cross is one of around 100 objects included in the Galloway Hoard, a trove of Viking-era artifacts found by amateur treasure hunters in 2014.

While most of England was on lockdown during the Covid-19 pandemic, archaeologist Matt Champion unwittingly unearthed more than 2,000 artifacts beneath the attic floorboards of Tudor-era Oxburgh Hall. Highlights of the trove included a 600-year-old parchment fragment still adorned with gold leaf and blue lettering, scraps of Tudor and Georgian silks, and pages torn from a 1568 copy of Catholic martyr John Fisher’s The Kynge’s Psalmes. Detailing the find in an August article, McGreevy noted that British nobleman Sir Edmund Bedingfeld commissioned the manor’s construction in 1482; his devoutly Catholic descendants may have used the religious objects found in the attic during secret masses held at a time when such services were outlawed.

3. Copper’s Virus-Killing Powers Were Known Even to the Ancients

In March, when the world was just beginning to understand the novel coronavirus, researchers learned that the SARS-CoV-2 virus—the pathogen that causes Covid-19—survives for days on glass and stainless steel but dies in a matter of hours if it lands on copper. (In later months, scientists would find that airborne transmission of the virus carries the greatest risk of infection, rather than touching contaminated surfaces.) The metal’s antimicrobial powers of copper are nothing new: As Michael G. Schmidt, a microbiologist and immunologist at the Medical University of South Carolina, told writer Jim Morrison this spring, “Copper is truly a gift from Mother Nature in that the human race has been using it for over eight millennia.” Crucially, copper doesn’t simply dispatch unwanted pathogens at an incredibly fast rate. Its bacteria-combating abilities also endure for long stretches of time. When Bill Keevil and his University of Southampton microbiology research team tested old railings at New York City’s Grand Central Terminal several years ago, for instance, they found that the copper worked “just like it did the day it was put in over 100 years ago.”

4. No, Americans Do Not Need to Panic About ‘Murder Hornets’

Another unwelcome surprise of 2020 was the rise of the Asian giant hornet, more infamously known as the “murder hornet” due to its ability to massacre entire hives of bees within hours. The first confirmed sightings of the insects in North America occurred in late 2019, but as Floyd Shockley, entomology collections manager at the Smithsonian’s National Museum of Natural History, pointed out in May, observers need not panic, as the hornets don’t realistically pose a threat to human health. Honey bees are more susceptible to the predators, but as Shockley said, “[I]s it going to be global devastation? No.” Still, it’s worth noting that officials in Washington state have since found and eradicated a nest thought to contain about 200 queens. Left unchecked, each of these hornets could have flown off and started a colony of its own. Efforts to contain the invasive species are ongoing.

5. Venice’s Controversial Inflatable Floodgates Save City for the Second Time

In October, an engineering feat saved Venice from flooding not once, but twice. The barrier system of 78 giant, inflatable yellow floodgates—known as Mose—can currently be deployed to protect the Italian city from tides measuring up to three-and-a-half feet high. Upon its completion next year, Mose will be able to protect against tides of up to four feet. The floodgates’ installation follows the declaration of a state of emergency in Venice. Last year, the city experienced its worst floods in 50 years, sustaining more than $1 billion in damages and leaving parts of the metropolis under six feet of water. Built on muddy lagoons, Venice battles both a sinking foundation and rising sea levels. Despite the floodgates’ current success, some environmentalists argue that the barriers aren’t a sustainable solution, as they seal off the lagoon entirely, depleting the water’s oxygen and preventing pollution from flowing out.

Desert-dwelling nomads turned master merchants, the Nabataeans controlled a broad swath of land between the Euphrates River and the Red Sea for some 500 years. But in the millennia following the civilization’s fall in the first century A.D., its culture was almost “lost entirely,” wrote Lauren Keith in November. Today, little written documentation of the Nabataeans survives; instead, archaeologists must draw on clues hidden within the empire’s ruins: namely, two monumental cities carved out of rock. One of these twin settlements—the “Rose City” of Petra in southern Jordan—attracts nearly one million visitors each year. But its sister city of Hegra remains relatively obscure—a fact that Saudi Arabia hopes to change as it shifts focus from oil to tourism. As several scholars told Keith, the Middle Eastern nation’s renewed marketing push represents a chance to learn more about the enigmatic culture. “[Visiting] should evoke in any good tourist with any kind of intellectual curiosity,” said David Graf, a Nabataean specialist, archeologist and professor at the University of Miami. “[W]ho produced these tombs? Who are the people who created Hegra? Where did they come from? How long were they here? To have the context of Hegra is very important.”

7. 158 Resources to Understand Racism in America

The May killing of George Floyd spurred nationwide protests against systemic injustice, acting as a call to action for the reformation of the U.S.’ treatment of black people. As Smithsonian Secretary Lonnie G. Bunch wrote in a short essay published in June, Floyd’s death in police custody forced the country to “confront the reality that, despite gains made in the past 50 years, we are still a nation riven by inequality and racial division.” To reflect this pivotal moment, Smithsonian magazine compiled a collection of resources “designed to foster an equal society, encourage commitment to unbiased choices and promote antiracism in all aspects of life,” according to assistant digital editor Meilan Solly. The resources are organized into six categories: historical context, systemic inequality, anti-black violence, protest, intersectionality, and allyship and education.

8. Fourteen Fun Facts About Love and Sex in the Animal Kingdom

Human relationships can be difficult, but at least they don’t involve copulating until your inner organs fail. Yes, you read that correctly—death is the unfortunate fate for the male antechinus, a pint-sized marsupial that literally fornicates until it drops dead. Take similar comfort in the fact that humans don’t need to drink urine to start a relationship, as is the case with giraffes, nor inseminate each other via open wounds, as bed bugs do.

9. The Story of Catherine the Great

Today, stories of Catherine the Great’s salacious, equine love affairs dominate her legacy. But the reality of the Russian czarina’s life was far more nuanced. Ahead of the release of Hulu’s “The Great,” we explored Catherine’s 30-year reign, from her usurpation of power to her championing of Enlightenment ideals, early support of vaccination and myriad accomplishments in the cultural sphere. As Meilan Solly wrote in May, “Catherine was a woman of contradictions whose brazen exploits have long overshadowed the accomplishments that won her ‘the Great’ moniker in the first place.

For the first time in the 174-year history of the Smithsonian Institution, the organization released 2.8 million images from across all 19 museums, 9 research centers, libraries, archives and the National Zoo into the public domain. This initial release represents just two percent of the Smithsonian’s total collection, which boasts 155 million items and counting. It was part of an ongoing effort to digitize—and democratize—the Institution’s collections.

• An excerpt from Jennet Conant’s new book, The Great Secret: The Classified World War II Disaster That Launched the War on Cancer, in which she details how an investigation into a devastating Allied bombing of an Italian coastal town eventually led to an innovation in cancer treatment.

• A time-capsule story from the end of March about how and when we thought the pandemic might end. We were too optimistic about how long Americans would need to “flatten the curve,” and unmentioned in the story was how soon a vaccine would be developed.

• Another entry in our “True History of” series that looked at Tom Hanks’ World War II film from earlier this year, Greyhound

• An exploration of new research that rewrites the demise of Doggerland, a prehistoric land bridge between Britain and Europe