The History Behind the ‘Greyhound’ Movie 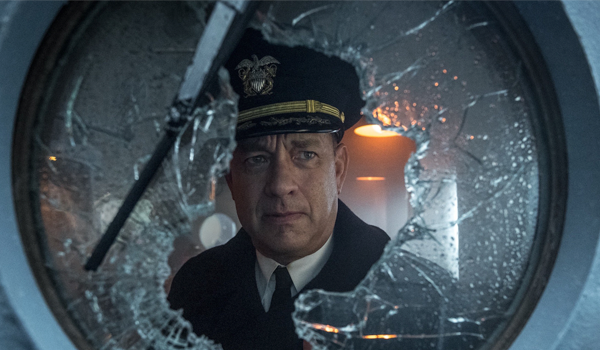 Despite the fact that it was the longest military campaign of World War II, the Battle of the Atlantic—a six-year fight for control of the eponymous ocean—is often overshadowed by other clashes in the European and Pacific theaters.

“It’s not the most glamorous campaign,” says Frank Blazich, lead curator of military history at the Smithsonian’s National Museum of American History.

Put simply, he adds, “The Battle of the Atlantic is cold, grey, monotonous and miserable.”

Tom Hanks’ latest film, Greyhound, spotlights this much-overlooked chapter in naval history, building on the World War II buff’s previous credits (most prominently, Saving Private Ryan, “Band of Brothers” and “The Pacific”) to offer a claustrophobia-inducing dramatization of the battle between Allied ships and German submarines, or U-boats.

Here’s what you need to know to separate fact from fiction ahead of the movie’s July 10 premiere on Apple TV+.

Is Greyhound based on a true story?

In short, no. As the film’s trailer states, Greyhound is “inspired by,” rather than directly based on, actual events. Hanks, who stars as United States Navy Commander Ernest Krause, adapted the screenplay from C.S. Forester’s 1955 novel, The Good Shepherd (not to be confused with the 2006 film The Good Shepherd about the founding of the CIA). Though fictional, the Forester book is deeply researched and noted for its accurate depiction of naval warfare.

Set in the winter of 1942, Greyhound—a nod to the nickname of the U.S.S. Keeling, a destroyer under Krause’s command—features Hanks as a newly promoted officer tasked with leading his first transatlantic convoy through a swath of water known as the “Black Pit.” Per the movie’s official description, Krause must protect his fleet from Nazi U-boats over a five-day period without air cover. In true cinematic fashion, the captain ultimately battles not only a military enemy, but his own personal demons and self-doubt.

“What you did yesterday got us to today,” a crew member tells Krause in the trailer.

“It’s not enough,” The captain replies. “Not nearly enough.”

What events does Greyhound dramatize?

Greyhound takes place at a critical moment in the Battle of the Atlantic, which began in September 1939 and only ended with the Germans’ surrender on May 8, 1945. As Blazich explains, the conflict was centered chiefly on supplies: An island nation, the United Kingdom required a steady flow of imported goods and raw materials, many of which originated in the U.S. The Soviet Union, besieged by the Nazis’ Operation Barbarossa, was also in dire need of food, oil and other essential supplies, which arrived via seaports on the Arctic Ocean.

“Had the Atlantic been lost, so too would have Britain,” writes historian James Holland for History Extra. “There would have been no Mediterranean campaign, no D-Day, no VE or VJ Days. The vast, global supply chain upon which the Allies depended … would have been cut, and with it the lifeline.”

Winston Churchill coined the phrase “Battle of the Atlantic” in March 1941, “deliberately echoing the Battle of Britain to emphasize its importance,” according to the Imperial War Museum. Later in life, the prime minister famously claimed that the “only thing that ever really frightened me during the war was the U-boat peril.” (It’s worth noting, however, that modern historians have since questioned Churchill’s handling of the Atlantic campaign.)

The Allies’ main strategy for ensuring cargo’s safe arrival in Europe was sending merchant ships in convoys, or groups escorted by warships and, if possible, aircraft. Though this approach saved many Allied vessels from destruction, the logistical nightmare of moving 40 ships as a cohesive unit greatly reduced individual units’ efficiency, leaving them vulnerable to U-boat hunting squads known as wolf packs.

In the early years of the battle, Germany held the naval advantage, easily picking off weakly defended merchant ships, albeit while sustaining heavy losses of its own. After the U.S. entered the conflict in December 1941, U-boats enjoyed great success off the East Coast: Between January and July 1942, 90 ships (including four U-boats) sank off the coast of North Carolina, and more than 1,100 merchant seamen died, according to the Monitor National Marine Sanctuary. This tenuous period serves as the backdrop to Greyhound, whose trailer declares, “The only thing more dangerous than the front lines was the fight to get there.”

A submarine-versus-destroyer duel hinted at in the clip and depicted in The Good Shepherd shares similarities with a real-life clash between the U.S.S. Borie and U-boat U-405. On November 1, 1943, the American destroyer was attempting to ram the German submarine when a wave sent its bow crashing down on top of the submarine, trapping the ships in a “lethal embrace,” wrote Howard R. Simkin for Naval History magazine in 2019. For the next ten minutes, crew members unable to properly aim the destroyer’s guns at such close proximity barraged the U-boat with “every rifle, submachine gun [and] machine gun they could find,” says Blazich. U-405 sank that night; the badly damaged Borie was scuttled the following day.

Such close encounters were rare during the Battle of the Atlantic, which was more often fought with torpedoes and depth charges. Still, Blazich notes, “There were one or two of these freak incidents where the hunter and the hunted were [so] close that they could literally see each other.”

Advances in Allied technology—juxtaposed with the “increasing obsolescence” of standard U-boat designs, in the words of historian G.H. Bennett—shifted the tide of battle as the conflict stretched on, and by May 1943, victory was all but guaranteed.

Though the Germans were losing the Battle of the Atlantic, they still managed to stop a sizable amount of supplies from reaching the Allies, says Blazich. “It gives Hitler time, if nothing else,” he adds. “It becomes a delaying action for the Germans, as they essentially fight the Soviet Union, and then later the American and British forces.”

Over the course of the six-year battle, as many as 80,000 Allied sailors, merchant mariners and airmen were killed. An estimated 28,000 to 30,000 U-boat crewmen died—a staggering rate amounting to roughly 70 percent of the 41,000 German sailors who fought in the campaign.

In addition to the high cost in human lives, both sides suffered significant material losses. Between 1939 and 1945, the Allies lost more than 2,700 merchant ships; in that same time, around 800 of Germany’s 1,100 U-boats sank.

The Battle of the Atlantic wasn’t the most “glamorous” campaign, says Blazich. Instead, it was “a very complicated battle that require[d] massive amounts of coordination, the development of new weapons technologies, tactics [and] science.” Among other tasks, crew members worked to improve radar and sonar, finetune the use of explosives, and intercept enemy intelligence.

“Logistics,” notes the curator, “are one of the most critical components of war.”

What was life at sea like during the Battle of the Atlantic?

Allied and Axis sailors had divergent experiences at sea, with the latter facing especially precarious conditions. U-boats offered little in the way of comfort and accommodation. Most had just two toilets, one of which was almost always filled with extra provisions, food supplies and spare parts, leaving one working bathroom shared among 50 men. The submarines lacked air conditioning and heating, sanitation measures, and even adequate refrigeration.

“It’s very hard, rough work,” says Blazich, “and it can be very boring. U-boats can go on entire patrols and never see another ship.”

On the flip side, U-boat missions could be incredibly dangerous, particularly toward the end of the war as Allied equipment improved: “These men that have gone through months and months, maybe years, of training, their first attempt to go to sea, they’ll get sunk literally within sight of land in some cases, maybe no more than a day out of port.”

Forester’s novel is told from its protagonist’s point of view, meaning that readers never see what life is like on the other side of the battle. If Greyhound adopts the same storytelling approach, consider watching Wolfgang Petersen’s 1981 film Das Boot, which captures the “boredom, filth and sheer terror” experienced by U-boat crews.

U.S. Navy sailors enjoyed more “crude comforts” than their German counterparts, but destroyer duty was “equally cold, wet and nauseating,” according to Blazich. Crew members had to balance long periods of monotony with the constant need to stay alert. When traveling in a convoy, for instance, sudden orders to change direction meant upward of 40 ships had to coordinate their movements simultaneously. For captains like Hanks’ fictional Krause, leading a fleet to safety meant processing incomplete information quickly and making decisions in a matter of seconds.

Uncertainty dominated sailors’ days, as the enemy could strike at any time. U-boats survived through stealth, traveling on the surface by night and submerging during the day. Allied ships strove to not only cross the ocean by successfully thwarting German attacks, but also actively track down and destroy enemy submarines.

If a U-boat spotted a convoy and escaped unscathed, it could radio the vessels’ location to headquarters or collaborate with a “wolf pack of colleagues to intercept and to launch a mass attack,” observes Krause in The Good Shepherd. If, however, the U-boat was destroyed, none “of this could happen; if she were even kept down for an hour or two while the convoy again made good its escape, the business of finding the convoy again would be made much more difficult for the Germans, much more prolonged, possibly too difficult altogether.”

Overall, says Blazich, “It’s stressful. Out in the cold and the salt spray and the bouncing movement of the destroyer and everything else, it just makes for a very less than ideal experience.”

He concludes, “If you’re a merchant sailor, you don’t know if the ship you’re on at any moment will suddenly explode. You don’t know if it is hit and you have to go in the water, will you be found? … If you’re a survivor, you hope to God you get in a lifeboat, and then you hope that somebody picks you up. Otherwise, you’re done.”