During World War I, No Man’s Land was both an actual and a metaphorical space. It separated the front lines of the opposing armies and was perhaps the only location where enemy troops could meet without hostility. It was in No Man's Land that the spontaneous Christmas truce of December 1914 took place and where opposing troops might unofficially agree to safely remove their wounded comrades, or even sunbathe on the first days of spring.

But it could also be the most terrifying of places; one that held the greatest danger for combatants. “Men drowning in shell-holes already filled with decaying flesh, wounded men, beyond help from behind the wire, dying over a number of days, their cries audible, and often unbearable to those in the trenches; sappers buried alive beneath its surface," wrote scholar Fran Brearton in her 2000 history The Great War in Irish Poetry: W.B. Yeats to Michael Longley. No Man’s Land, said poet Wilfred Owen, was “like the face of the moon, chaotic, crater-ridden, uninhabitable, awful, the abode of madness.”

In the Oxford English Dictionary, Nomanneslond, ca. 1350, comes from the Middle English, and was “a piece of ground outside the north wall of London, formerly used as a place of execution.” The phrase took on a military connotation as early as 1864, but it became an especially prevalent term during the First World War. The German equivalent was Niemandsland, while the French used the English term le no man’s land.

But it was during the Great War that a legend arose out of the real-life horrors that occurred in this wartime hellhole. Part Night of the Living Dead and part War Horse, like all oft-told tales, it had several variants, but the basic kernel warned of scar-faced and fearless deserters banding together from nearly all sides—Australian, Austrian, British, Canadian, French, German, and Italian (though none from the United States)—and living deep beneath the abandoned trenches and dugouts. According to some versions, the deserters scavenged corpses for clothing, food and weapons. And in at least one version, the deserters emerged nightly as ghoulish beasts, to feast upon the dead and dying, waging epic battles over the choicest portions.

Historian Paul Fussell called the tale the “finest legend of the war, the most brilliant in literary invention and execution as well as the richest in symbolic suggestion” in his prize-winning 1975 book. Fussell, a professor of English at the University of Pennsylvania who had served as a lieutenant during World War II, knew well the horrors of combat, which he vividly described in his 1989 Wartime.

One of the earliest published versions of the “wild deserters” legend appeared in the 1920 memoir The Squadroon by Ardern Arthur Hulme Beaman, a lieutenant colonel in the British cavalry. No other telling of the legend—at least in print—is as horrifying as Beaman’s. Written just two years after the war’s end, Beaman's tale begins in early 1918 on the marshes of the Somme in northern France. This is where some of the bloodiest battles of the war were fought and Beaman is convinced that he has witnessed two dozen or so German prisoners of war vanish into the ground. He wants to send a search party into the maze of abandoned trenches but is advised against it because the area “was peopled with wild men, British, French, Australian, German deserters, who lived there underground, like ghouls among the mouldering dead, and who came out at nights to plunder and to kill. In the night, an officer told him, mingled with the snarling of carrion dogs, they often heard inhuman cries and rifle shots coming from that awful wilderness as though the bestial denizens were fighting among themselves.”

In the 1930 novel Behind the Lines (or The Strange Case of Gunner Rawley, its title in the U.S.) by Walter Frederick Morris, who had served in the war as a battalion commander, the protagonist Peter Rawley, a second lieutenant, deserts his Royal Field Artillery unit after killing his company commander. Somewhere on the battlefields of France, Rawley meets up with Alf, another deserter, who leads him underground. “Rawley squeezed through the hole, feet first. He found himself in a low and narrow tunnel, revetted with rotting timbers and half-blocked with falls of earth. . . . The whole place was indescribably dirty and had a musty, earthy, garlicky smell, like the lair of a wild beast. . . . ‘Where do you draw your rations?’ asked Rawley. . . . ‘Scrounge it, [Alf] answered, . . . We live like perishin’ fightin’ cocks sometimes, I give you my word. . . . There’s several of us livin’ round ’ere in these old trenches, mostly working in pairs.”

Another gruesome description of wartime outlaws and deserters came in the 1948 five-volume autobiography Laughter in the Next Room by Sir Osbert Sitwell, a fifth baronet and a captain in the Army (he was also the younger brother of the poet Dame Edith Sitwell). In recalling Armistice Day 1918, Sitwell wrote, “For four long years . . . the sole internationalism—if it existed—had been that of deserters from all the warring nations, French, Italian, German, Austrian, Australian, English, Canadian. Outlawed, these men lived—at least, they lived—in caves and grottoes under certain parts of the front line. Cowardly but desperate as the lazzaroni of the old Kingdom of Naples, or the bands of beggars and coney catchers of Tudor times, recognizing no right, and no rules save of their own making, they would issue forth, it was said, from their secret lairs, after each of the interminable checkmate battles, to rob the dying of their few possessions—treasures such as boots or iron rations—and leave them dead.” Sitwell’s concluding note is equally chilling: British troops believed “that the General Staff could find no way of dealing with these bandits until the war was over, and that in the end they [the deserters] had to be gassed.”

A more recent literary account comes in 1985 from No Man’s Land by Reginald Hill, author of some 50 novels, many of them police procedurals. The novel begins with Josh Routledge, a British deserter from the Battle of the Somme, and a German soldier-turned-pacifist, Lothar von Seeberg, being chased by mounted military police. Out of almost nowhere, a band of 40 deserters, mostly Australian, attack the military police, and take Josh and Lothar into their dugout. “They were a wild-looking gang, in dirty ragged clothing and with unkempt hair and unshaven faces. They were also very well armed.” In a second instance, these deserters come “swarming out of nowhere, out of the bowels of the earth, that’s how it looked. . . . They was scruffy, dead scruffy. Sort of rugged and wild-looking, more like a bunch of pirates than anything. There was one big brute, nigh on seven foot tall he looked.”

The legend seems to have also taken root in modern journalistic accounts. James Carroll in the International Herald Tribune noted in 2006 how World War I deserters refusing to fight “had organized themselves into a kind of third force—not fighters any more, but mere survivors, at home in the caverns. Dozens of them, perhaps hundreds. Human beings caring for one another, no matter what uniform they were wearing.” According to Carroll’s interpretation, these deserters were like angels, taking care of those who had fallen into the safety of the underground caverns—acting as a sane alternative to the insanity of war.

The wild deserters of no man’s land, whether angels or devils—or even flesh-eating ghouls who emerge only at night—is the stuff of a legend extremely rich in symbolic value. It reminds us today, a century after it began, of the madness, chaos and senselessness of all the horrors of war. The Great War in Irish Poetry: W. B. Yeats to Michael Longley 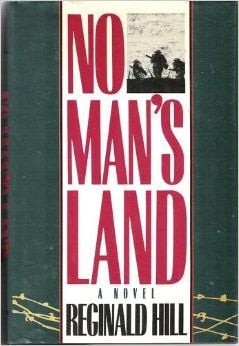 Reginald Hill has been widely published both in England and the United States. He received Britain's most coveted mystery writers award, the Cartier Diamond Dagger Award, as well as the Golden Dagger for his Dalziel/Pascoe series. He lives with his wife in Cumbria, England.