This month marks 50 years since the death of one of history’s most quotable people. Churchill’s speeches, letters and published works contain an estimated 15 million words—“more than Shakespeare and Dickens combined,” London Mayor (and Churchill biographer) Boris Johnson tells Smithsonian.

The downside to Churchill’s prolificacy is it’s easy to put words in his mouth. Like Oscar Wilde and Mark Twain, Churchill attracts false attributions like a magnet. “People tend to make them up,” says Richard Langworth, the editor of four books of authenticated Churchill quotations, who estimates that at least 80 famous sayings attributed to the British Bulldog weren’t necessarily uttered by him.

That infamous Lady Astor exchange, for instance, probably took place between her and Churchill’s friend F.E. Smith, a statesman, and even then Smith was perhaps quoting an old joke. Churchill’s “Courage is what it takes to stand up and speak; courage is also what it means to sit down and listen”—recently quoted by Washington Redskins quarterback Robert Griffin III—has no known connection to Churchill at all. But connoisseurs of Churchillian ripostes can rest easy that his legendary rejoinder to a female politician who called him drunk is a confirmed matter of historical record—even if he did adapt it from a line in the W.C. Fields movie It’s a Gift. “Tomorrow, I shall be sober,” Churchill replied, “and you will still be disgustingly ugly.” (In the film, the victim was merely “crazy.”)

Quoting Churchill accurately is not only tricky—it can be costly. Because of a decades-old copyright arrangement with his literary agency, Churchill’s estate charges a fee to quote from almost everything he published, including speeches. The fees go to a trust controlled by institutions and heirs. The licensing requirement doesn’t cover Churchill’s off-the-cuff remarks or, says his estate’s agent Gordon Wise, brief quotations in journalism or criticism permitted as fair use.

For his 2012 book Churchill Style, Barry Singer, who owns a Churchill-themed bookstore in Manhattan, says he paid 40 cents a word to quote from his subject. “I literally cut quotes to come in under a certain budget,” Singer says. 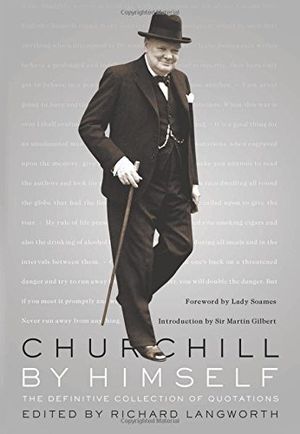 Churchill by Himself: The Definitive Collection of Quotations

A powerful, persuasive speaker and notorious wit, Churchill is one of the twentieth century’s most oft-quoted leaders—and one frequently misquoted or quoted out of context. Yet his actual remarks were often much wiser and wittier than reported. "Churchill By Himself" is the first exhaustive, attributed, and annotated collection of Churchill sayings. Edited by a longtime Churchill scholar and authorized by the Churchill estate, the quotations provide the first wholly accurate record of the esteemed statesman’s words.