When one thinks of the worst industrial accidents in United States history, the Triangle Shirtwaist Factory fire of 1911 springs to mind. One-hundred-forty-six workers, most of them poor, Jewish and Italian immigrant women and girls, died when a fire engulfed three floors of the factory’s building. Horrifyingly, the stairwell doors and exits were locked, standard operating procedure for supervisors hoping to maximize productivity, curb theft and keep out union organizers. The sole fire escape collapsed as the workers tried to flee and the firefighters’ rescue ladders couldn’t extend high enough, leaving dozens of the women to jump to their deaths.

The tragic incident spurred a number of labor regulations, such as New York’s mandate for better fire safety efforts and workplace ventilation, and began a national conversation about what the government can or should do to prevent such occurrences. Leading New York politicians like Al Smith, the reform-minded governor and 1928 Democratic presidential candidate, and Francis Perkins, the labor activist who would become FDR’s secretary of labor, ushered in a shift in governance that prioritized worker safety. In this post-Triangle era, the social contract was re-written to ensure a safety net, meant to protect the vulnerable members of society.

Eighty years after Triangle, a fire broke out at an Imperial Food Products plant in Hamlet, North Carolina, when a fryer ignited and flames fed off grease and oils on the factory floor. As the fire raged, the building’s sprinkler system failed, forcing workers to run through heavy smoke. Desperate to find exits, only to find locked doors, the victims collapsed into piles of bodies as the carbon monoxide overtook them. Of the 81 employees working at the time, 25 died and an additional 40 were injured. 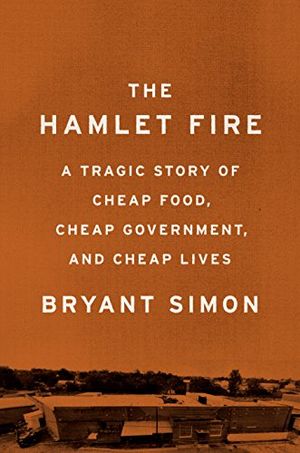 Eighty years after the Triangle Shirtwaist Fire, industrial disasters were supposed to have been a thing of the past. After spending several years talking to local residents, state officials, and survivors of the fire, award-winning historian Bryant Simon has written a vivid, potent, and disturbing social autopsy of this town, this factory, and this time that shows how cheap labor, cheap government, and cheap food came together in a way that was bound for tragedy.

Why the Hamlet fire happened, and why so little changed culturally and politically to improve safety at worksites around the country in its aftermath, is central to a new book by historian Bryant Simon, a professor at Temple University. The Hamlet Fire: A Tragic Story of Cheap Food, Cheap Government, and Cheap Lives functions as its own assembly—or disassembly—line, intent on figuring out, step by step, how this tragedy was manufactured. It wasn’t just the locked doors, or the lack of safety drills—although those certainly contributed.

Rather, Simon examines how systems at work—both at Imperial and in the wider food production industry—like deregulation (either by law or lack of enforcement), a growing demand for cheap labor, a culture of silence and intimidation among workers and management, and changes to the meat industry itself, with its shift in the 1980s to highly processed, mass-produced chicken products made at the plant, were integral to the conflagration. And all of these elements, Simon argues, fit into a larger pattern of American society depreciating workers’ lives while elevating and prioritizing the notion of “cheap” in the consumer marketplace. This “addiction to cheap as a solution to many things is so embedded [in our culture] that it only allowed us to kind of look at the tragedy, without thinking of its deeper consequences,” says Simon.

Hamlet, located less than ten miles from the South Carolina border, was once a vibrant, growing town. At the turn of the 20th century, the Seaboard Railway company brought maintenance and shipping jobs to Hamlet and carried in visitors who frequented the shops along the main street. But during the consolidation of train companies from the late 1960s to the 1980s, the town lost its railroad jobs, and many of Hamlet’s citizens were left to take work wherever they could find it—even at factories that were skirting the laws. In researching his book, Simon spoke with former Imperial workers who made clear that although they knew the factory was unsafe, they felt powerless to confront management lest they lose their paycheck. And organizing for better workplace safety and pay was a non-starter, Simon explains, as Imperial would likely have fought unionization at every step. “The odds of winning a contract didn’t make it worth the investment [for national unions],” says Simon.

The workers couldn’t count on their local government to help them either. Desperate to increase employment in the struggling town, Hamlet’s leadership looked the other way as the processing plant flouted guidelines and rules to a shocking degree. Imperial’s owner, Emmett Roe, previously owned a plant in Pennsylvania but had moved his operations to Hamlet after the Occupational Safety and Health Administration (OSHA) levied fines for dozens of violations at that factory. Created in 1970 by President Nixon, OSHA empowered the government to set and enforce safety standards for laborers, but the government office was consistently underfunded. And, when states formed their own occupational safety and health (OSH) offices, most were set up to favor businesses over workers. Even Jimmy Carter, who campaigned on a pro-worker platform, ended up pulling back on OSHA funding as inflation challenged the nation’s economy.

According to Simon, Roe came to the South looking for leniency, and he found it. He never registered his plant with North Carolina’s labor department or OSH office, and by neglecting to do so, as required by state law, he ensured it would never be inspected. Throughout the years, small fires broke out in the factory, horrible smells seeped into the neighborhood and globs of fat entered Hamlet’s water supply—all with minimal interference from city authorities.

Using the Hamlet fire as a case study in nationwide trends, Simon’s book makes a larger argument about American society’s turn against the concerns of blue-collar workers, and the breakdown of workplace regulations put in place to protect them. He points to the political dialogue that dominated the preceding decades and the resulting policy impacts—from the economic downturn of the late 1970s, to the deregulation of the 1980s and the decades-spanning decline of the unions. During this time, Simon writes, many Americans began to believe that “more business, less regulation and fewer unions…could decrease prices, create more jobs and cure the country’s economic ills.” Jim Hunt, the governor of North Carolina (who served on and off from 1977 to 2001), echoed that sentiment, “If business prospers, so will workers.” Hamlet officials agreed; letting Roe and others operate without oversight was a form of “benign neglect,” the city manager later said.

The Hamlet fire was a predictable result of the food production industry’s antipathy toward oversight, and the hands-off approach taken by the U.S. government. Structural and conditional similarities to Imperial Food Products were likely replicated in factories throughout the country. Simon points out a telling and troubling statistic: By 1991, there was only one federal inspector for every 4,666 worksites across the country.

Without government scrutiny, the responsibility to follow the law fell on the business owners, who—typified by Roe’s management of Imperial—rarely obliged. “If they actually abide by the law, they’re at a competitive disadvantage,” Simon says. “Deregulation and the lack of enforcement of laws is like a contagion.” By the ’80s, he writes, the system grew dependent on neglect, with businesses assuming no compliance officers would ever make a visit. More often than not, they were right.

Just as the Triangle Shirtwaist Factory employed mostly vulnerable, financially insecure immigrant women and girls, the Hamlet fire’s victims were the underprivileged. Simon doesn’t shy away from the intrinsic role that race, class and gender played in the tragedy. Those who made decisions about Imperial’s safety protocols—the city, state and federal officials—were removed from the experiences of the workers impacted by them. Of the 25 who died in the fire, 12 were African-American and 18 were women, many of whom were single mothers.

In the aftermath of the Imperial fire, some reforms were enacted: North Carolina lawmakers hired more investigators for the state’s OSH department and fire departments instituted more regular inspections, but these policy changes remained local. While the tragedy received national media attention, it faded quickly from memory, unlike the enduring infamy of the Triangle fire.

Simon argues that the nation was quick to forget Imperial because Americans and their leaders were unwilling to reckon with the human costs of what he calls the “cheap” economy, which saturated every aspect of the factory and fire. The workers were paid cheaply to make cheap products that were sold for cheap prices.

The Hamlet fire remains a historic footnote, explains Simon, because to question and change the status quo would make life more expensive and less comfortable for the general public. Decades after the tragedy, the desire for cheap products still dictates the economy: Americans are spending less and less of their income on food and clothing. But that tempting, cheap price tag doesn’t reflect the very real, devastating human and environmental cost, from the fast food industry, where workplace injuries are commonplace, to fast fashion, which relies on vulnerable, neglected labor abroad. Rather, it’s a myth consumers are buying into, and one workers are suffering from.