The cry in Manhattan’s Washington Square Park rose over the syncopated sounds of a jazz combo and a loudspeaker blasting rap. Clustered near the park’s iconic arch, about 200 protesters joined a chant. “End the lockdown!” they shouted. “Abolish ‘Covid zero’!” A college student threaded past the participants, handing out blank sheets of white paper.

The small crowd that gathered in New York on December 4 had joined an extraordinary moment some 7,000 miles away. Days before, in late November, hundreds of Chinese citizens stood in the cold night air of Shanghai, Beijing and Guangzhou, holding aloft fresh sheets of paper in a silent demand for freedom from the country’s zero-Covid policies, which have imposed draconian restrictions in an effort to eliminate the coronavirus entirely within the country’s borders. Their strategic shows of defiance continued a long global tradition of silent protest, in which activists register their discontent with wordless marches and long hunger strikes, by kneeling down or taping their mouths shut, or—in certain punitive societies—fighting propaganda and lies with blank pieces of paper.

Hushed protests invite the public to fill in the blanks and add their own grievances. “It’s a space for the imagination,” says Christopher Rea, a scholar of modern Chinese literature at the University of British Columbia in Canada. “It’s meant to be a provocation for anybody looking on. The blank piece is deliberately trying to frustrate this surveillance regime.”

Three years into the Covid-19 pandemic, China still aimed to suppress the virus through monthslong lockdowns, travel restrictions, workplace shutdowns, ubiquitous tracking through cameras and cellphones, and rigorous daily testing. The protocols are sometimes carried out with brute force and what residents describe as an indifference to human suffering. Lockdowns purportedly meant to halt disease have instead caused avoidable deaths; on social media, users speculated that one such shutdown played a role in an apartment fire that killed ten people in Urumqi on November 24.

China’s citizens know that despite the presence of infections, the rest of the world has—for better or worse, with the safety net of effective vaccines and antiviral drugs—returned to an almost pre-pandemic existence. People elsewhere go to offices, shop at malls, travel abroad and cheer from the stands at World Cup matches. Virtually nowhere except China has a government continued to keep its citizens housebound, as was the norm worldwide in the pre-vaccine era of 2020.

Whether China’s zero-Covid strategy is working is up for debate, particularly given the government’s tendency to undercount cases and deaths. President Xi Jinping has staked his claim to power on the policies’ success. But as the virus morphs with ever-new variants, case numbers are spiking (in part due to the use of less-effective local vaccines), and unrest is mounting. Blanket suppression is the government’s preferred method of containing Covid-19, argues the nascent White Paper Movement on its website, “because the epidemic is the best way to strengthen social control and maintain domination.”

Launched on November 28, the grassroots campaign initially asked for an end to lockdowns that have pushed millions into joblessness and poverty, stalling the nation’s economic growth. The crowds that came out to shout down riot police later expanded their demands to call for democracy, an end to censorship and even the removal of Xi, who abolished legal term limits in 2018 to potentially remain in office for life. In a country where dissidents can disappear into black-site prisons for years while awaiting trial, the public outcry stunned even some participants.

Days after the show of widespread discontent, the Chinese government eased many of its most restrictive Covid-19 rules and policies—a move that experts say could spark waves of infections and deaths in a country ill equipped to handle mass hospitalizations.

“There’s no way to share real thought in China,” said the paper pusher at the Manhattan protest, who gave his name as “Rick” (a handle the undergraduate admitted was fake, as he was nervous about the government causing trouble for his family back in Guangzhou). Rick had friends who’d joined the rallies at home, where censors stayed busy erasing any mention of the protests from social media, sometimes in seconds. He explained, “The blank paper means we want to say that every social class has their own demands. [We] want to be treated with dignity of the person, to make a living. [We] want democracy.”

Silent protests around the world

Protests are usually thought of as big, noisy, sometimes raucous affairs, where agitated participants clamor for change with catchy chants and splashy banners. But silence can be an equally effective tool for sparking change.

In an authoritarian state with mass censorship, simple words and images can become crimes. Owning silence under such circumstances creates power, says Jeffrey Wasserstrom, a historian specializing in modern Chinese history at the University of California, Irvine. When a protester joins a crowd and says nothing, they deny the state the tools to suppress. A silent citizen’s words cannot be taken away or used against them.

Police in Nizhny Novgorod arrested a demonstrator today for protesting with a blank sign. Welcome to Russia in 2022. pic.twitter.com/YprwDqex8V

In recent years, protesters worldwide have confronted their governments with blank slates. Earlier this year, Russians who opposed Vladimir Putin’s invasion of Ukraine were roughly removed from the streets after holding up blank pieces of paper in response to a law that banned uttering or publishing the word “war” in reference to the military campaign.

In Hong Kong in 2020, citizens stunned by the arrival of a new security law lodged their fury by holding up fresh sheets of printer paper. Authorities have arrested nearly 200 people under the law; one man was sentenced to nine years in jail for carrying a flag bearing the banned slogan “Liberate Hong Kong, revolution of our times.”

The history of silent protest

The auditory version of the blank sheet is, of course, silence. Protesting wordlessly was a technique employed by Black Americans in July 1917, when an estimated 10,000 citizens, organized by religious groups and the NAACP, marched down Fifth Avenue in Manhattan to protest racial violence and discrimination. As the New York Times reported, “Those in the parade represented every negro organization and church in the city. They marched, however, not as organizations, but as a people of one race, united by ties of blood and color, and working for a common cause.”

In September 1968, tens of thousands of students staged a silent march calling for greater democracy in Mexico. Contradicting the Mexican government’s accusations that they were resorting to violence, the students protested by simply carrying flags. (Around this same time, civil rights activists in the United States wielded flags with similar goals in mind.) “You’re taking the symbols of the regime and exposing the illegitimacy of the regime at the same time,” says David Meyer, a sociologist at the University of California, Irvine.

Other protests have employed more obvious symbols of repression, including handcuffs, blindfolds and gags. The last of these became widespread as a political prop following the trial of the Chicago Seven (originally eight), antiwar protesters who were charged with inciting a riot at the 1968 Democratic National Convention in Chicago. During the 1969 trial, the judge ordered defendant Bobby Seale to be gagged and chained to his chair.

Decades before football player Colin Kaepernick created a stir by kneeling during the national anthem, Black athletes silently used their status to fight oppression. At the awards ceremony for the 200-meter dash at the 1968 Summer Olympics in Mexico City, medalists Tommie Smith and John Carlos each raised a clenched gloved fist in a call for global human rights.

The operating theory behind silent protests is that when the cause is clear and righteous, there’s no reason to yell about it—a principle demonstrated by more recent examples of silent protests, too. In 2009, a peaceful rally in Iran against unfair elections ended in gunfire and explosions. To vent their fury, hundreds of thousands of Iranians met at Tehran’s symbolic central roadway, Islamic Revolution Street, and marched quietly to Freedom Square, hoping to avoid a police crackdown. In 2011, protesters in Riyadh, Saudi Arabia, stood quietly in solidarity with activists detained without trial by the country’s regime. Multiple times in Hong Kong, lawyers have marched in silence to protest Beijing’s incursions into the city’s constitution and legal affairs.

Standing in for silence

Slogans, jokes, objects and colors can stand in for complex sentiments. In Hong Kong, protesters carried yellow umbrellas—also useful to defend against pepper spray—as symbols of their demand for democracy. In Thailand, protesters borrowed a gesture from The Hunger Games series, saluting with three fingers aloft in the aftermath of a military coup. Elsewhere, rainbow flags and the name “Solidarity” have signified the successful fights waged by proponents of LGBTQ and Polish labor rights, respectively.

In some authoritarian nations, dissidents craft jokes and images to build a following and weaken support for the regime. In the Cold War-era Soviet Union, access to typewriters and photocopiers was tightly controlled. But protesters could share news and rile officials with underground samizdat literature (Russian for “self-publishing”), which was hand-typed and passed around from person to person. These publications also used anekdoty, or quips of wry lament, to joke about post-Stalinist Soviet society. In one example, a man hands out blank leaflets on a pedestrian street. When someone returns to question their meaning, the man says, “What’s there to write? It’s all perfectly clear anyway.”

In the early 20th century, generations of Chinese writers and philosophers led quiet philosophical and cultural revolutions within their country. Zhou Shuren, better known by the pen name Lu Xun, pushed citizens to cast off repressive traditions and join the modern world, writing, “I have always felt hemmed in on all sides by the Great Wall; that wall of ancient bricks which is constantly being reinforced. The old and the new conspire to confine us all. When will we stop adding new bricks to the wall?”

In time, Chinese citizens mastered the art of distributed displeasure against mass censorship and government control. That was certainly the case during the movements that bloomed after Mao Zedong’s death in 1976. At the 1989 protests in Beijing’s Tiananmen Square, participants used strips of red cloth as blindfolds. Before the tanks turned the weekslong gathering into a tragedy on June 4, musician Cui Jian played the anthem “A Piece of Red Cloth,” claiming a patriotic symbol of communist rule as a banner of hope for a frustrated generation.

After hundreds, if not thousands, were gunned down by the military, China banned any reference to the events at Tiananmen Square. But Chinese people became adept at filling that void, using proxies and surrogates to refer to the tragedy. Though Chinese censors scrub terms related to the date, such as “six four,” emoji can sometimes circumvent these measures. According to Meng Wu, a specialist in modern Chinese literature at the University of British Columbia, a simple candle emoji posted on the anniversary tells readers that the author is observing the tragedy, even if they can’t do so explicitly. In recent years, the government has removed access to the candle emoji before the anniversary.

As a survivor of the Tiananmen Square massacre spoke to the crowd gathered at Washington Square Park, the undergraduate who called himself Rick expressed concern for a friend who had been taken into custody by police in his home province of Guangdong. Given the government crackdown, Rick suggested that public protests were largely finished for now. Still, he predicted, the movement will “become something else”—something yet to be written. 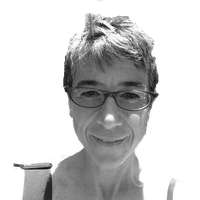 Suzanne Sataline is an independent journalist who is writing a book about Hong Kong’s democracy movement. Her reporting has been published by Wired, the Atlantic, the New York Times, the New Yorker, Politico and Quartz. She is based in New York City and Hong Kong.