How Urban Design Can Make or Break Protests 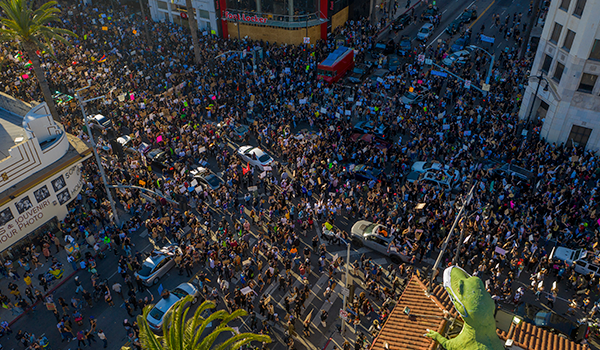 If protesters could plan a perfect stage to voice their grievances, it might look a lot like Athens, Greece. Its broad, yet not overly long, central boulevards are almost tailor-made for parading. Its large parliament-facing square, Syntagma, forms a natural focal point for marchers. With a warren of narrow streets surrounding the center, including the rebellious district of Exarcheia, it’s often remarkably easy for demonstrators to steal away if the going gets rough.

Los Angeles, by contrast, is a disaster for protesters. It has no wholly recognizable center, few walkable distances, and little in the way of protest-friendly space. As far as longtime city activists are concerned, just amassing small crowds can be an achievement. “There’s really just no place to go, the city is structured in a way that you’re in a city but you’re not in a city,” says David Adler, general coordinator at the Progressive International, a new global political group. “While a protest is the coming together of a large group of people and that’s just counter to the idea of L.A.”

Among the complex medley of moving parts that guide protest movements, urban design might seem like a fairly peripheral concern. But try telling that to demonstrators from Houston to Beijing, two cities that have geographic characteristics that complicate public protest. Low urban density can thwart mass participation. Limited public space can deprive protesters of the visibility and hence the momentum they need to sustain themselves. On those occasions when proceedings turn messy or violent, alleyways, parks, and labyrinthine apartment buildings can mean the difference between detention and escape.

Recent unrest across the United States has merely underscored that geographical significance, while also showcasing the ways in which unsatisfactory built environments can fuel ostensibly unrelated grievances. Cities with reduced or tightly regimented public spaces, like New York, have seen some of the fiercest clashes as police move to enforce curfews and other restrictions. Cities with few natural assembly points and massive sprawl, like Phoenix, have often prevented residents from congregating in consequential numbers at all. Boxed into largely sub-divided neighborhoods, cities with particularly pervasive enduring racial segregation, like Minneapolis, appear extra susceptible to protest in the first place.

“When you want to stage a protest, you have to identify a location, you have to think about access, about access, and even how big it is,” says Jeff Hou, a professor at the University of Washington and director of its Urban Commons Lab. “Sometimes people are conscious of these limitations, sometimes less so. But if you’re protesting urban design will come in somewhere.”

The nature of public space has, of course, always been intensely political, and in some ways contemporary protest is just the latest chapter in a millennia-old tussle between rulers and the ruled. Ever since humans first coalesced in cities around 4000 BC, urban design has largely reflected prevailing power structures and priorities, with all the knock-on consequences for ordinary people that comes with them. The agora of ancient Athens, where citizens assembled in the shadow of the Acropolis, was an expression of early democracy. The public execution grounds at Tyburn in London, where many English prisoners were executed until the late 18th century, symbolized state control. Most famously, Paris was partly redesigned by Baron Haussmann from the 1860s to facilitate troop movements through an historically irascible city, as well as modernizing and ‘beautifying’ the medieval core. It’s largely his design that tourists admire today.

But what’s notable, perhaps, about the ongoing protests in the U.S. and many abroad is the extent to which differing urban designs can determine a movement’s success and sometimes even propel different outcomes for the same grievances. In western American cities, like Las Vegas or Salt Lake City, where the car is king, protests still struggle to gain traction among dispersed neighborhoods and vast, easily policed freeway networks. How, for example, are marchers to march or demonstrators to launch sit-ins when they must negotiate such mundane concerns as recovering distant, parked cars? Or lack accessible and symbolic spots to target? It’s consequently often only on the freeways themselves, as after the killing of Trayvon Martin in 2012, that people feel able to make their presence felt.

“Intersections are the closest thing we have to town squares. So protesters know that, block by block, they need to get to them,” says Stefano Bloch, a cultural geographer at the University of Arizona and author of Going All City: Struggle and Survival in LA's Graffiti Subculture. In doing so, “they’re also taking the streets away from cars and taking them back for people.” That protesters appear to have overcome these geographic barriers to gather in strength within many neighborhoods is perhaps testament to the current depth of feeling.

On the East Coast, protesters often face different, if sometimes equally debilitating, challenges. Because while they might enjoy superior mass transit, more densely populated neighborhoods, and less cumbersome distances, they frequently lack access to large or usable public land. In other words, it can be easier to spark the kind of spontaneous mass gatherings on which large demonstrations generally rely, yet every bit as tricky to sustain them beyond the initial trigger. New York’s Occupy Wall Street in 2011 was a case in point. Protesters ultimately struggled amid aggressively enforced restrictions on the use of nearby Zuccotti Park, one of the few substantial open spaces in the financial district.

Across the world, and through the frequent uprisings that have characterized much of the past decade, it’s often been a similar story of urban geography as a protest aid and obstacle. The initial success of Arab Spring revolutionaries in Cairo in 2011 might be explained in small part by the city’s relatively compact size. Around 75 percent of its 20 million plus people live within nine miles of Tahrir Square, David Sims, an expert on urban Egypt, writes in Understanding Cairo, meaning it remained largely accessible by foot even after roads and rail were shut down. The expansive nature of Khartoum, the capital of Sudan, seemingly stymied security forces last year as they tried—and ultimately failed—to scatter opposition to Omar al-Bashir, the country’s longtime dictator. No matter how many open spaces they cleared or squares they blocked off, there was always somewhere for crowds to assemble.

Conversely, the ongoing protests against Algeria’s ossified regime appear to have suffered from inhospitable urban topography. With steep hills, narrow downtown streets and few large central squares, the capital city of Algiers has done its disgruntled residents no favors. “It’s just not made for protesters,” says Kahina Bouagache, an Algerian lawyer, NGO director, and women’s rights activist. “This is the structure of the city. It’s 60 percent hill.” The state may have found it easier to weather public fury as a consequence so far.

Few planners seemingly set out to protest-proof cities from the outset. But mindful of the impact of design, authorities have seldom been shy about re-engineering urban areas to protesters’ disadvantage. Municipal officials in many western countries have turned over tracts of land to private developers, many of whom have made their use contingent on highly restrictive rules. That became starkly apparent when London’s Occupy chapter tried and failed to establish itself on several ‘pops’ – privately owned public spaces, before settling on the steps of St Paul’s Cathedral. Myriad states have reworked traditional rally points so as to inhibit the emergence of large crowds. Among them, Erdogan’s Turkish state has transformed Istanbul’s Taksim Square with barriers and a beefed-up police presence, seven years after it was the centerpiece of the Gezi Park protests.

Most jarringly of all, perhaps, there’s Washington, D.C. Its broad avenues and enormous open spaces were intended as a kind of a counterpoint to Europe’s more cloistered cities, but onerous restrictions since 9/11 have changed much of that. New sunken walkways around the Washington Monument have broken up much of the space around its base, where large crowds often congregated in the past. New walls, new fences, and new barriers have isolated protesters from key government structures. Just initiating a legal protest on the National Mall has become tougher than ever.

“In theory, you need a permit, and it’s a very convoluted process, so if you’re trying to organize it’s difficult to pull off from that perspective,” says Lisa Benton-Short, a professor of geography at George Washington University and author of The National Mall: No Ordinary Public Space. “More than ever I think the National Mall represents a protest landscape, but it’s certainly harder.”

Unwilling to countenance any risk at all, the most uncompromising of authoritarians have gone to even greater lengths to shield themselves from protest power. The Burmese military junta transferred the country’s capital out of bustling Yangon and into a grandiose, lightly-populated new city a decade ago, a move that observers interpreted as at least partly motivated by security considerations. Egypt’s military dictatorship, haunted by its experience of the 2011 revolution, is doing the same in the desert. Other regimes have embraced their own carefully calibrated rally spaces. These days, if you see a mass gathering in Istanbul, it’s most likely to be at Yenikapi Square, where the ruling AKP has held million-man gatherings.

Still, in the perennial contest between state and dissatisfied citizens, protesters haven’t stood idly by either. Protesters in Hong Kong have learned to congregate in small groups, dispersing and then gathering elsewhere as soon as police arrive. Protest organizers elsewhere have learned the importance of emphasizing turnout size. In a nod to the power of optics in a hypermedia age, large open spaces have taken on an even greater significance, especially among groups that might have previously shunned easily dispersed protest grounds. “To be seen is to be heard,” Bloch says.

Chafing at the increasing difficulty of congregating around traditional focal points, like state capitols, U.S. protesters also appear to be seeking out new symbolic sites. Ever since George Floyd was killed in Minneapolis, crowds have frequently gathered near the crime scene.

After decades of tightening constraints, in which public space has shrunk, shifted, or vanished, scholars suggest that urban design itself will only become even more of a protest influence in the coming years. If anything, the pandemic and subsequent lockdowns have merely hammered home to many the importance of these areas. “There’s been this gradually diminishing role of public space in public life,” adds Jeff Hou. “And with Occupy, with BLM, what you’ve seen is a kind of reawakening. It’s almost a kind of pendulum, and it’s swinging back.”