While Thomas W. Smillie is known as the Smithsonian’s first and chief photographer from 1871 to 1917, it is less known that his first and chief assistant, Miss Louisa Bernie Gallaher, was quite an accomplished photographer herself and is responsible for much of the work produced by the photographic laboratory of the United States National Museum (USNM).

Gallaher began working at Smithsonian as a clerk in 1878 at the age of twenty, after her relative, Senator James B. Beck of Kentucky, placed her under the care of Thomas Smillie. Upon seeing some photographs she had made from one of her vacations, Smillie recognized her skills as a photographer and asked for her to be transferred to the photographic department where she worked as a photographer from 1890 until her death in 1917.

Gallaher’s work in photomicrography and x-ray reproductions was highly regarded by the scientific community, and Smillie himself said, “I believe her to be the most successful woman photographer in the United States in scientific illustration.” In addition to her work in scientific photography, Gallaher also photographed living models, portraits, and museum objects. Whenever Smillie was away, the responsibility for managing Smithsonian’s growing photographic force was upon her. Smithsonian employees called upon Gallaher’s expertise on the history and art of photography for the development of Smithsonian’s first photography exhibition in 1913, which included a few of her own works.

While much of the work produced by the USNM photo lab prior to 1917 has, in the past, been credited to Thomas W. Smillie, for the simple fact that his is the only name really documented anywhere in our records pertaining to photography at that time, we are discovering a much richer history. We look forward to expanding credit to Louisa Bernie Gallaher for the magnitude of work she created while in the employ of the United States National Museum. 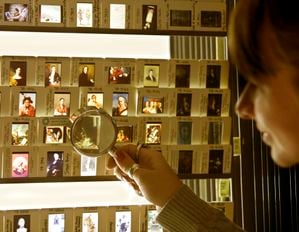 Marguerite Roby is the Photograph Archivist for Smithsonian Libraries and Archives. She manages a centralized body of three million photographic negatives created by Smithsonian photographers between 1870 and 2006 that document a holistic and comprehensive history of the Smithsonian. She enjoys solving photographic mysteries and cleaning up data. Marguerite holds an MLIS from University of Denver, as well as a BA in English Literature.

Dashing Through the Snow in Vintage Sleighs